It may not be surprising that many Democrats and Republicans hold divergent views of President Donald Trump’s behavior and motives in withholding military aid to Ukraine – the issue at the heart of the impeachment saga. But in today’s fragmented news media environment, party identification may not be the only fault line.

The news diets of Democrats and Republicans – that is, what sources they look to for news – are tied to perceptions of the president’s actions regarding Ukraine, as well as the actions there by Democratic presidential candidate Joe Biden, who Trump had asked Ukraine’s government to investigate, according to a new analysis of data from Pew Research Center’s Election News Pathways project. The project is the Center’s yearlong initiative focusing on how Americans’ news habits and attitudes relate to what they hear, perceive and know about the 2020 U.S. presidential election.

The current analysis stems from a survey of 12,043 U.S. adults who are members of the Center’s American Trends Panel, conducted from Oct. 29 to Nov. 11, 2019 – a period during which the U.S. House of Representatives voted to formalize impeachment rules and released some depositions from key witnesses. In addition to several questions related to how much people had heard about various Ukraine events and their views about why certain actions were taken, respondents were asked about their use of 30 different news outlets for political and election news in the past week. Based on this data, researchers analyzed the mix of sources people turned to for news, as well as the political composition of each outlet’s audience. (Please see the adjacent box for details on the study design.)

The categories in this analysis come from a study of how partisans are turning to different outlets for political and election news.

Audience data is derived from those who say they got political and election news from an outlet in the past week. Using this method, six of the 30 news outlets analyzed have audiences who lean to the right politically (including Breitbart and Fox News); 17 have audiences who lean left (including The New York Times and Vice); and seven have mixed audiences (including ABC, CBS and NBC News). Learn how we chose the 30 news sources featured in our project and see the full list by audience composition.

Democrats and Democratic-leaning independents (Dem/Lean Dem) and Republicans and Republican leaners (Rep/Lean Rep) are each divided into three groups based on which news sources they turned to for political and election news in the past week. Those who didn’t get news from any of the 30 outlets in the past week are in a separate group. The portion of Americans in each group is as follows: 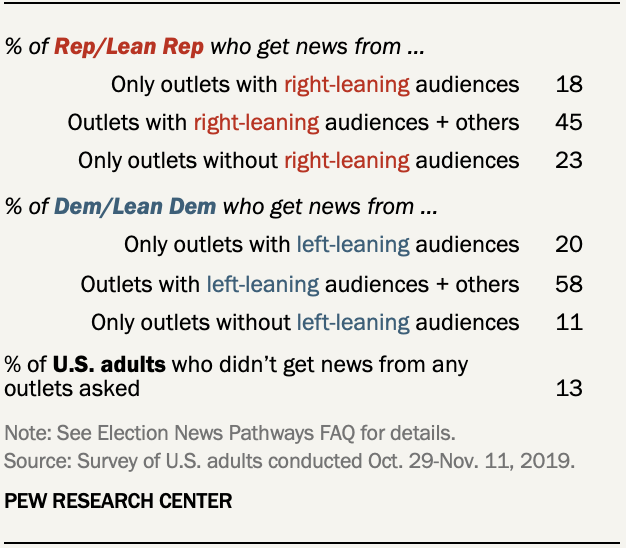 For more detail about these measurements and this study, see the FAQ and the methodology.

Overall, Republicans and Republican-leaning independents who got political news only from outlets with right-leaning audiences had different responses to a survey question about the reason Trump withheld Ukraine aid than did Republicans who got news from some outlets with more mixed or left-leaning audiences. The differences in assessing Trump’s motives don’t stand out as much among Democrats and Democratic leaners with different media consumption habits.

The variation in views about Biden’s involvement in Ukraine was also noteworthy among Republicans with different media consumption habits. Also striking was how many more Republicans had heard about Biden’s storylines than Democrats. This was especially the case when comparing Republicans and Democrats who got news only from outlets with right- and left-leaning audiences, respectively. That exposure gap is evident in how Biden’s actions were viewed.

The question of why Trump withheld aid to Ukraine during the summer of 2019 is a focal point of the political debate surrounding impeachment. 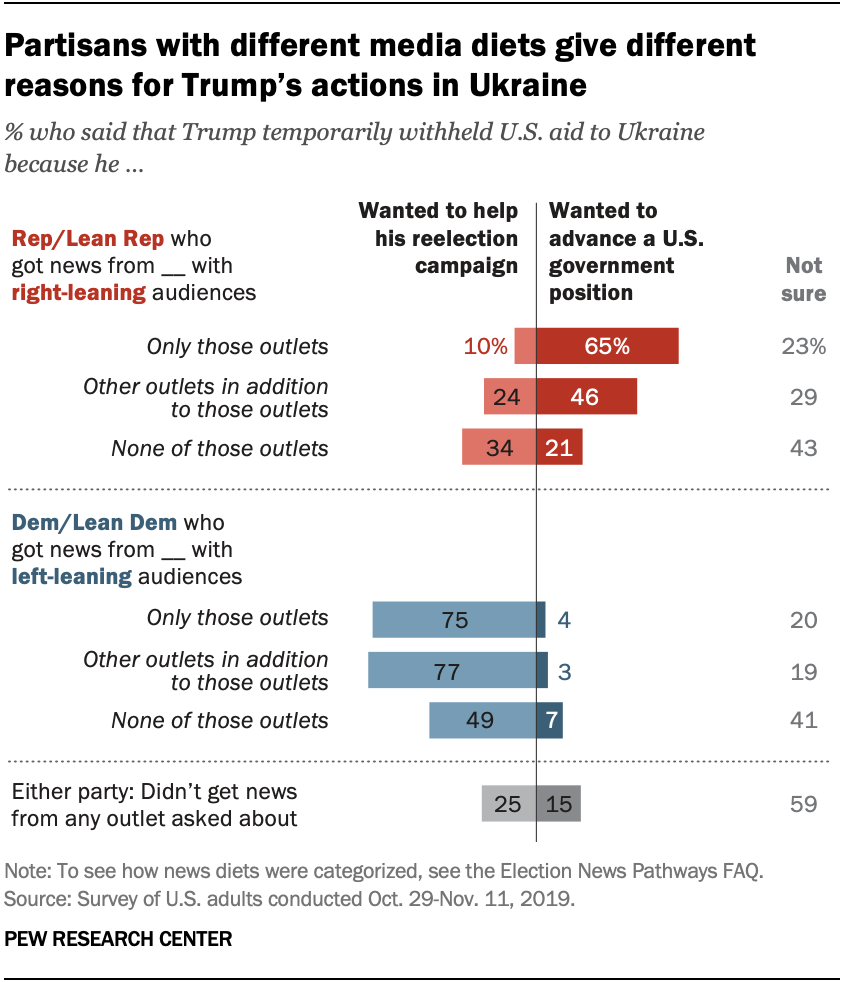 When asked, based on what they heard or read in the news, which of two reasons came closest to why Trump temporarily withheld U.S. aid to Ukraine, responses differed depending on news diet.

About two-thirds of Republicans and Republican leaners who got their political news only from media outlets with right-leaning audiences (65%) said he did it to advance a U.S. policy to reduce corruption in Ukraine. Just 10% of these Republicans said Trump withheld the aid to help his reelection campaign (23% said they weren’t sure). 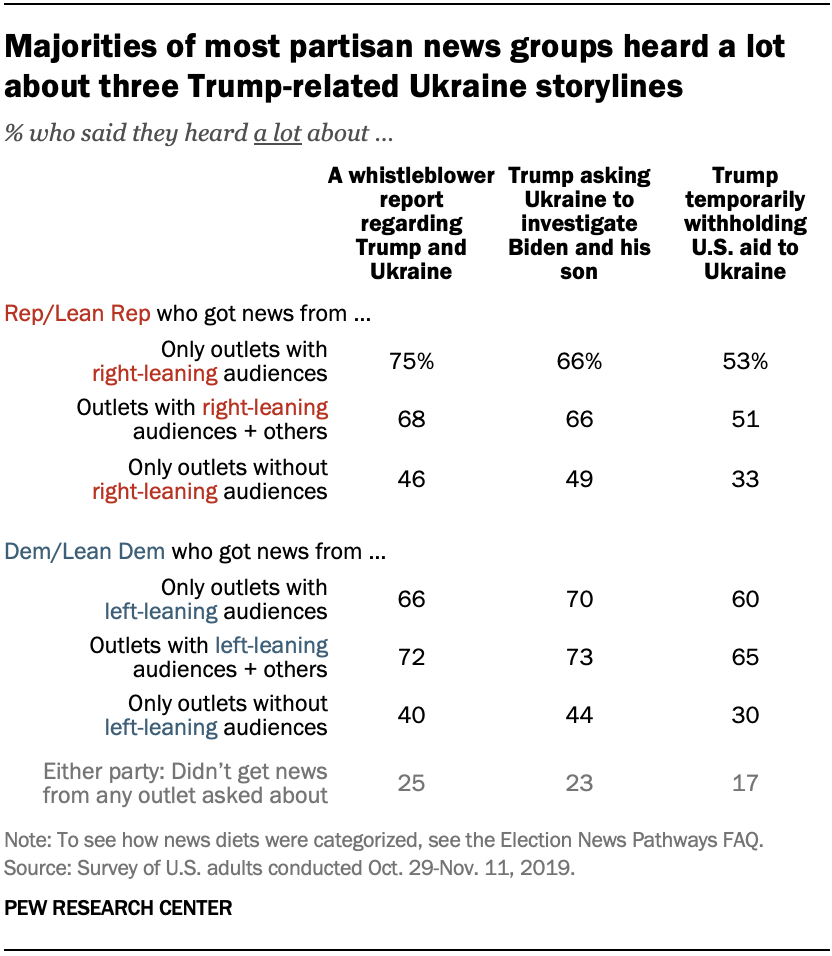 These within-party differences hold true even when accounting for ideology within party. For example, conservative Republicans who got political news only from outlets with right-leaning audiences were more likely to say that Trump was rooting out corruption than were conservative Republicans who got news from outlets with other audience compositions.

In addition to views about motives, the study also asked people how much they had heard about certain Ukraine storylines, including three that involved Trump: his decision to withhold aid, his decision to ask Ukraine to investigate the Bidens and the whistleblower’s report.

This study also asked U.S. adults how much they had heard about two Ukraine storylines related to Joe Biden: his call as vice president for the removal of a Ukrainian prosecutor and his son Hunter Biden’s work for a Ukrainian natural gas company. 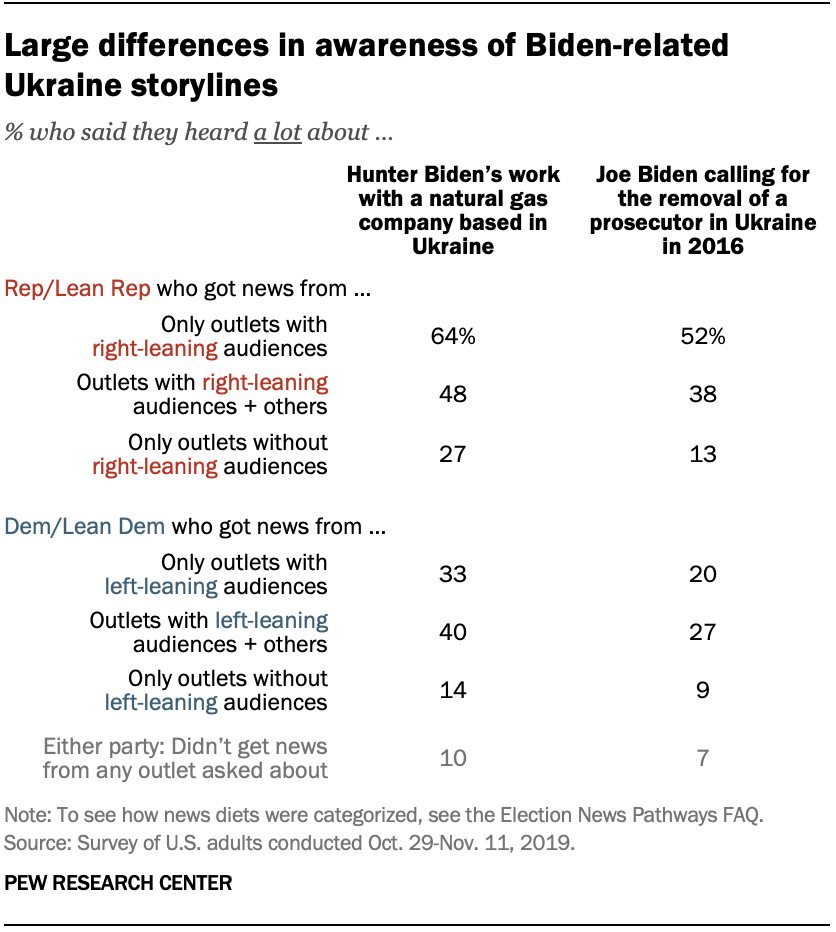 There were notable variations in how much Republicans and Republican leaners with different media diets had heard about each of these stories, as well as smaller differences among Democrats and Democratic leaners who got news from sources with different audience compositions.

For example, about half of Republicans who got political news only from outlets with right-leaning audiences (52%) had heard a lot about Biden’s efforts to remove the prosecutor. That is more than double the percentage of Democrats who got news only from outlets with left-leaning audiences (20%) who heard a lot. The gap is similar on Hunter Biden’s work in Ukraine: 64% of these Republicans had heard a lot, compared with 33% of these Democrats. 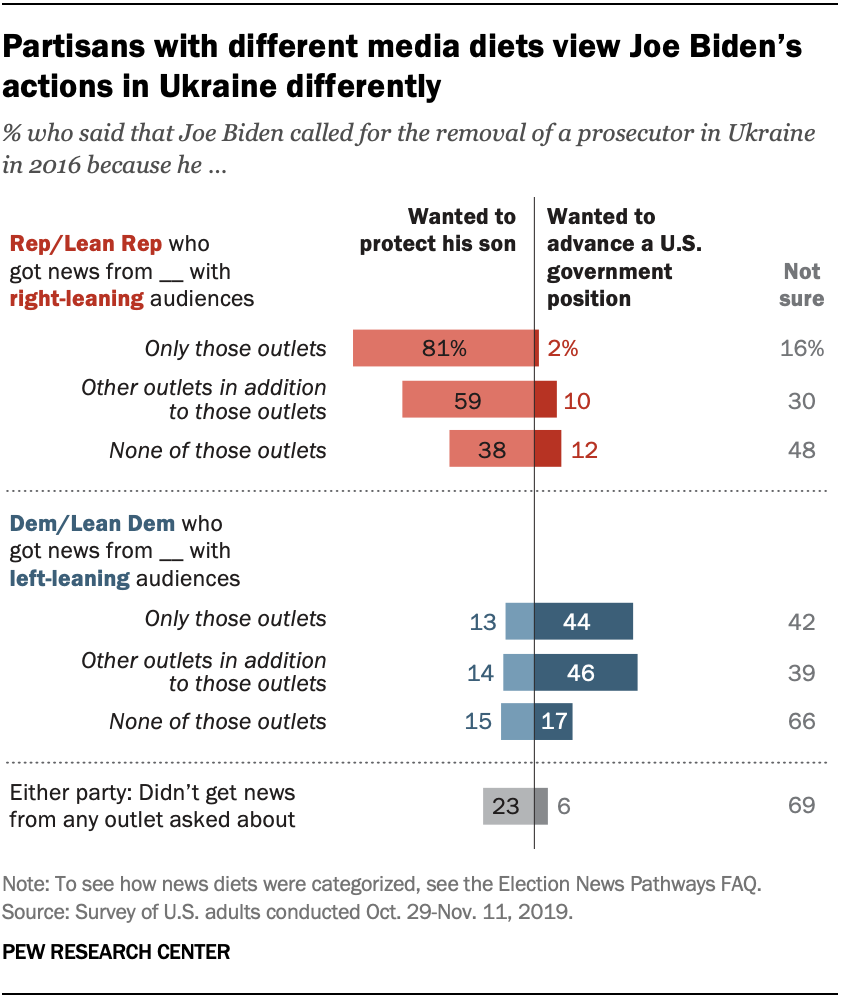 Further, the differences in awareness play out in views about Joe Biden’s motivations. When asked, based on what they had heard in the news, whether they thought Biden called for the prosecutor’s removal in order to advance a U.S. government position to reduce corruption in Ukraine or to protect his son from being investigated, 81% of Republicans who got news only from outlets with right-leaning audiences said he wanted to protect his son. Only 2% of these Republicans thought it was part of a U.S. anti-corruption campaign.

Democrats who got news only from outlets with left-leaning audiences were much more inclined to attribute Biden’s actions to anti-corruption efforts (44%) than to a desire to protect his son (13%) – though that 44% is nearly matched by 42% who said they were not sure why Biden called for the prosecutor’s removal.

Other factors beyond media diet may impact people’s views of why Trump and Biden did what they did regarding Ukraine. And someone’s media diet can be selected to fit their existing political views or be a significant factor in shaping those political views. Still, the data shows a clear connection between news diet within party and views on these issues. Past research by the Center has found that even when covering the same events, outlets often emphasize different elements. In a study of coverage about Trump’s first 100 days in office, outlets with right-leaning audiences were more likely to offer positive assessments of the Trump administration’s actions than outlets with audiences that were politically left-leaning or mixed.