Partisanship continues to be the dividing line in the American public’s political attitudes, far surpassing differences by age, race and ethnicity, gender, educational attainment, religious affiliation or other factors. Yet there are substantial divisions within both parties on fundamental political values, views of current issues and the severity of the problems facing the nation. 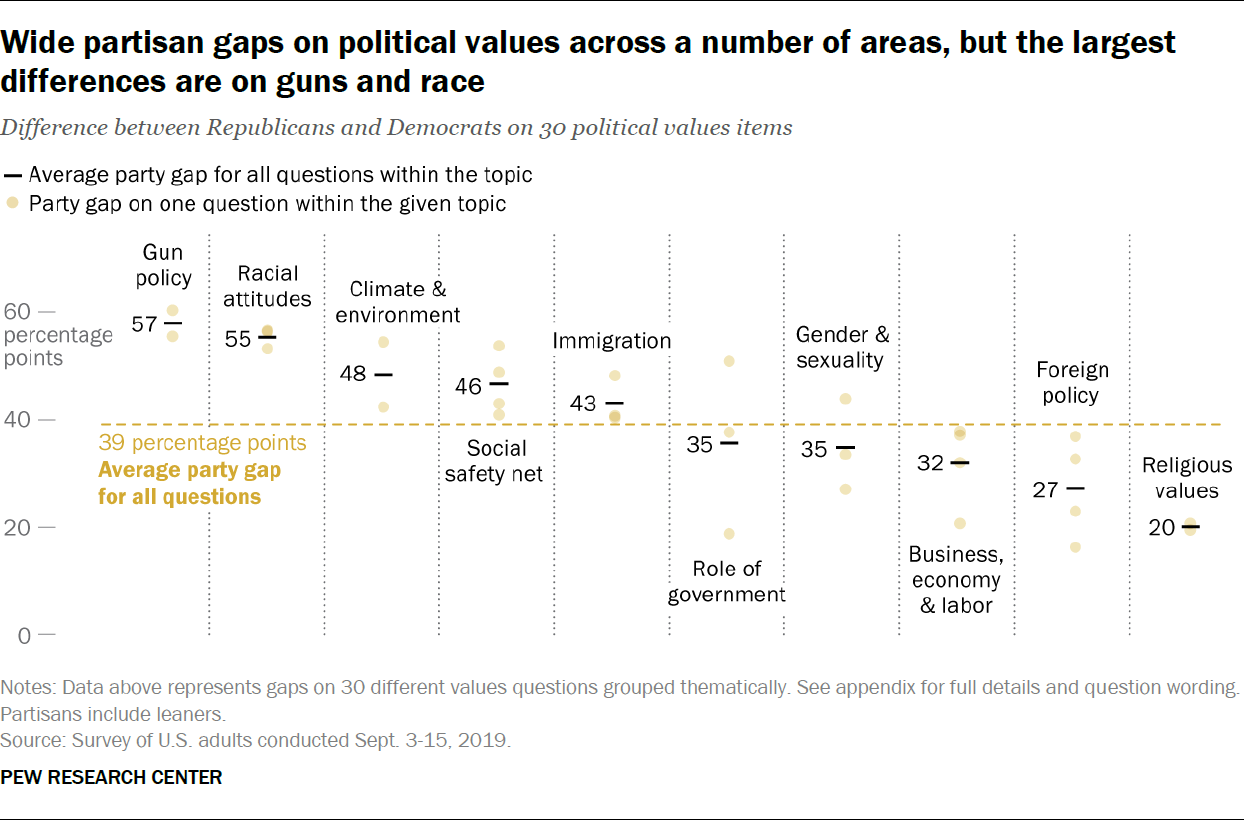 The issues that divide the partisan coalitions are different for Republicans than for Democrats. Age differences are generally wider among Republicans than Democrats – particularly in opinions about foreign policy, immigration and homosexuality – while educational attainment is a bigger divider among Democrats.

Democrats also are divided by race, with black Democrats much more likely than white Democrats to associate belief in God with morality and less likely to say that same-sex marriage has been good for society. Racial differences in attitudes are far less consequential for Republicans, who are predominantly non-Hispanic white.

Ideological differences are evident in both parties. Conservative Republicans, who make up a majority of all Republicans, are nearly 30 percentage points less likely than GOP moderates and liberals to say that legalizing same-sex marriage has been good for society. And among Democrats and Democratic leaners, there are notable differences between liberals (who make up around half of all Democrats) and the party’s conservatives and moderates on religion, same-sex marriage, racial discrimination and foreign policy. 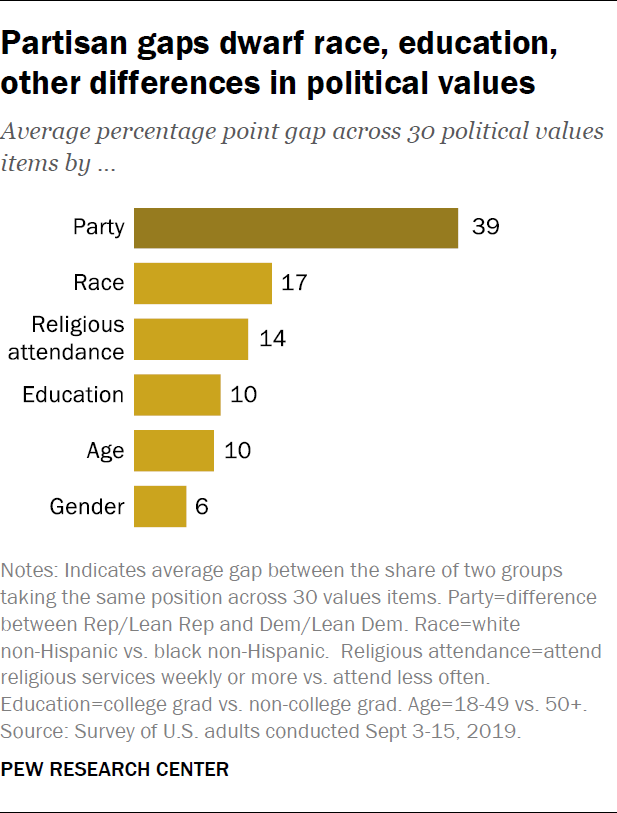 Yet it remains the case that the differences between the two parties are starker than those within the two parties. Across 30 political values – encompassing attitudes about guns, race, immigration, foreign policy and other realms – the average partisan gap is 39 percentage points.

The gaps are substantially wider on some political values, especially those related to guns and race, than others. For two political values on whether guns should be generally more or less available (not specific gun policies), the average difference is 57 percentage points. An overwhelming share of Democrats and Democratic-leaning independents (86%) say the nation’s gun laws should be stricter than they are today; just 31% of Republicans and Republican leaners say the same.

The partisan differences on political values related to race are nearly as wide (55 points). For example, Democrats are seven times as likely as Republicans to say white people benefit “a great deal” from societal advantages that black people do not have (49% vs. 7%).

Across all 30 political values, the differences between Republicans and Democrats dwarf all other differences by demographics or other factors. The 39-point average gap is more than twice the difference between white and nonwhite adults (17 percentage points); people who regularly attend religious services and those who do not (14 points); college graduates and those who have not completed college (10 points); younger and older adults (also 10 points); and men and women (6 points).

The size of the partisan divide on political values has not changed much in recent years. But since 1994, the differences between parties on these measures has more than doubled, while the size of other gaps has been largely unchanged.

The current survey, conducted Sept. 3-15 among 9,895 U.S. adults, is the first time Pew Research Center’s political values survey has been conducted on the online American Trends Panel; previous values surveys have been conducted by telephone. (For more, see “Trends are a cornerstone of public opinion research. How do we maintain them when there’s a shift in survey mode?”)

Across multiple measures, Republicans who are under age 50 have different views from those 50 and older. Age divides among Democrats are much more modest. 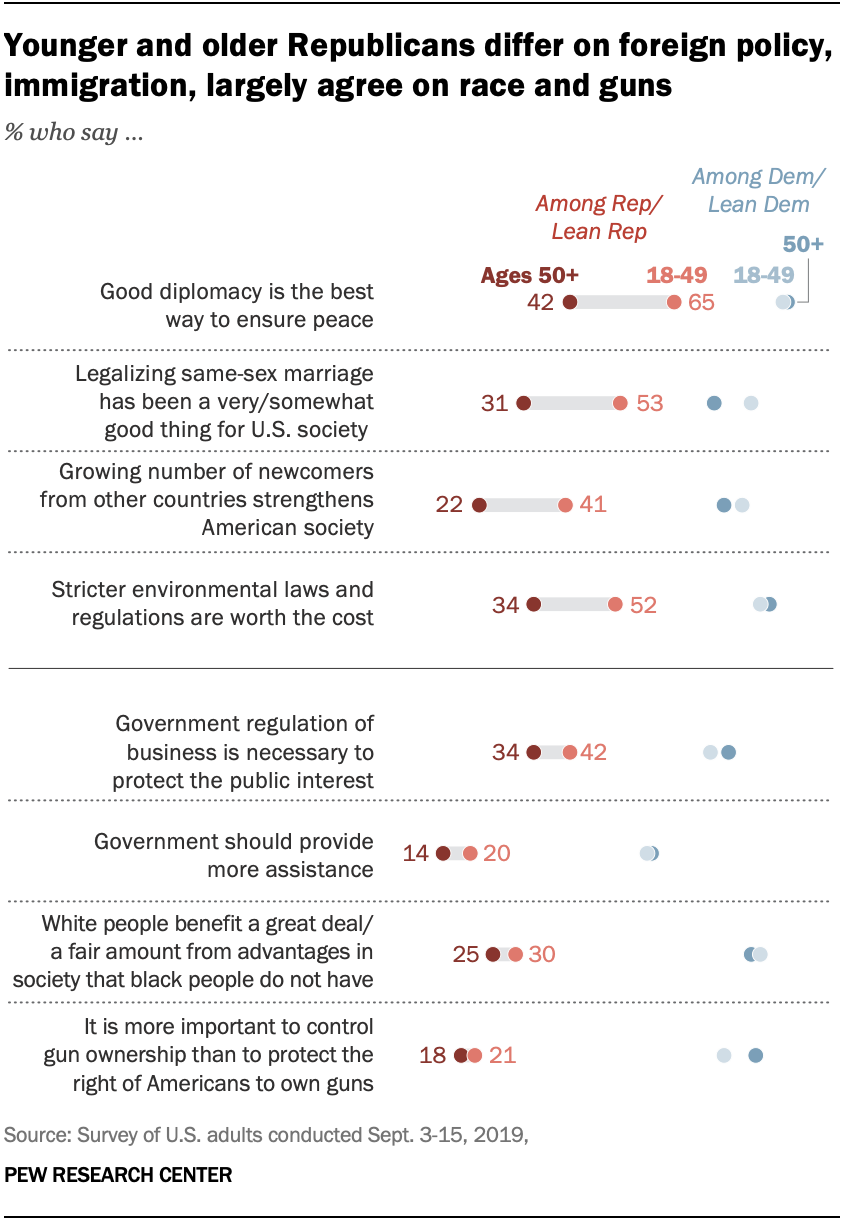 The age differences are about as large in opinions about the impact of newcomers from other countries, whether stricter environmental laws are worth the cost and whether legalizing same-sex marriage has been a good thing for the United States.

The Republicans’ age (and generational) differences extend beyond the items shown here: Younger Republicans are more likely than older Republicans to say that human activity contributes a great deal to climate change and that marijuana use should be legal.

And in some instances, these differences also are seen in perceptions of the major problems facing the country. A substantial majority of Republicans ages 50 and older (80%) say illegal immigration is a “very big problem” facing the U.S.; that compares with only about half (51%) of younger Republicans.

Today, about as many Republicans and Republican leaners are under age 50 (48%) as ages 50 and older (52%). Adults under age 50 make up a majority (54%) of Democrats and Democratic leaners. For Pew Research Center’s most recent analysis of the demographic profiles of the parties and trends in partisan identification among registered voters, released in 2018, see “Wide Gender Gap, Growing Educational Divide in Voters’ Party Identification.” 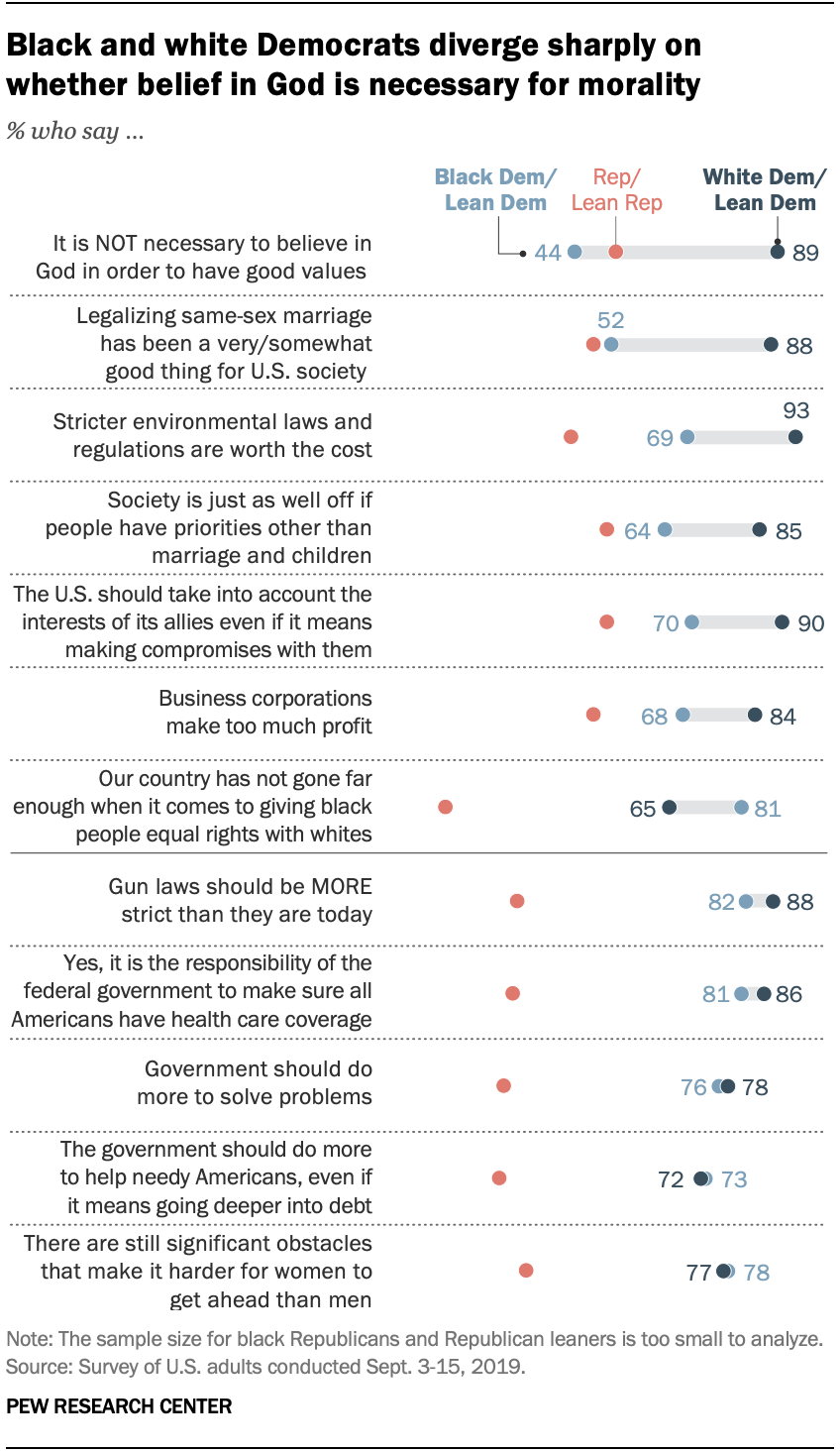 Black Democrats have long been more likely than white Democrats to describe themselves as Christian and to attend religious services more frequently.

These differences are reflected in sharp divides between black and white Democrats and Democratic leaners in opinions related to faith and religion. White Democrats are nearly twice as likely as black Democrats to say that it is not necessary to believe in God in order for a person to be moral (89% vs. 44%).

On this measure, the views of black Democrats are similar to those of Republicans. Among all Republicans and Republican leaners, 53% say belief in God is not necessary for morality, while 46% say it is necessary.

There are significant, though less pronounced, racial differences in Democrats’ attitudes about other issues, including the environment and business profits. And while majorities of black and white Democrats say the country has not gone far enough in giving blacks equal rights with whites, black Democrats are more likely to express this view (81% vs. 65%).

There also are some significant differences between Democrats with four-year college degrees and those with less educational attainment. Most of these differences are evident even when race is held constant. 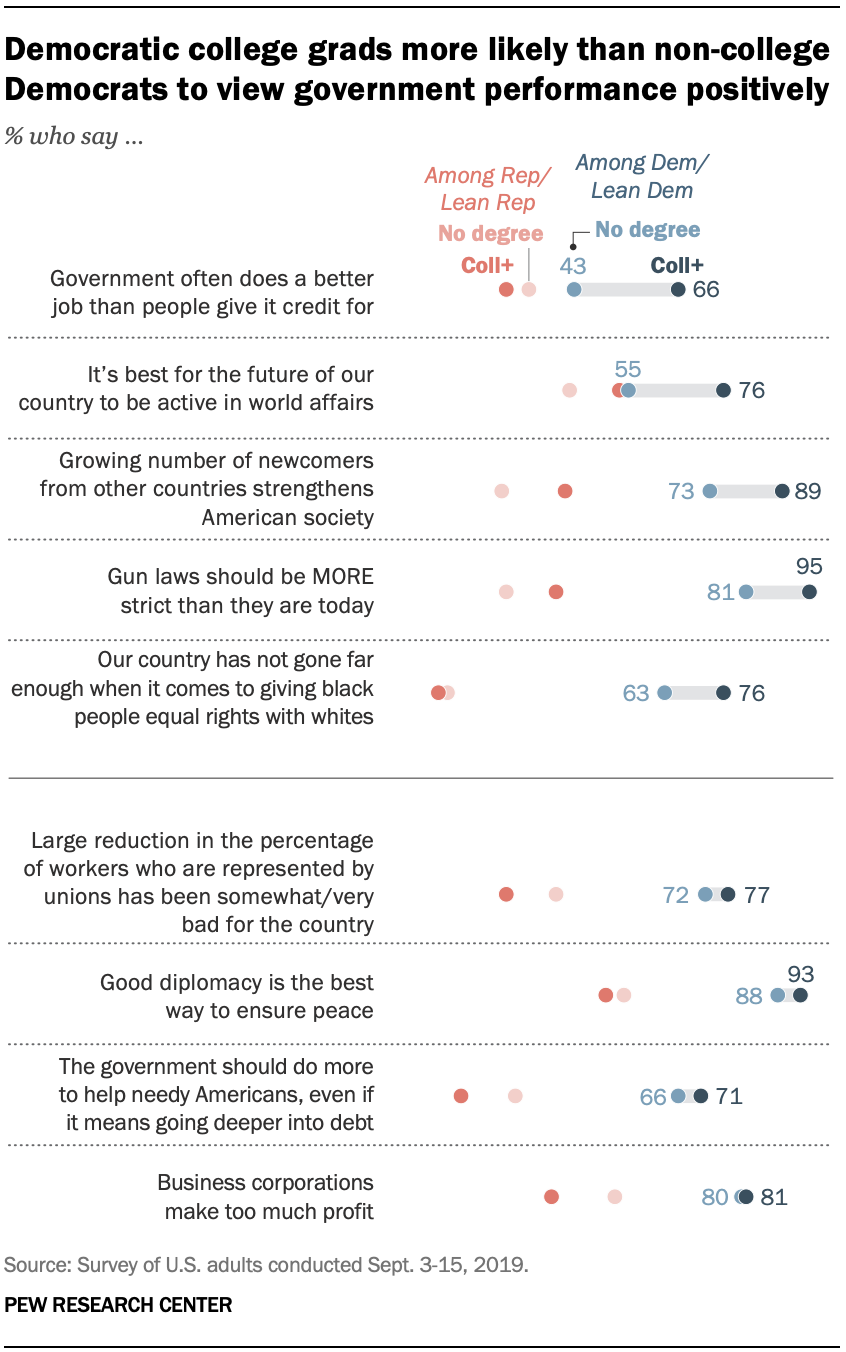 Across the 30 political values items, the differences between college graduates and adults who have not completed college are generally wider among Democrats than among Republicans.

Perhaps the most striking educational gap among Democrats is in assessments of government performance.

Democratic college graduates also are more likely than non-college Democrats to say the U.S. should take an active role in world affairs (by 21 percentage points), that newcomers to the U.S. do more strengthen than burden the country (by 17 points) and that gun laws should be made stricter (by 14 points).

A majority of Democrats and Democratic leaners (63%) do not have a four-year college degree, while 37% are college graduates. That is a sharply different educational profile from 20 years earlier, when college graduates made up only 22% of Democrats. Currently, about a quarter of Republicans and Republican leaners (27%) have four-year college degrees, which is virtually unchanged from 1999 (26%).

Income divides within both parties, but on different issues 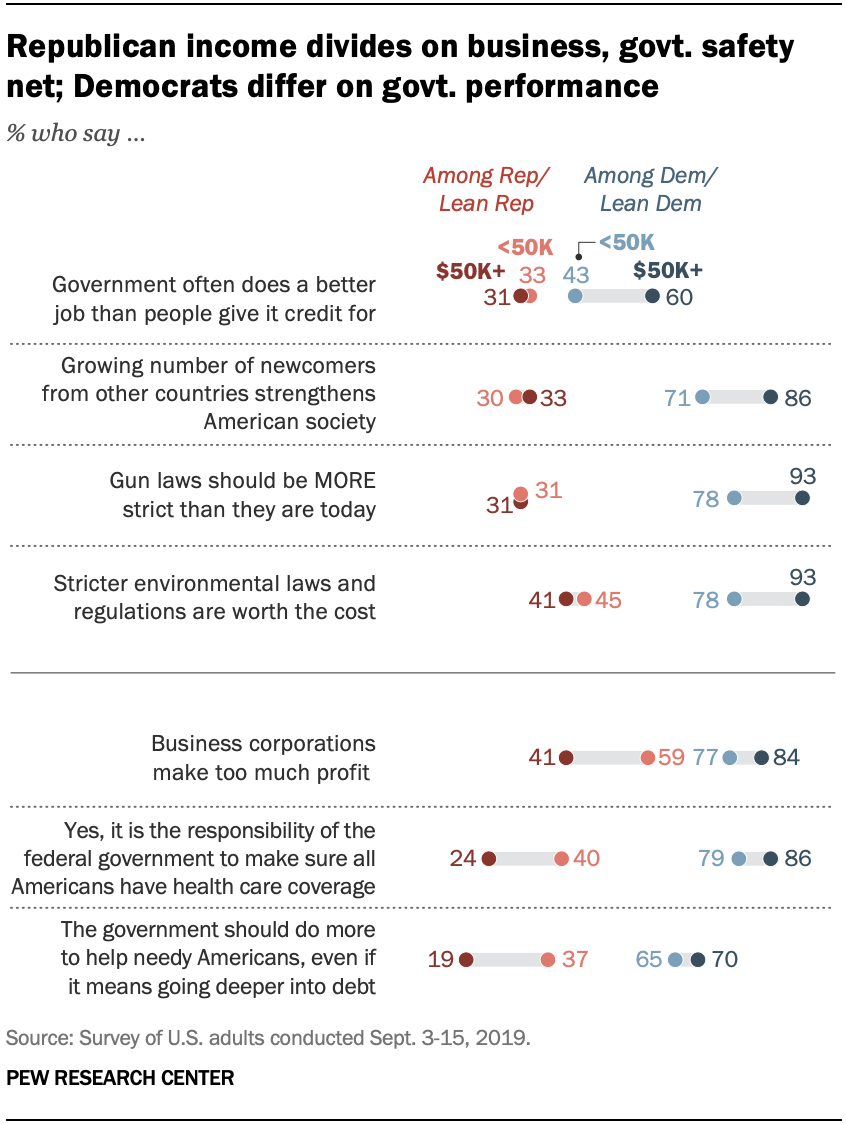 The most striking income difference among Republicans is over corporate profits. A 59% majority of Republicans and Republican leaners with family incomes of less than $50,000 say business corporations make too much profit. Fewer than half of Republicans (41%) with higher incomes ($50,000 or more) say the same.

Lower-income Republicans also are more likely than those with higher family incomes to support more government assistance for needy people and to say the government has a responsibility to provide health coverage to all Americans.

Democrats, regardless of family income, hold similar attitudes about business profits and the government safety net. Yet higher-income Democrats express more positive views of government performance than do those with family incomes less than $50,000. These differences mirror educational differences among Democrats.

Majority of public says U.S. corporations have “too much power.” Nearly three-quarters of Americans (73%) say major corporations in the U.S. have too much power; just 22% say they have the right amount of power, while only 4% say they have too little power. Democrats are more likely than Republicans to view corporate power as excessive; still, majorities in both parties express this view (83% of Democrats and Democratic leaners, 62% of Republicans and Republican leaners).

Growing share of Democrats, but not Republicans, say it’s harder for women to advance. Majorities of Democratic women (83%) and men (69%) say significant obstacles continue to make it harder for women than men to get ahead. The shares of both Democratic women and men who say this have increased by 9 percentage points since 2016. By contrast, half of Republican women and just 18% of Republican men say obstacles still block women’s progress. There has been virtually no change in opinions among Republican women since 2016, while the share of Republican men who say obstacles hinder women’s progress has ticked down (from 23% then to 18% today).

Next: 1. Views of the major problems facing the country
← Prev Page
You are reading page1Page2Page3Page4Page5Page6Page7Page8Page9Page10
Next Page →

In a Politically Polarized Era, Sharp Divides in Both Partisan Coalitions
The GOP’s age gapRacial, educational divisions among DemocratsIncome divides within both parties, but on different issuesOther important findings
1. Views of the major problems facing the country 2. Views of government and the nation 3. Views of the economic system and social safety net 4. Views on race and immigration 5. Gender, family and marriage, same-sex marriage and religion 6. Views of foreign policy 7. Domestic policy: Taxes, environment, health care Methodology Appendix