While long-standing public news organizations are the main source for news for most Western Europeans, newer digital pathways to news are certainly gaining exposure. When asked their top social media site for news, respondents name Facebook the most often, by far. There is also evidence that publics have a tenuous relationship with the outlets they see on social media – as many as a third of adults in Western European countries say they don’t pay attention to the sources they get news from there.

In the social media space, populist views and left-right political divides play only a limited role in people’s news behaviors. While those with populist views tend to express lower levels of trust in specific news outlets and give the news media lower marks for coverage of major issues, those divides don’t translate into social media news habits in all countries. Those who hold populist views are more likely to get news from social media in France, Italy, Spain and Germany, but not in Denmark, the Netherlands, Sweden or the UK. 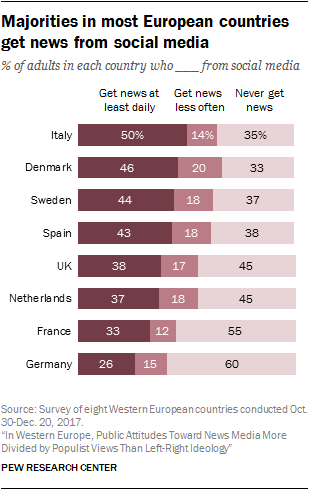 Across countries, social media is used to get news, with Facebook cited as the most widely used site for news

In six of the eight countries surveyed, more than half say they ever get news from social media. And much of this news use occurs on a daily basis, especially in Italy, where half do so at least once a day.

Getting news from social media is least common in France and Germany, where majorities (55% and 60%, respectively) say they do not get any news on social media. 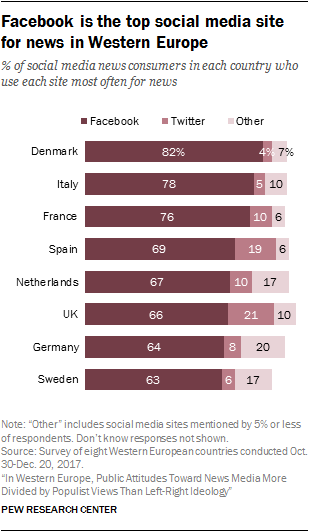 Across all eight countries, Facebook is by far the social media site most used for news. At least six-in-ten social media news consumers in each country cite Facebook as the social network they get news on most often. And indeed, in a separate question asking individuals to volunteer the outlet they use as their main source for news, 5% of adults in Spain and 6% in Italy name Facebook as that source. (See Chapter 2 for more information on main news source.)

Facebook is followed distantly by Twitter, which is cited by between 4% and 21% of adults in these countries as the social media site they use most often for news.

Younger adults are more likely to get news on social media 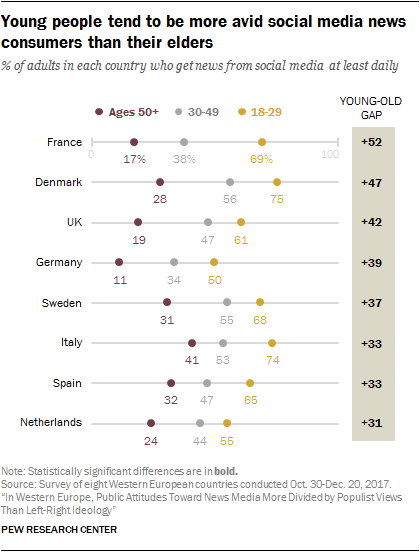 In some countries, as many as a third say they don’t pay attention to sources of news they get from social media 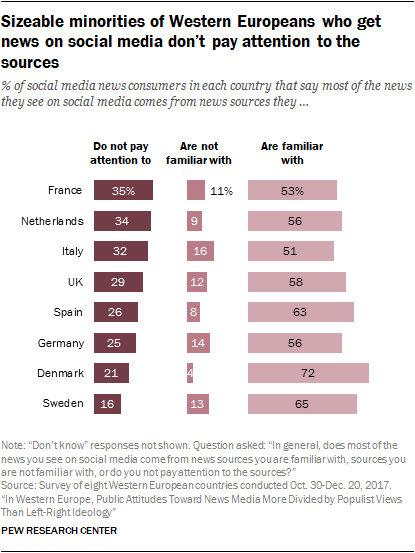 One question often raised about the reliance on social media as a pathway to news is whether people notice the actual source of the news they find there. 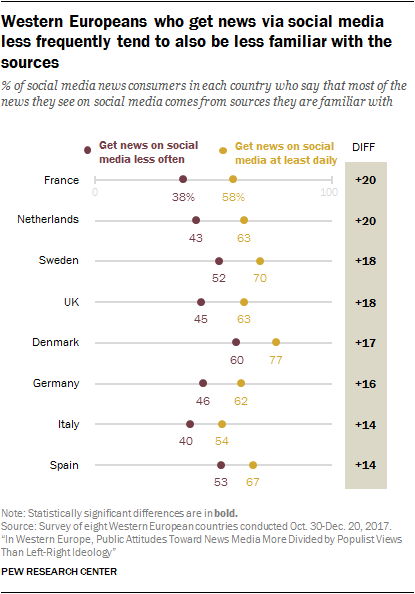 However, across the eight countries, between 16% and 35% of social media news consumers say they do not pay attention to the sources they see on social media at all. Roughly a third of adults say this in France, the Netherlands and Italy, while it is least common in Sweden (16%).

And indeed, more social media news consumers in most countries say they do not pay attention to sources than say the sources are mostly unfamiliar ones. As little as 4% in Denmark to 16% in Italy say that most of the news they see on social media comes from unfamiliar news sources.

This is true in all eight countries, with the largest differences in France and the Netherlands. For instance, 58% of daily social media news consumers in France say they are familiar with the sources they encounter on social media, compared with 38% of less frequent consumers.

In most countries, there is little difference in familiarity with news sources between adults on the left and right, as well as those who with or without populist views.15

The “echo chamber” effect is more common when it comes to personal discussions about the news. In a question posed to all adults in each country (rather than specifically to social media news consumers), about a quarter to a half of adults say the views they hear in personal discussions are often in line with their own. The highest share occurs in Sweden (51%), which also has the second-highest portion of social media consumers who say they mostly see their own views in the news they get on social media (22%). 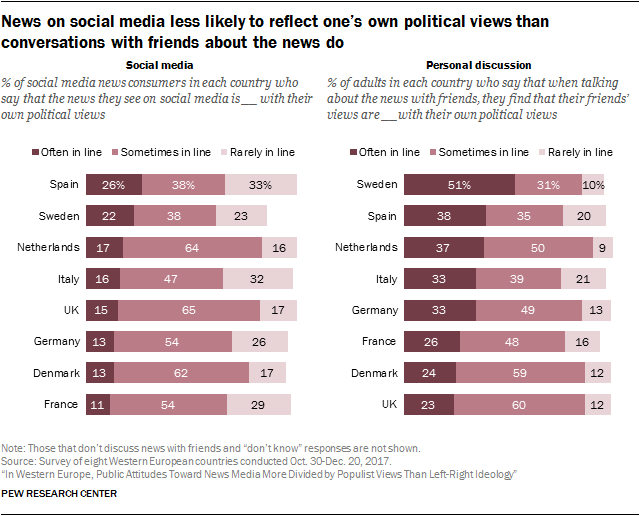 In seven of the eight countries surveyed, these findings on how often people encounter news or discussions that challenge their own political views – whether on social media or in face-to-face conversations – holds true regardless of ideological leanings. That is, in most countries, both left-aligned and right-aligned social media news consumers are about equally likely to say the news they see on social media is often in line with their own views. Among all adults, the same is true for the political views they encounter during personal discussions. 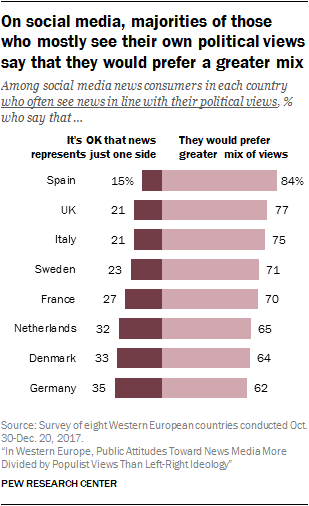 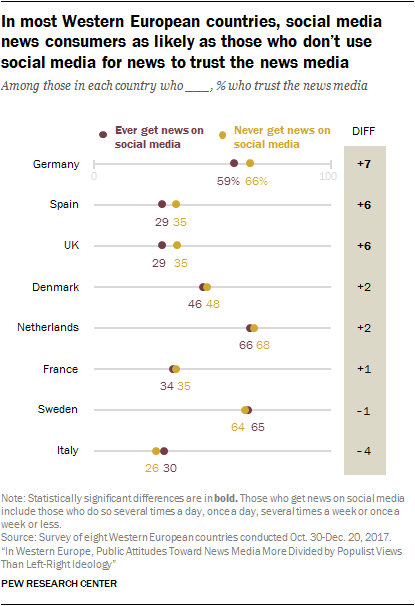 In some countries, those with populist views are more likely to get news from social media 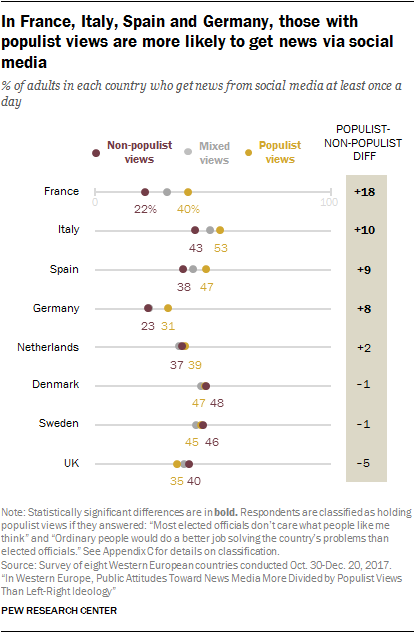 In four of the eight countries surveyed, populists are more likely to use social media for news than those without populist views. The difference is greatest in France where the gap between populists and non-populists reaches 18 percentage points.

In most countries, populist leanings do not relate to whether people are exposed to news on social media in line with their own political views or whether they pay attention to news sources on social media.

In two countries though, the Netherlands and the UK, these populist views play a role. In both countries populists are about half as likely as non-populists to say that they find views on social media that are often in line with their own (12% in the Netherlands, compared with 22% and 10% vs. 21% in the UK).

Next: Acknowledgments
← Prev Page
Page3Page4Page5You are reading page6Page7Page8Page9Page10Page11Page12Page13
Next Page →