While community attachment and local voting show a consistent relationship with local news habits, other types of qualities that one might expect to be associated with these habits show more mixed relationships. How active people are in local groups and political activities, for example, corresponds primarily with their interest in and intake of local news, not their attitudes toward local media organizations. And how highly respondents rate their local communities corresponds primarily with their attitudes about the local news media.

News habits of the civically active

To measure participation at the local level, the study asked about activity in seven different types of civic groups, from sports leagues to church groups to charity organizations, and six political activities respondents may have done in their local areas in the past year, including attending city council meetings, starting or participating in group discussions, or contacting elected officials.3

Overall, roughly a quarter (27%) of respondents report a high level of civic activity, that is, they participate in at least three of these 13 activities. (These findings echo those from our 2015 study of the news environments in three metropolitan areas in the U.S.)

This quarter of the population who is highly active stands out from both the somewhat active (those who have engaged in one or two of the 13 activities or groups) and the inactive (those who engaged in none) for more closely following local news, but not for having more positive attitudes toward local media, suggesting a link between active civic behavior and active news behavior. 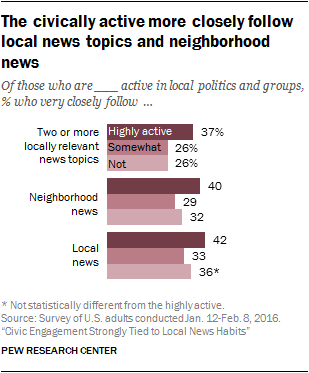 The relationship is mixed for following local news. While the highly active are more likely to do so than the somewhat active (42% vs. 33%), they are not more likely than the inactive (36%).

The highly active also report higher levels of local news intake. When it comes to specific sources, they are more likely than those who are less active to get community news on three or more source types, with nearly four-in-ten (38%) of the highly active doing so, compared with a quarter of both the somewhat active and the inactive. 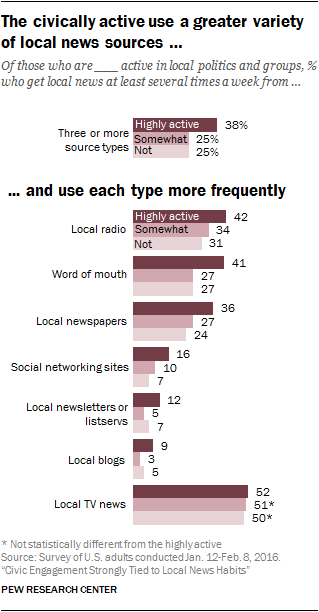 The highly active are also more than twice as likely to have spoken to local journalists (40%) than the inactive (16%), while roughly a quarter of the somewhat active have done so (23%).

News habits of those highly satisfied with their communities

Just as taking part in local political and civic groups is closely associated with greater interest in and intake of local news, positive civic attitudes closely connect with positive attitudes about local news. 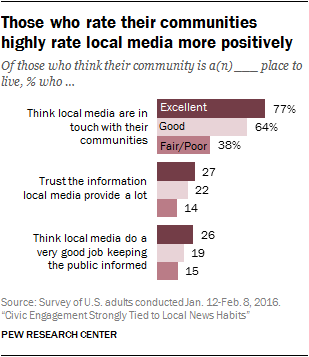 Those with the most positive view of their communities are also more likely to trust the information provided by local news organizations (27%, compared with 22% of moderate raters and 14% of poor raters) and to believe local news organizations do a good job (26%, compared with 19% of those who rate their communities moderately and 15% of those who rate them poorly).

Similarly, while high raters are slightly more likely than others to show interest in local and neighborhood news, it is a considerably smaller gap than for the other civic qualities studied in this report. About four-in-ten high raters follow local news very closely (42%), which is higher than among moderate raters (34%) but not poor raters (35%).

When it comes to the locally relevant news topics people follow, a similar pattern emerges. High raters (35%) are more likely than moderate (27%) or low raters (24%) to closely follow at least two items, but again, the gap between these groups is smaller than when other civic qualities are measured, such as community attachment or local voting.