News habits of the highly attached

Only a minority of U.S. adults – about one-in-five (19%) – feel highly attached to their communities, while 47% feel somewhat attached and 33% feel little or no sense of attachment. But these highly attached individuals represent a core slice of those who give a lot of attention to local news.

At the broadest level, their overall interest in news stands out. Roughly six-in-ten (59%) of the highly attached follow local news very closely, roughly twice that of the unattached (27%) and more than the somewhat attached (34%).1 A similar gap emerges in the level of interest in neighborhood news.

These highly attached community members also tend to get local news across a wider array of news platforms. Fully 44% of the highly attached regularly use at least three of the seven types of sources asked about, from local newspapers to local radio to local blogs, outpacing the 30% of the somewhat attached and 17% of the unattached who do so. This greater tendency for news consumption often reflects a heavier reliance on individual sources: They are nearly three times as likely as the unattached (45% compared with 17%) to get community news from their local newspapers at least several times a week. And about six-in-ten (63%) regularly get news from local TV, more than the 53% of the somewhat attached and 40% of the unattached. One exception here is social networking sites, where equally low shares of the highly attached, somewhat attached and the unattached regularly get local news – a trend that carries through to most other aspects of civic life discussed in this report as well. 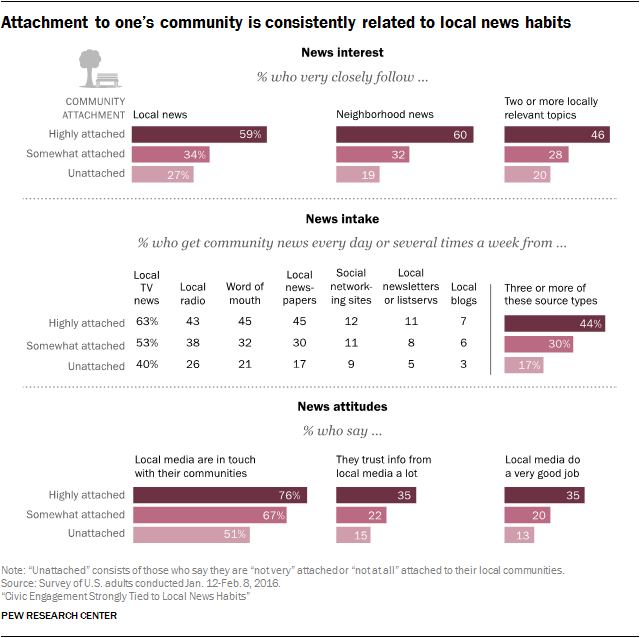 Another segment of the public to demonstrate a consistently stronger connection to local news is registered voters who say they always vote in local elections.

This group (consisting of 27% of U.S. adults) is much more likely to follow both local and neighborhood news than those who do not always vote in local elections.2 Roughly half of these regular local voters (52%) follow local news very closely, while just three-in-ten who don’t always vote in local elections do so. They are also more likely to follow at least two of the five locally relevant news topics asked about.

People who always vote in local elections are also more likely than those who don’t to use multiple source types for local news. Nearly four-in-ten regular voters (38%) turn to at least three source types several times a week, compared with 24% who don’t always vote locally. Regular voters’ pathway of choice is local TV, which is used several times a week or more by 63% of this group. Getting local news through social media, local newsletters or local blogs are the three source types where there is no difference between regular local voters and those who do not always vote locally. Regular local voters are also more likely to have spoken with or been interviewed by local journalists (35% vs. 22%).

When it comes to attitudes, regular local voters are more likely than those who don’t always vote locally to view the local media as trustworthy, to feel they do a good job and to think they’re in touch with their local communities. 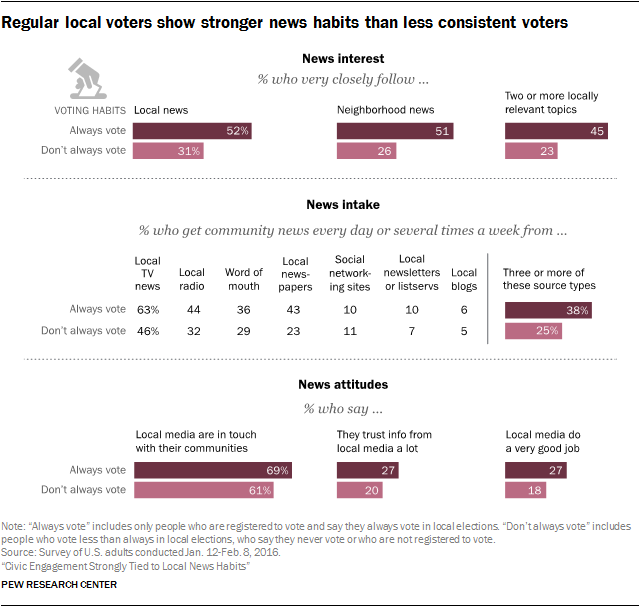 The study also examined this connection between voting and local news habits based on respondents’ observed voting history, using data taken from public records (the “voter file”) to construct a measure of how regularly they actually show up to the polls. However, survey responses were deemed more robust for a variety of reasons (which are discussed in Appendix A). Most prominently, these records provide reliable data about voting in federal elections but not local elections. Given the local focus of this study, self-reported data was the best available option when it came to voting behavior.

Another sign of how connected one is to their local community is the extent to which a person knows their neighbors. About a quarter of U.S. adults (23%) report knowing all their neighbors’ names. This group is distinct from the highly attached – about four-in-ten overlap (41% of those who know all their neighbors are also highly attached to their communities). But these neighborly residents also stand out from their counterparts for having stronger local news habits across all three types of measures: interest, intake and attitudes. However, this trait often shows less strong relationships with local news habits than community attachment does, though it largely shows similarly strong relationships with local news habits as does regular local voting.