A consistent finding across these metro areas is that individuals with strong engagement in local civic and community life as well as those who give their city a high rating as a place to live display stronger local news habits. 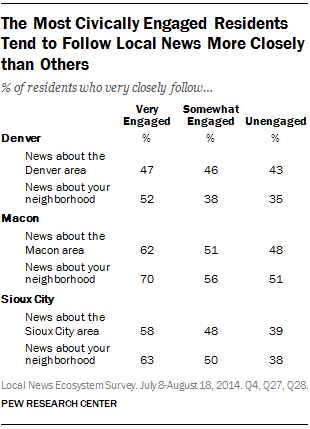 In each of the three diverse cities studied, the most engaged residents are more likely to follow and discuss local news, take part in a number of different news activities, and are somewhat more digital in their local news than residents who are less engaged. They also differ in the news sources they choose to use.

To measure local engagement, residents were asked if they are members of various local groups and organizations, such as community, parent or church groups, and if they have taken part in certain activities in the past year, such as attending public hearings or neighborhood meetings. Overall, roughly a quarter of residents in each city (24% Denver, 26% Macon, 22% Sioux City) are members of or have taken part in four or more of the 15 groups and activities asked about. For this report, those individuals are termed the “very engaged.” About the same share (28% Denver, 27% Macon, 30% Sioux City) have not taken part of in any of the groups or activities—termed “the unengaged.”

With only one exception, the most civically engaged in each city are more likely to closely follow local and microlocal news than are those who are less engaged. (The one exception is news about the Denver area.) 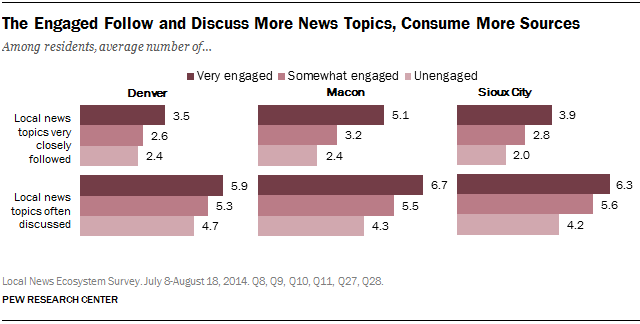 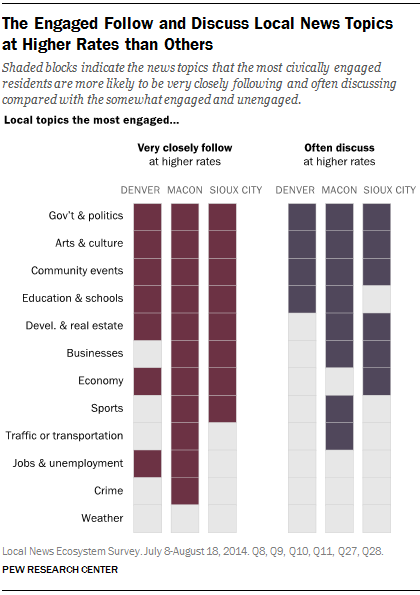 In Macon, the very engaged follow 11 of the 12 topics asked about at higher rates; the same is true of eight of the topics in Sioux City, and seven in Denver. For example, across all three cities, local government, arts and culture, and schools and education are closely followed at higher rates by the most engaged.

The same trend holds true when it comes to talking about news topics with other residents. The very engaged in Macon often discussed eight of the 12 topics at greater rates—from local government and politics to local development and real estate to local sports—than the somewhat and unengaged, six in Sioux City, and four in Denver.

In addition to following local news more closely, the engaged are more likely to take part in a number of different news activities, including both the high and low tech. In fact, more than half of the very engaged in each city have shared a story digitally in the past year. And while the numbers overall are lower for calling in to a live radio or TV program or submitting letters to the editor, the very engaged are about twice as likely or more to do so than those less engaged. 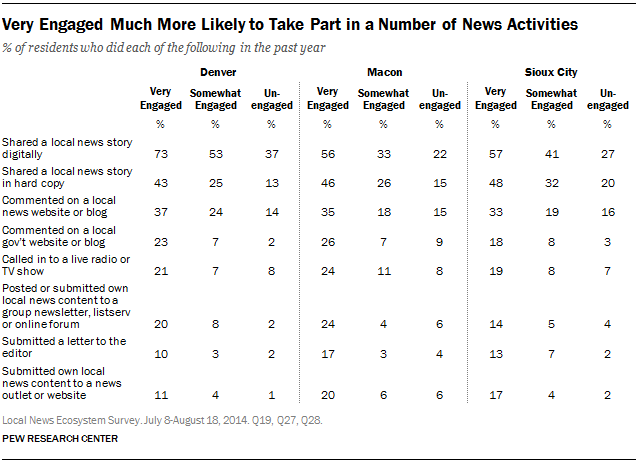 TV for All, Newspapers and Personal Conversations for the Engaged

Across all levels of engagements and in all three cities, local TV is the top source of local news. In both Macon and Sioux City, about two-thirds of residents in each engagement group often get local TV news. In Denver, at least half of each group often uses local TV as a source for local news.

Other types of sources that are less frequented overall also stand out among the engaged. In all three cities, the most engaged are more likely to often turn to neighborhood associations or listservs. The same is largely true for local newspapers or magazines beyond the main daily. And, in Macon and Sioux City, while still at relatively low rates, more of the very engaged often use local government agencies and officials as local news sources. Reliance on radio news is a bit more muddied. Engaged residents in Sioux City are more likely to rely on it often than are other residents, but the trend is not as consistent in Denver or Macon. 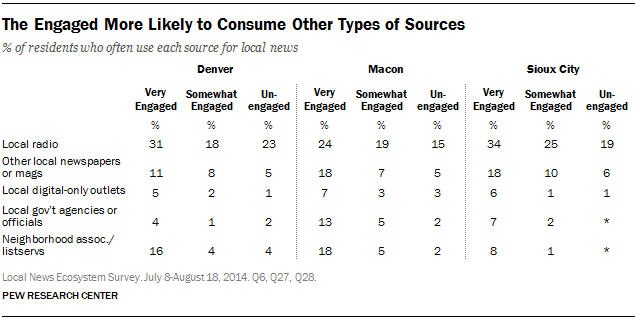 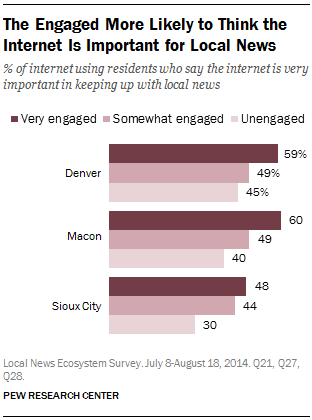 The very engaged are also somewhat more digitally focused in their local news media habits. In Denver and Macon, very engaged residents who use the internet are more likely to consider it an important platform for local news than the somewhat and unengaged, and more so than the unengaged in Sioux City.

The Grumpy Engaged in Denver 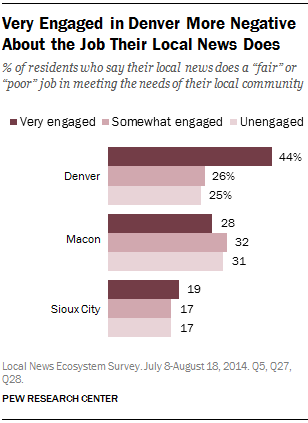 Further, about a quarter (24%) of very engaged Denver residents who have lived there at least five years say that the quality of local news coverage has declined in the past year, compared with 13% of the somewhat engaged and just 6% of the unengaged.

In Macon and Sioux City, there is little difference in their evaluation of the job that the media are doing and whether the quality of local news coverage has gotten better or worse. 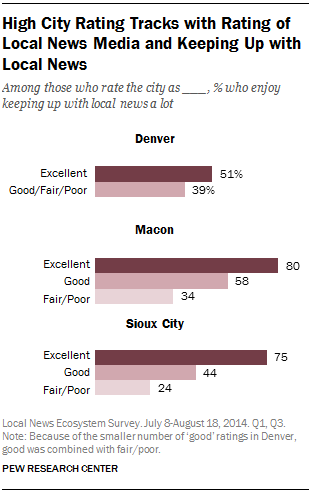 In Sioux City, and to a somewhat lesser degree in Denver and Macon, high ratings of the city as a place to live also connect closely with news habits.

In Macon and Sioux City, Those Who Give City Highest Marks Follow and Discuss More News Topics

Looking at the specific topics, Sioux City residents who rate the city as an excellent place to live very closely follow nine of the 12 topics at higher rates than those who rate the city as good or fair/poor. The same is true for often discussing seven of the topics. Some of the topics that stand out as having large differences between the most satisfied and those less satisfied include the local economy, local schools and education, and local government and politics. In Macon, those who rate the city as excellent are more likely than others to very closely follow eight of the 12 topics but to discuss only one of the topics at higher rates.

In Sioux City, this pattern of greater news consumption among those who give their city the highest rating holds true for local TV, local radio, other local newspapers and magazines, local government agencies or officials, neighborhood associations or listservs, and other local residents. In other words, even if the mix of available outlets is not as great Sioux City as Denver, the residents there who give their city an excellent rating take fuller advantage of what’s there.

Next: Facebook and Twitter—New but Limited Parts of the Local News System
← Prev Page
Page3Page4Page5Page6Page7You are reading page8Page9Page10Page11Page12Page13
Next Page →