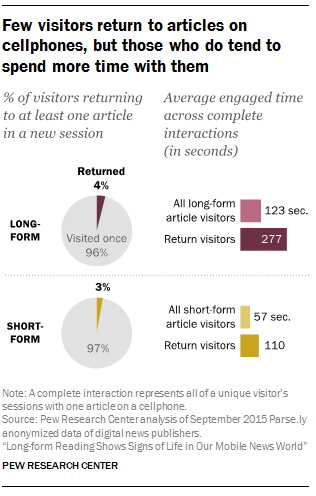 Another question that arises in mobile digital news consumption is how often users return to an article – whether to finish reading it, re-read a portion, share it with a friend or for some other reason. This is again especially pertinent for long-form news, which requires more time to complete.

Due to the way users are tracked, these metrics are only able to track return visits to articles on the same device as the initial visits – in this case, the same cellphone. Even with this limitation, though, the data do help shed light on how often it occurs and what difference it tends to make in the total engaged time. 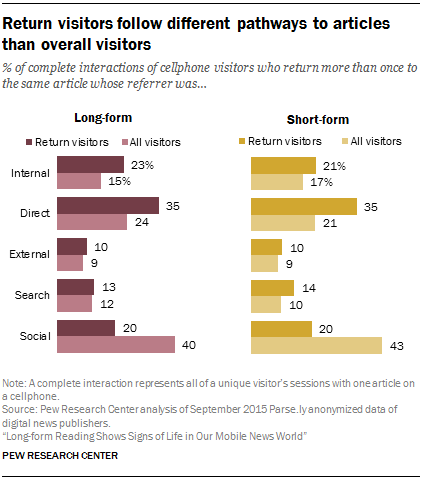 The vast majority of these returns occurred on the same day as the interaction’s first visit: about eight-in-ten long-form and short-form returners (81% of each) came back to an article the same day they first visited it. Another 8% of each returned on the second day and 3% on the third day.

One stark difference between returners and overall visitors on cellphones is in the way these different groups of users first land upon an article.

Among both short and long-form return cellphone visitors, the greatest percentage of complete interactions from article returners, 35% each, begin with a user who come through a direct referral. About a quarter (23%) of complete interactions came from return long-form readers who arrived at an article through a link from elsewhere on that site (21% for short-form returners), while another 20% for both types arrived from a social networking site.

This is a very different distribution than the complete interactions by visitors overall, who, as discussed earlier in the report, most commonly arrive at both short- and long-form news stories by following a link on a social networking site (roughly four-in-ten of each). And users overall are less likely to arrive at an article directly. This suggests that while social drives much of the overall traffic, these users are less likely to keep an article in mind and develop a recurring interest in it. This may help explain why the average time spent with short-form articles for social media users is lower than for any other pathway, – social networks drive traffic, but don’t necessarily tap into deep-seated interests.

Next: 6. Most interactions begin within one week of publication
← Prev Page
Page3Page4Page5You are reading page6Page7Page8Page9Page10Page11Page12Page13
Next Page →

Long-Form Reading Shows Signs of Life in Our Mobile News World 1. Digital readership data and what it can tell us 2. Analysis suggests some readers’ willingness to dig into long-form news on cellphones 3. Users spend more time with content in the morning or late at night 4. Cellphone news users spend the most time reading long-form content when arriving at an article from an internal link, least time when arriving via a social network
5. On cellphones, return visitors spend more time with articles than visitors overall
6. Most interactions begin within one week of publication 7. Few cellphone readers of long- or short-form articles visit multiple articles on a site 8. Engaged time with long-form news varies by topic Acknowledgments Methodology Appendix A: Detailed Tables Appendix B: Terminology