When they hear about news events from friends and family, the vast majority of people seek out full news stories to learn more, according to a new survey by the Pew Research Center.

People most often receive news from friends and relatives the old-fashioned way: word of mouth. But significant percentages of people now get most of this news through email and social networks, and they follow up even more often than those who receive news in conversation.

According to the 2013 survey of more than 2,000 U.S. adults, nearly three-quarters—72%—say the most common way they hear about news events from family and friends is by talking in person or over the phone. But 15% get most news from family and friends through social media sites. And that rises to nearly a quarter among 18-25 year olds. Seven percent do so via email. 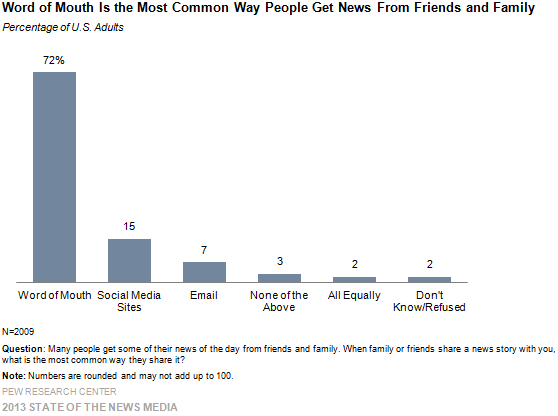 Even more striking is the proportion of people who then go an extra step to get more information. Nearly two-thirds of those who get news from family and friends chiefly through conversation “often” or “very often” seek out a news story to learn more. The 22% of respondents who primarily receive news from family and friends electronically seek out news stories at an even higher rate. Fully 77% said they followed up at least somewhat often, more than three times the 23% who rarely or never followed up.

Those electronic shares, then, may be a good way for news outlets to expand their audience. 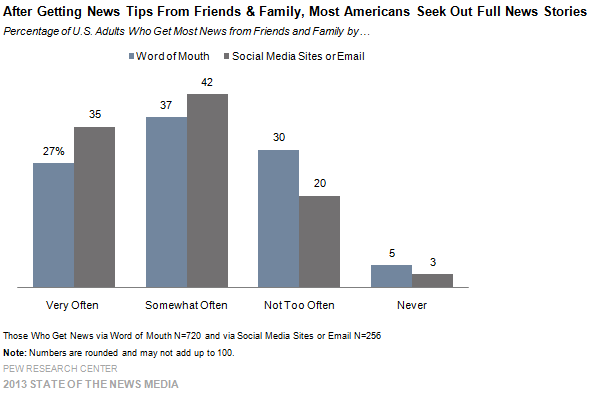 The gap between acting on a digital news tip or a conversational one makes sense: It is easier and faster to click on a link that is literally at your fingertips than it is to find a story in a newspaper, which you may or may not have at your disposal, wait for a story to air on television or the radio or even conduct a search and weed through options on the internet.

What’s more, the practice of sharing news electronically may well increase in coming years as digital and mobile platforms continue to reach broader segments of the population.

College graduates and those with higher household incomes are more likely to get most of their news from friends and family electronically, though with more of a mix between social networks and email. Fully a third of college graduates gets most of the friend and family news this way (19% through social media and 14% via email), as do 31% of those earning more than $75,000 per year (18% through social media and 13% via email). Only 16% of people who didn’t attend college at all received news from relatives or friends electronically, primarily through social media.

Democrats and independents were slightly more reliant on social networking than their Republican counterparts, receiving news from family and friends through social media 17% of the time, compared to 12% for members of the GOP. 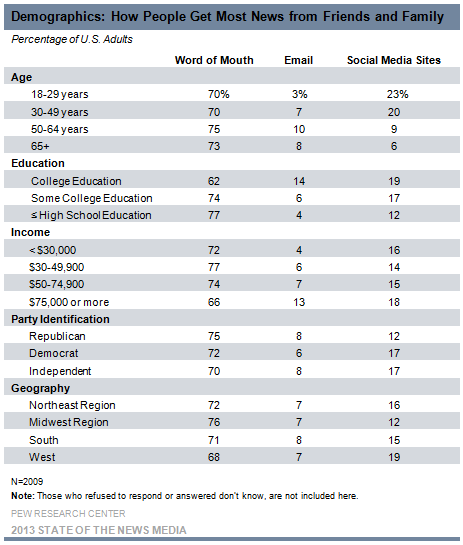 The people most likely to search out more about a story they came upon in emails or through social networking were those who earned $50,000 to just under $75,000 a year. Nine out of 10 of them said they followed up somewhat or very often. But even people who earned less than $30,000 a year – who followed up less than those in all other income categories – did so at 69%.

Again, women followed up on electronic news more than men. Forty-one percent of women said they clicked on a link or sought out more information “very often,” compared to 29% of men. Both men and women said they followed up “somewhat often” at the rate of 42%.

People who live in the West – home of the Silicon Valley—followed up on electronic news more than people in other regions. More than half (55%) of Westerners sought out additional information “very often,” more than three times as often as Midwesterners, who did so 17% of the time. 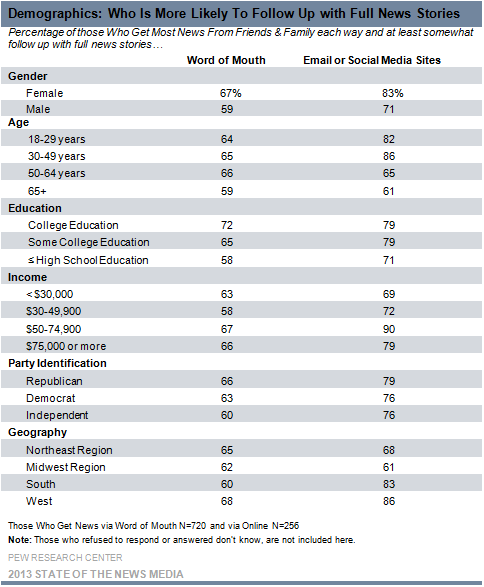 The survey results could be heartening to news outlets. They show, first and foremost, that most people are interested in the news they receive from family and friends, and curious enough about it to seek out more details. Further they demonstrate that the growth of electronic communication—via email and, to an even greater extent, social networking – may make it easier and more likely for people to follow up on news in the future.

The PSRAI January Week 4 and February Week 1 2013 Omnibus Polls obtained telephone interviews with a nationally representative sample of 2,009 adults living in the continental United States. Telephone interviews were conducted by landline (1,003) and cell phone (1,006, including 512 without a landline phone). The surveys were conducted by Princeton Survey Research Associates International (PSRAI). Interviews were done in English by Princeton Data Source from January 24 to 27 and February 7 to 10, 2013. Statistical results are weighted to correct known demographic discrepancies. The margin of sampling error for the complete set of weighted data is ± 2.5 percentage points.