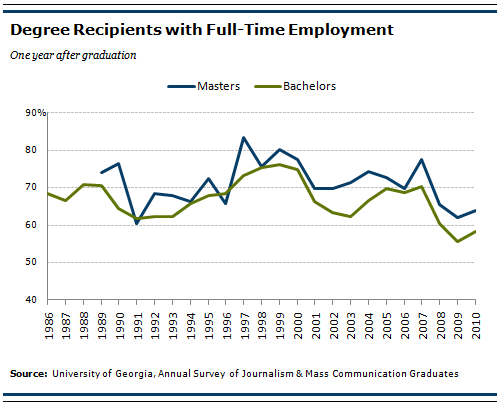 alism and mass communication degree recipients graduating in 2010 entered a slightly better job market than those graduating one year earlier. But considering that 2010 followed the worst two years on record for grads, that is little cause for celebration.

The report shows a 2.7% rise in employment from 2009, when 55.5% reported having a full–time job one year after graduation. And 2009 was the worst year in 25 year history of the survey and the first time the rates dropped below 60%. Lee Becker, the report’s co-author and the director of the Cox Center for International Mass Communication Training and Research at the University of Georgia, didn’t find much good news in the small jump in numbers.

“Any improvement underway is slight,” he said. “Students are in a very challenging market. It is hard to be optimistic.” Indeed, as recently as 2008, 70.2% of degree recipients reported finding a job within one year.

Another ominous finding is the disproportionate impact of a rough job market on racial and ethnic minorities. When the survey excluded those students who opted to return to school rather than enter the job market, only half of the 2010 minority graduates with undergrad degrees, 49.9%, found full-time jobs compared to 67% of non-minority graduates. That gap of 17.1% is the largest in the 25 years the University of Georgia has been monitoring this. 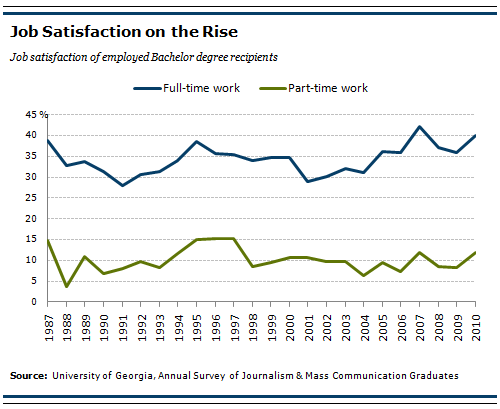 There were, however, some positive notes among the generally sobering results. For one thing, more of the graduates who were able to find employment seemed to be enjoying the workplace.

The findings also reveal that a healthy majority of communication grades are working with the web and technology. Nearly two-thirds—63.6%—are writing and editing for the web, up from 58.2% last year and the highest reported number yet. And 23.6% are building or designing web pages, a small increase from 2009.
“Learn digital!” a female graduate working at an advertising agency advised future students. “Digital is the future of this business.”

One downside of the communications job market is the continuing stagnation of salaries. The median annual wage for full-time employed 2010 bachelor degree recipients was just $30,000—a number that has not changed in five years. And master degree recipients fared even worse. They saw a drop in salaries—from $39,000 in 2009 graduates to $36,200 in 2010.

Becker adds that “stagnation in salaries is not good news [and] coupled with no evidence of benefits packages improving, the trend isn’t positive.” Just over half of respondents (55.8%) report that their employers provide help with medical insurance and less than half said they receive assistance with dental (49.3%), disability (39.5%), life insurance (42.5%), or retirement (45.2%).

Many websites “hire one full-time employee that basically works 24/7—they compensate them well.” Becker observes. But much of the site’s content is “produced by many freelance journalists working at very low level pay. That’s the new model.”

The survey also indicates that the job market varies depending on a graduate’s field of interest.

For example, 2010 bachelor degree recipients specializing in advertising were quite successful in finding employment, with 71.9% finding full-time employment, the highest number in five years. And 62.8% of graduates specializing in public relations found a job, although that was down slightly from 2009.

But students specializing in news-editorial—or traditional print journalism—fell to just 50.5%, a historical low and more than a 20 percentage point drop from 2007, when employment rates were 71.7%.

Students specializing in telecommunication saw a small jump in numbers from 2009, but just over half, 52.4%, were able to find jobs after graduating. 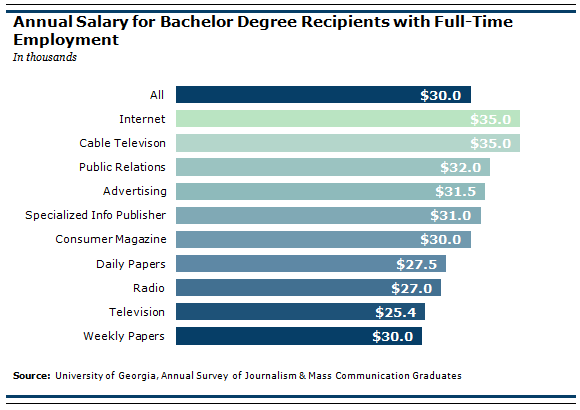 One message coming out of the survey is that in this difficult environment, work in the communications field is something of a labor of love. As one female graduate put it: “Follow what you genuinely enjoy doing—not the name, not even the salary—but the work itself. This is something that is going to take up the majority of your time.”