Although the scandal enveloping Rupert Murdoch’s media empire has focused on his British properties, it has also put News Corp’s. U.S. outlets under a brighter spotlight—particularly the prestigious Wall Street Journal he acquired by purchasing Dow Jones for $5 billion in 2007.

The Journal made its own news this past week with a strongly worded July 18 editorial defending the company and lashing out at the “commercial and ideological motives of our competitor-critics.” That produced a chorus of criticism and some questions about Murdoch’s stewardship of the paper.
One way of examining the Murdoch era at the Journal is to see whether its news agenda, as expressed on the front pages, has changed in the nearly four years since he bought it and if so, how. A PEJ examination of the paper’s page 1 coverage from 2007 through June 2011 finds some clear shifts in direction. The study looked at front-page coverage of the Journal and by way of comparison, the New York Times from 2007-2011.

Under the Australian-born media magnate, coverage has clearly moved away from what had been the paper’s core mission under previous ownership—covering business and corporate America. In the past three and a half years, front-page coverage of business is down about one-third from what it had been in 2007, the last year of the old ownership regime.

That, to some degree, reflects the Journal’s move toward a more general interest publication. And some categories of news, such as coverage of government, foreign news involving the U.S. and lifestyle subjects, have increased noticeably in recent years. Yet attention to other subject areas has fallen. Front-page coverage of health and medicine has been de-emphasized the past few years. Education issues have virtually disappeared from the front pages as has—ironically enough, given the current state of affairs—attention to the media industry. 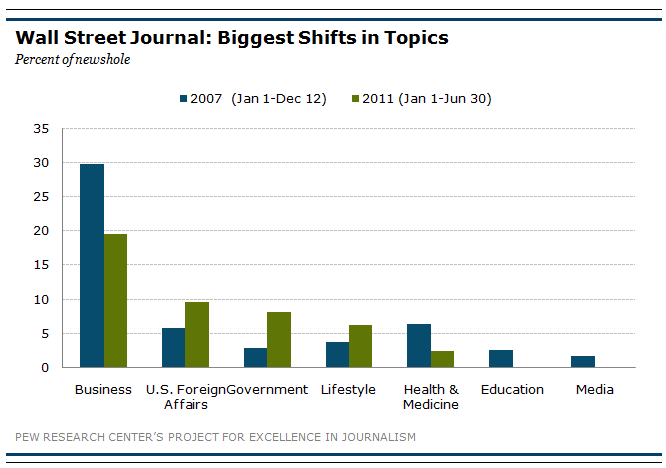 When Murdoch bought the Journal, he also made clear his desire to reshape the paper to more directly challenge the New York Times, even reportedly sending Times publisher Arthur Sulzberger Jr. a letter declaring: “Let the battle begin.” And when it comes to the news agenda, some differences between the two publications have narrowed noticeably, as a result of what the Journal has both chosen to emphasize and de-emphasize under News Corp. But their front pages are still not the same in topic agenda.

The Journal in the Murdoch Era

The Journal is also somewhat more international. Since 2010, there has also been more coverage of international events that directly affect the United States. That accounted for 6% of the newshole in 2007 and then was halved to 3% in the first year of News Corp. ownership. But in the past two years, it has moved up to 9% and 10% respectively. Coverage of global events that do not directly impact the U.S. has remained relatively stable, with the exception of the first half of this year, which was marked by such major events as the Mideast unrest and the Japanese earthquake that generated extensive coverage in the mainstream media. 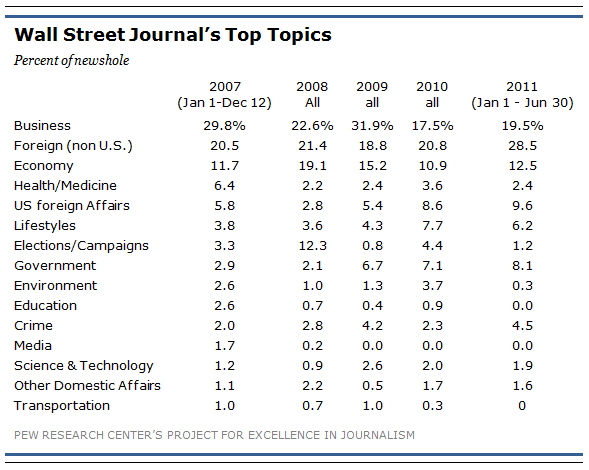 In the past two years, there has been a somewhat stronger emphasis in the Journal on lifestyle issues, which accounted for 4% of the newshole in 2007, but doubled to 8% in 2010 and has registered at 6% in 2011.

At the same time various other topics have generated notably less attention in the News Corp. era, including health and medical issues (at 6% in 2007 but only 2% in three of the four years since), education (3% of the front-page newshole in 2007 but less than 1% since), and media-related coverage (2% in 2007 and virtually disappeared since then).

Murdoch’s Journal vs. the NY Times

Perhaps the biggest narrowing of the gap between Murdoch’s Wall Street Journal and the New York Times has come in the areas of business and economics. In the case of business, the Journal’s coverage has dropped markedly while the Times’ has essentially remained stable. In the area of economics, the Journal’s coverage has remained fairly stable while the Times’ has increased.

Another coverage area that has become more competitive in the News Corp. era is overseas news directly involving the U.S. In 2007, the Times held nearly a 3-1 edge, 17% to 6%. That gap has closed dramatically in recent years and in 2011, it is very modest, with the Times devoting 11% of its front-page coverage to the subject and the Journal right behind at 10%. 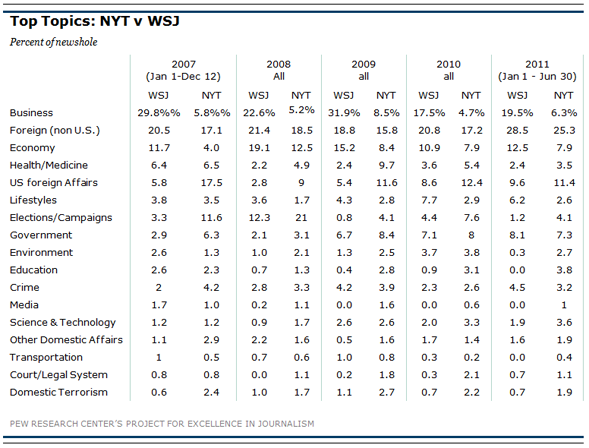 The same holds true for coverage of the U.S. government. Before Murdoch acquired the paper, the Journal devoted half as much attention to the topic as the Times (3% to 6%). That margin has continued to shrink until this year, when the Journal actually pulled ahead—8% to 7%.

On the other hand, the Journal’s increasing focus on lifestyle has now eclipsed the Times coverage of the topic. In 2007, both papers devoted between 3% and 4% of their coverage to lifestyle. In 2011, that number has risen to 6% in the Journal and dropped a bit, to 3% in the Times.

Overall however, when it comes to the quantity of coverage of major topics, the evidence suggests that the Times and the Journal have indeed become more competitive since Murdoch bought the paper.