Despite ebbs and flows in the coverage, health care was
the No. 1 story in the mainstream media from
June 2009 through March 2010

In the 10-month period from June 2009 through March 2010, the health care debate was the leading subject in the mainstream news media, accounting for 14% of the overall coverage studied by PEJ. That put it slightly ahead of coverage of the economy (12%) and well ahead of the third-biggest story, the war in Afghanistan (6%).

But the trajectory of health care coverage was uneven. It spiked in earnest in August 2009 (at 21% of the newshole), when the angry town hall protests generated major attention and remained high in early fall (at 18% in September). It slumped to 10% in November, when the Fort Hood shooting dominated the news for several weeks and early chances for passage of a health care bill seemed to be fading. And in January—when Republican Scott Brown’s Massachusetts Senate race victory seemed to doom the legislation by denying Democrats a veto-proof majority—it accounted for only 4% of the overall newshole.

At that point, the conventional political wisdom held that there would be no health care legislation passed in the foreseeable future. And the media clearly appeared to move on from the issue.

In the last week in February, Barack Obama suddenly re-ignited the debate, first by unveiling his own health care plan and then three days later, by convening a televised bi-partisan summit meeting that generated little agreement but considerable attention.

Once the bill passed, even though the impact of the measure was still being hotly debated, coverage fell off dramatically—another indication of how subjects tend to peter out in the media once the Beltway battle has ended. In the month of April, for example, health care accounted for only 3% of the newshole, trailing such stories as the Iceland volcano and the West Virginia coal mine disaster. 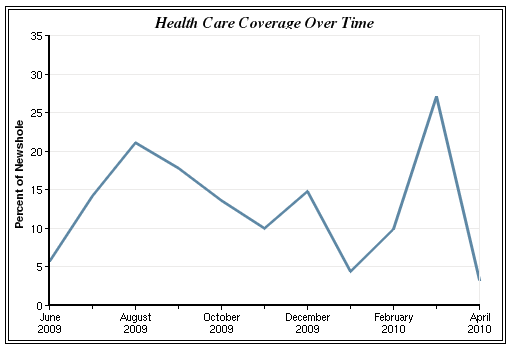 Next: A Talk Show Story
← Prev Page
Page1You are reading page2Page3Page4Page5Page6Page7Page8Page9Page10
Next Page →