In the talk show universe, health care was a much bigger topic for the liberal hosts than the conservative ones 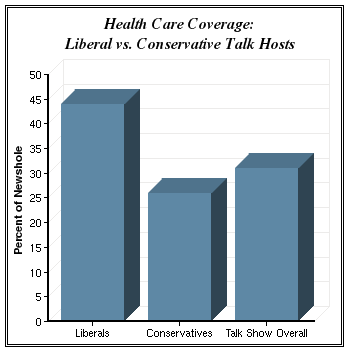 Many times, offense seems to work better than defense in the talk show universe, with opponents of an idea more vocal than supporters. But when it came to health care, liberal talk hosts—who broadly backed new legislation—devoted more time to the subject than conservatives who were resolutely opposed to it.

The left-leaning cable and radio talk hosts devoted 44% of their airtime to the health care issue, compared to 26% for the right-tilting hosts. And to some extent, the liberal hosts had two targets in their sights. While they spent much of their time criticizing Republicans for their opposition to the health care legislation, they were, at times, also quite critical of Democrats and the Obama White House for what they saw as an excessive willingness to compromise on issues such as the “public option.”

On his MSNBC “Countdown” show, Keith Olbermann took an unnamed White House source to task for claiming that liberals were making too big a deal out of the public option. Olbermann, who asserted there was broad support for including that element in the bill, scolded the administration, saying it was time “get your head out of the District [Washington D.C.] and back into the country.”

On his radio program, liberal talker Ed Schultz accused the Democrats of not battling Republicans aggressively enough on the health care issue.

“They’re a bunch of weenies,” Schultz declared. “And the White House is, for some reason, afraid of its own shadow.”

One other finding that reinforces the idea that liberal talkers devoted more time to the issue than their conservative colleagues is the breakdown of coverage by cable channel.

The Fox News Channel, with its prime time lineup of conservative hosts such as Bill O’Reilly and Sean Hannity, spent 20% of the airtime studied from June 2009 through March 2010 on the health care debate. But MSNBC—with an evening schedule that includes liberals Olbermann, Schultz and Rachel Maddow, spent nearly a third of its airtime in those 10 months (32%) on the issue.

CNN, with a more ideologically neutral lineup of prime time hosts, devoted the least amount of time, 13%, to the story.