A Study of the Media and the Health Care Debate

It was a wild political donnybrook and the defining policy initiative of the Obama presidency to date. A Democratic chief executive was staking the crucial first year of his presidency on health care reform—a legislative achievement that had eluded several of his predecessors. And he was facing off against an equally determined opposition spearheaded by a new groundswell of fear about exploding government intervention. 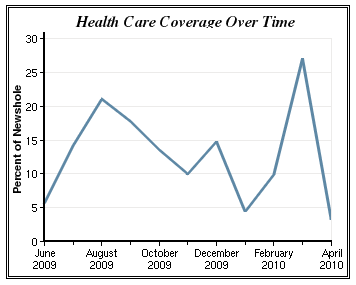 There was a third major player in the health care debate as well. Much of the battle over health care reform, and much of what the public knew or thought about it, played out through a changing media system.

Prior to the legislative battle, curiously, health care had often flown below the news radar screen. Though the system affects virtually every American and represents about one-sixth of the U.S. economy, it accounted for less than 1% of the overall coverage in 2007 and 2008 according to data from the Pew Research Center’s Project for Excellence in Journalism.

It also amounted to the first long-running policy debate the press would have to cover in what was in some ways a new media era. It was one in which bloggers were being recognized at White House briefings, cable news and talk radio seemed to play an ever larger role in the media landscape and new technologies such as Twitter and social media had become important components of politics.

Add to the challenge, the health care industry itself, a particularly complex and often confusing topic. And the cacophony of charges and countercharges, commentary and criticism from advocates on both sides further complicated efforts to comprehend the issue. Indeed, as the coverage continued, the public seemed more confused.

A solid majority of Americans consistently said the health care debate was hard to understand—a number that increased from 63% in July 2009 to 69% in December 2009, according to surveys from the Pew Research Center for the People & Press. [1]

So how did the press cover the most divisive issue of the past year and President Obama’s top domestic priority? A comprehensive study of more than 5,500 health care stories in the mainstream media from June 2009 through March 2010 finds six basic facts worth understanding about how the media handled the debate. It may also offer some lessons for future coverage of other Beltway battles which are sure to follow.

First, health care coverage followed a roller coaster trajectory, spiking dramatically at times and plunging at other points. And the media platforms best suited for ideological debate proved to be especially interested in the subject—particularly the liberal talk media. In the war of words over health care, however, the opposition seems to have prevailed, as their terms and ideas showed up far more often than the key ideas of supporters of the Democrats’ reform plans. The media also seemed to focus far more on the politics and the passions that drove the debate than the health care system it was trying to reform.

Finally, President Obama’s presence as a key figure in health care coverage vacillated markedly over the 10 months studied, lending credence to the idea that he did, at times, lose control of the narrative.

Next: Health Care Tops the News
← Prev Page
You are reading page1Page2Page3Page4Page5Page6Page7Page8Page9Page10
Next Page →