A look at the trajectory of the coverage of the Senate race shows a kind of roller coaster ride of media attention that made this initially, the race that almost wasn’t.

Back in early September, the national and local press seemed geared up for a star-studded battle to succeed Kennedy. Early speculation centered around a number of high-profile candidates who might enter the race including: Ted Kennedy’s nephew and former Massachusetts Congressman Joe Kennedy; former George W. Bush chief of staff Andrew Card; and ex-Red Sox pitcher and “bloody sock” hero of the 2004 post-season Curt Schilling.

Between September 1 and September 12, for instance, the New York Times ran seven stories about the race. In the next three months before the December 8 primary, it published only three more. Eight of those 10 Times stories, moreover, dealt with the issue of decisions by candidates on whether to run.

An examination of Associated Press stories appearing in any newspaper in the country as measured by the Nexis database, found something similar. Fully 13 of the 23 AP stories that were found ran between September 1 and September 12. And 18 of those stories also focused on the question of who was getting in the race and who was not.

Indeed, the question of who would run was a subject that dominated all the early coverage of the campaign examined in this study. A third of all stories written about the race from September 1 to December 8 appeared in September, and a solid majority of these, 57%, concerned speculation about the field of candidates.

By the time it was over, one out of every five stories about the primary campaign had focused on who would run, a subject that was effectively put to rest by October 1. That accounted for 20% of the Herald’s primary campaign coverage and 11% of the Globe’s.

There were 16 stories in which Joseph Kennedy, who never entered the race, was a significant newsmaker. There were 10 stories about Curt Schilling, who indicated on his blog that he might run, though it wasn’t clear how serious he was. And there were seven stories involving former George W. Bush chief of staff Andrew Card, also an ex-member of the Massachusetts House of Representatives.

Those three non-candidates combined for more primary season coverage than Scott Brown, the Republican nominee and eventual winner, who was a significant factor in 28 stories.

After the field of candidates was settled in late September without the celebrated figures involved, there was a measurable lull in the coverage for six weeks. In the interval between September 27 and November 7, less than a quarter (23%) of the total primary coverage was published.

The media did not pay significant attention to the primary race again until the final month, when coverage again intensified. Fully 45% of all the stories about the primary race appeared from November 8 through primary day, December 8, and virtually all of it was produced by the Globe and Herald. 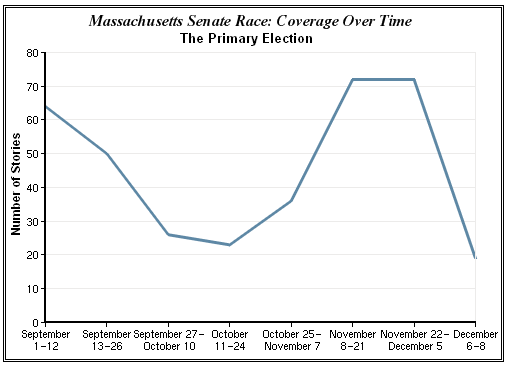 If September’s coverage was overwhelmingly focused on which hats would be tossed into the ring, the candidate debates were the top story in two other months of primary coverage. They accounted for 21% of the somewhat scant coverage in October and 30% of the coverage in the beginning of December leading up to the vote.

In November, the leading story was the one policy issue that really emerged in the campaign narrative, the health care debate, which accounted for 20% of the stories that month. That was followed by attention to endorsements of candidates, which accounted for another 15%.

Following a period of more intense coverage at the end of the primary campaign, the media fell into a virtual blackout period, given the general consensus that Martha Coakley would cruise to an easy victory over Scott Brown.

For the month-long interval from December 9 until January 5, the Globe, Herald, New York Times and the Associated Press combined to publish only 68 articles and columns about the race. Clearly the press did not foresee the dramatic turn the campaign would take.
Two days after the primaries, for example, a December 10 Boston Globe column lamented how lackluster the ensuing race and general election would be, speculating that snow and the Martin Luther King, Jr. holiday would keep most voters away from the polls on January 19.

The same day, the Herald ran a column suggesting that perhaps Brown should lower his sights and aim to be Massachusetts attorney general.

However, the media narrative and the pace of coverage changed dramatically with about two weeks left to go.

After the New Year, Brown began to gain momentum. On January 4, he got a much-publicized endorsement from 2008 GOP presidential candidate and Arizona Senator John McCain.  In a Herald interview published on January 4, Massachusetts’ Republican National Committeeman Ron Kaufman foreshadowed a key dynamic of the campaign.

“There’s a huge anger out there,” he said. “If you can tap into that, nothing is more important than that, politically speaking.”

Then came a crucial moment. A poll by Rasmussen Reports published on January 5 showed that Brown trailed Coakley by single digits, only 9 points, a much closer race than previously thought. The Herald quoted Rasmussen President Scott Rasmussen saying, “It has nothing to do with Brown and everything to do with the political environment we’re seeing nationally.”

Five days later, The Boston Globe released its own poll that still showed Coakley ahead by 15 points. But by then, faced with a suddenly competitive race with major national implications—and with a potential Brown victory denying Democrats a veto-proof majority in the Senate and threatening to derail health care reform—coverage ramped up.

Indeed, during the final two weeks of the campaign, the four outlets studied published a total of 195 stories about the race, nearly three times as many as had been published the entire previous month.

There was even a significant change week to week. There were 47 stories published in the next-to-last week of the general election campaign (January 6-12), a number that skyrocketed to 148 in the final week (January 13-19) as the election became the most important political story in America.

One way of measuring that is PEJ’s News Coverage Index. For the week of January 18-24, which included Election Day and the post-mortems, the Massachusetts Senate race was the No. 2 story in the mainstream media, accounting for 21% of the newshole. Only the catastrophic earthquake in Haiti (27%) generated more coverage.

Next: Topics of Coverage
← Prev Page
Page1You are reading page2Page3Page4Page5Page6Page7Page8Page9Page10
Next Page →