The national media lost interest almost immediately, and then horse-race coverage dominated what was considered a fairly dull and utterly local contest. And when it became clear something was up, it was polling—not journalistic reporting—that caught the wave in the race to succeed Massachusetts Senator Edward M. Kennedy.

In the end, a campaign that first seemed to lack drama and star power was the most important and intensely covered political story in the country. And while they were certainly not alone, the press never saw it coming. 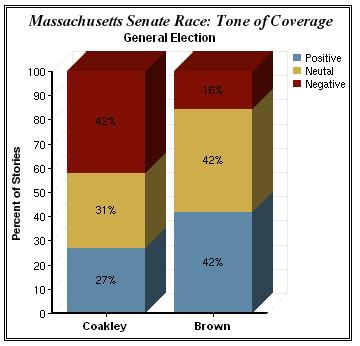 These are some of the findings in a new study produced by Boston University and the Pew Research Center’s Project for Excellence in Journalism about how newspapers covered the Massachusetts special election to fill the seat created by Kennedy’s death. The study covered two time periods. The first was the Democratic and Republican primary races from September 1-December 8, 2009. The second was the final two weeks of the general election campaign from January 6-19, 2010, when the media began to sense there was an actual contest for the seat.

That second period began one day after a Rasmussen Report’s poll that showed the overwhelming Republican underdog, Scott Brown, climbing to within single digits (nine points) of Martha Coakley. That poll, perhaps more than anything else, signaled that a possible upset was brewing and galvanized both the media and political worlds.

Brown’s January 19 victory was seen as such a stunning national bellwether that it was the second-biggest story in the national media the week of January 18-24. But it followed a primary season that was largely static and devoid of drama. A cautious Coakley campaign outdistanced three challengers on the Democratic side, and in a race that got scant media attention, Brown defeated a marginal candidate in a landslide.

Next: Trajectory of the Coverage
← Prev Page
You are reading page1Page2Page3Page4Page5Page6Page7Page8Page9Page10
Next Page →