In both the primary and general election cycles examined in this study, Democrat Martha Coakley was the leading newsmaker. But the bigger story was Republican Scott Brown’s emergence from near obscurity to a major newsmaker in the course of a few days. 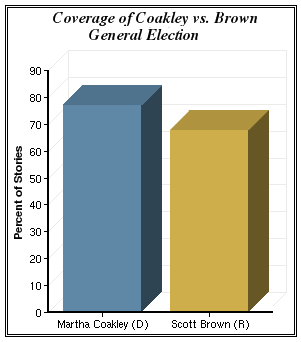 It was a different story in the Democratic primary fight, which attracted far more media attention.

Coakley was the front runner from the start and the eventual winner in the multi-candidate Democratic field, with 47% of the votes cast. She received the most coverage of any candidate in the newspapers and wire copy studied. Of the 362 news stories, editorials and op-eds produced, she was a significant figure in 51%, or 183 of them, more than any other candidate.

But besides Coakley, three other Democratic candidates received a substantial amount of coverage from September 1-December 8.

Michael Capuano, who finished second in the race with 28% of the vote, received the next most coverage, appearing as a significant figure in 44% of the primary campaign stories.

One candidate who was largely ignored by the media during the primary campaign fared little better in the general election—even though he was still on the ballot. Libertarian Party hopeful Joe L. Kennedy (no relation to the famous family) was a significant factor in less than 1% of the primary coverage and did only slightly better (2%) from January 6-19.

Next: Tone of Coverage by Candidate
← Prev Page
Page1Page2Page3Page4Page5You are reading page6Page7Page8Page9Page10
Next Page →