Overall, most news executives are worried about journalism’s future. Nearly six in ten, 58%, believe the profession is headed in the “wrong direction,” while 41% see things moving in the “right” one.

But there is a noticeable split here between newspaper executives and broadcast news executives. Members of ASNE, a newspaper-related organization, are narrowly more optimistic than pessimistic about journalism’s direction; 51% see things getting better vs. 49% who see them getting worse.

Question: “Thinking about journalism overall in the U.S. today, do you think it is generally going in the right direction or the wrong direction?”

Broadcast news executives who are members of RTDNA, by contrast, are strongly pessimistic. Only 35% of those who run TV or radio station newsrooms said the profession was headed in the right direction, while 64% thought it was going in the wrong direction.

Here again, however, we see a split between news executives working at newspapers and those from broadcast operations. Editors who came from newspaper organizations are less likely to think the Web is changing their values. Among this group, 53% think values are changing while 46% do not. Among broadcast news executives the number is 62% to 36%.

Is the Internet Changing Fundamental Values of Journalism?

Among those who see values changing, there is a broad consensus about the direction—  and it is primarily negative. When asked to explain what they meant, majorities of both groups appeared most worried about loosening standards (62% of newspaper executives and 67% among broadcasters), and the bulk of these responses referred to a decline in accuracy, a lessening of fact-checking, and more unsourced reporting.

That was followed by, and closely linked to, an emphasis on speed, mostly in a negative light.

“I worry that journalistic standards are dropping in that blogging and celebrity gossip and Tweets are being confused with reporting and editing that passes a rigorous standard,” wrote one broadcast executive.

A newspaper executive echoed that, offering, “There is too much emphasis, I believe, on getting information fast—even at the expense of accuracy, thoroughness and fairness.”

One broadcast leader cited coverage of the Tiger Woods story as an example of “a culture in which we don’t double check facts like we used to.” The respondent added, “We (the media) reported he was seriously hurt, then not seriously hurt, then involved in a scuffle with his wife.”

Another concern, volunteered by over 10% of respondents, was increased opinion and bias. “[The] Internet is replacing facts with conjecture,” explained one broadcast news executive. “Opinion [is] being disguised as fact,” echoed another.

Neither group of news executives, however, finds the growing role of citizens as significantly influencing the fundamentals of the industry. Just 5% of the news executives mentioned citizen engagement as a source of changing news values (with newspaper executives slightly higher at 7% and broadcast executives at 4%).

Nor is the loss of the press’s exclusive role as gatekeeper of public knowledge at the forefront of change. Only 3% of newspaper executives and 1% of broadcasters volunteered greater access to news and information as an issue in changing standards.

How the Internet is Changing the Fundamental Values of Journalism 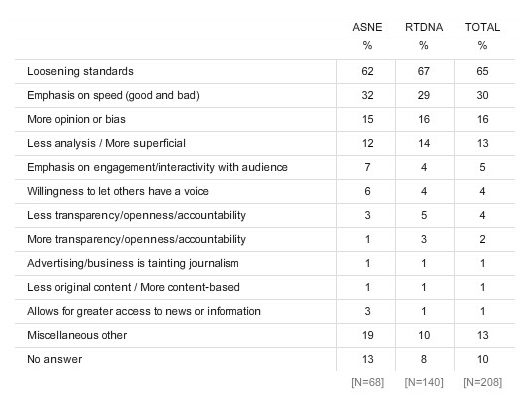 Executives have a complex and in some ways divided view of technology, seeing it as something that embodies risk and opportunity—the latter of which many feel they were slow to embrace. When we asked news executives to volunteer what they would do differently at their organization in the last 10 years if they could do it over again, the most common response was a greater and earlier investment in new technology.

Some of the responses were blunt. The news industry, wrote one broadcaster, acted like the Internet was “likely a passing fad…”

“[We should have] recognize[d] that the Web was the biggest opportunity this industry has ever been handed,” volunteered one ASNE member.

Many others expressed frustration that their organizations resisted investing in technology unless there was a clear promise of immediate financial return. “Invest in new media, despite lack of revenue return,” one RTDNA member pleaded when asked what his operation might have done differently.

“There should have been strategic planning to develop a blueprint for the changes in technology and platforms,” wrote another broadcast leader. “It should have included input from news-gathering staff so there would be a buy-in to a long-range plan.”

The sense that companies were operating without strategic planning came through in various responses.

An executive from the newspaper side said the industry should have been “more innovative from a technology standpoint instead of letting everyone else pass us by.”

And some saw the slowness to adapt to new technology repeating itself all over again with mobile tools.

The next most common thing executives would do differently was hiring and training followed by changing their culture or approach.

“[I wish we had] hired more kids earlier in the game and trained them in the old values. Then turned them loose to use the new technology to help distribute the product,” voiced a broadcast respondent. “I think we probably let the glitzy new tools distract us from the basic job of running a truly professional newsroom.”

Among newspaper executives, though, there was a much stronger inclination to think that allowing content to be free was a major mistake. Fully 30% said they should have charged for content earlier, while only 3% of broadcasters did. Some of that difference may stem from the revenue structures of their legacy platforms. Broadcast stations, in their current form, derive no revenue from subscriptions, while newspapers today derive 20% or more from print circulation.

What News Organizations Could Have Done Differently

Question: “If you could do it over again, what one or two things could your news organization have done differently during the last 10 years to better prepare for the future?” Note: Open-ended question; responses grouped; total may exceed 100% due to multiple responses.

To further probe how news companies might adapt in the future, the survey also asked news executives to rank various factors that had contributed to the current state of the industry. Here, the answers suggested both groups of news executives were more concerned with failures on the business side rather than the journalistic side. In short, news executives believe that missed opportunities to develop revenue have hurt more than any problems in attracting audiences or producing the news differently.

Newspaper executives put the most blame on their failure to develop new revenue streams and secondarily on not charging for online content in the first place. For broadcasters, the biggest problem, also financial, was demanding profit margins that were too high. That was followed by the failure to develop new revenue streams. But broadcasters were next most likely to cite the quality of their content as being insufficient. That was one of the factors newspaper executives were least likely to cite. 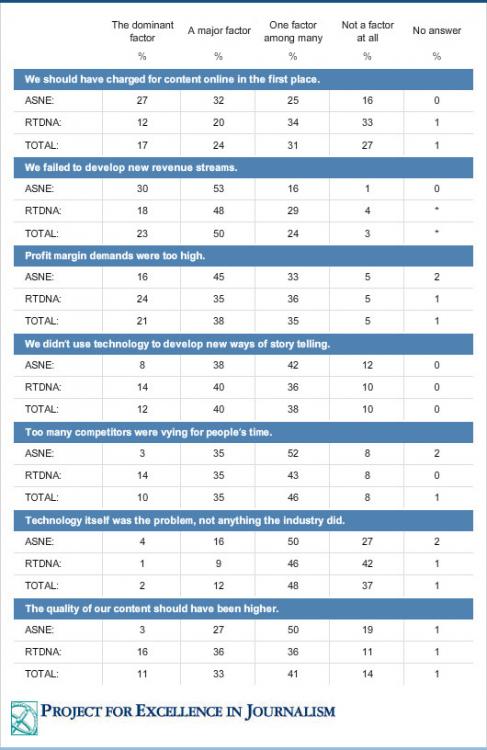 Question: “Here is a list of issues in journalism today. How big a factor do you think each has been in the industry’s current problems?”

Considering the challenges facing the news industry now, one debate in journalism is whether traditional journalistic institutions brought some of the current problems on themselves by letting opportunities slip through their hands or whether these problems were inevitable. Could the news industry have moved more aggressively into areas where new competitors such as Monster.com, Realtor.com or even aggregators have moved in? Or was the fragmentation of the audience, the problems of advertising online and the loss of market share to new competitors going to occur no matter what?

News executives in this survey are clearly divided. When asked what is more to blame for journalism’s problems—are they the inevitable result of technology or more a matter of missed opportunity—news executives are broken into three almost equal camps. A third see the problems as mostly a failure to adapt, about a third as inevitable and just over a third sensing a pretty even mix of the two.

Newspaper executives, though less pessimistic overall about the direction of journalism, were more likely to find fault with their own industry’s failure to adapt (37% felt that way) than to think the industry’s problems were “unavoidable” (29%). Among broadcasters, the split was much more even (30% versus 32% respectively), with the most, 57%, squarely in the middle.

Next: The Matter of New Revenue
← Prev Page
Page1You are reading page2Page3Page4Page5Page6Page7Page8Page9
Next Page →