From a strictly numerical standpoint, traditional journalism’s problems have more to do with revenue losses than with declining audience. In the last several years, for instance, the percentage declines in revenue for TV, radio and print have been close to double or in some cases even triple the rates of decline in audience. And something of a consensus is forming that for the news industry to survive, it must do more to innovate new revenue models, not just wait for conventional display and banner advertising to grow.

There is much discussion, but little gathered information, about the extent to which the industry is experimenting with new models, whether experiments have yielded any positive results, or whether current demands to cut operations leave time and energy for this kind of innovation.

The survey asked a battery of questions to try to get a more solid sense of what is happening. What we found is that, for now, the efforts at developing new revenue focus on fairly conventional options. That mix changes some as news executives look further out at where revenue might come from in the future. And there are significant differences in the way broadcast news executives see the future versus those who are working in newspaper-based news operations.

When it comes to what news organizations are currently doing to generate more revenue, most companies are still looking to their advertising departments. The No. 1 area of effort is “concentrating more on display and banner advertising.” Fully 54% of news organizations listed this as one of the revenue streams they were pursuing “most actively.”

To a significantly lesser degree, though still sizable, the No. 2 area news organizations are concentrating on for revenue is “non-news products.” In all, 38% of news organizations ranked this as among their two most active areas for new revenue.

Search advertising, on the other hand, seems to have lost some of its steam. Over the last couple of years, networks like the Yahoo Initiative developed as ways to help news organizations capture the evolving local search market. But among executives surveyed here, it seems to now be less of a priority. In all, 26% listed building local search as a main area of activity, making it the No. 3 area of activity behind non-news revenue.

Close behind, and even more popular among print, was trying to develop specialty or niche news products that could be charged for. In all, 23% ranked fees from specialty niche sites as one of their most active revenue pursuits, with 30% of newspaper organizations and 17% of broadcasters listing that option.

Pay walls, the idea of charging people for content, at this point, appears to be more of an idea—and particularly among newspapers—than a reality. In all, only nine percent of executives named pay walls as one of their top two areas of development. Most of those responses came from newspaper executives, but even here, they were half as likely to name pay walls (15%) as to name non-news products or specialty niche products as their central revenue effort.

Still another option that has received some attention lately is the idea that news organizations might become more aggressive about raising fees from aggregators, something Rupert Murdoch has reportedly talked about with Microsoft, among others. The actual activity in this area appears to be quite small. Just 5% of news organizations list it as among their two main areas of activity. Just 3% of news organizations described this as a major part of their actions, and another 7% a “small” part.

We also probed this question of revenue experiments further, trying to get a more detailed sense of how important each one was to their news organizations. Was this revenue area a “major part” of their business efforts, a small part, something they are considering but not yet begun, or had they already considered but rejected it?

Here the rankings were similar, but the details were revealing. Concentrating more on conventional advertising came out on top, but it did not stand out quite as distinctly. Overall only slightly more than a third (37%) called concentrating on display and banner ads a “major” part of their effort, though the numbers were higher for ASNE members than RTDNA (47% vs. 31% respectively). The numbers were similar for those who said it was now a “small part of our effort.”

Nearly a quarter of all news organizations (22%) ranked non-news revenue products as “major,” and more than a third (38%) said they were acting on it in a “small way.” Nearly everyone had at least thought about it.

On a national level, the most lucrative form of online advertising has proved to be search, though the market here is controlled largely by aggregators such as Google. But local search is still a largely undeveloped market. How aggressively are news operations working on developing local search?  Just a couple years ago, many were announcing partnerships with firms such as Yahoo and Google to develop things here. Now, that effort seems to offer less promise for many operations. Just 16% of news organizations described it as a major effort (14% newspapers and 17% broadcasters). Another quarter of news organizations (27%) said it was a “small” part of their effort, and here newspapers were more active (44% vs. 18% broadcasters). And 18% of news organizations said they were “considering” the option.

Revenue Models being Pursued Most Actively

Note: Question based on those who are trying two or more revenue models and asked “Of the revenue models you are trying, which two are your organization pursuing most actively?” Respondents were allowed up to two answers.

If most news operations are not yet pursuing pay walls, newspaper executives at least clearly have them on their minds. Fully 58% of these executives said their organizations are looking at the pay wall option, again far more than among broadcasters (18%). And most news organizations have not written off the prospect entirely. Only 11% of news executives across both groups said they had considered and rejected pay walls. That number suggests that the moves here, if they occur, will be cautious. It also means that those newspapers that move toward pay walls may face the more difficult prospect of being pioneers. Some economists have suggested that the prospects of any news organization succeeding with a pay wall is much more difficult if that organization is doing it alone, as opposed to the industry shifting that way en masse.

Level of Experimentation with Fees from Subscription Pay WallS

Level of Experimentation with Fees from Specialty, Niche or Micro News Products

And what about one other idea—of embedding some kind of fee into what consumers already pay to Internet service providers? Only 2% of news organizations listed that as among their two main activities, and only 1% of news organizations (all of them broadcasters) called it a “major” effort. But it may grow. More than a quarter of newspapers said they were now considering this option.

Level of Experimentation with Transaction Fees
From Online Retail Activity

Level of Experimentation with Donations from Nonprofit Institutions

The survey then asked executives to look ahead further, beyond their current efforts, to what they thought would be the most important sources of revenue three years from now. Rather than foresee something substantially different, many of the current trends are expected to continue. Nearly 60% of respondents named some form of advertising as their primary revenue source in the future.

Newspaper executives still believe the answer will be display ads more than anything else, 31%, even though there are growing questions about the efficacy of this kind of advertising online. Another 17% pin the future on increasing their share of search ad revenue. But, nearly a quarter of newspaper executives now believe that in three years their most important source of online revenue will be subscriptions. 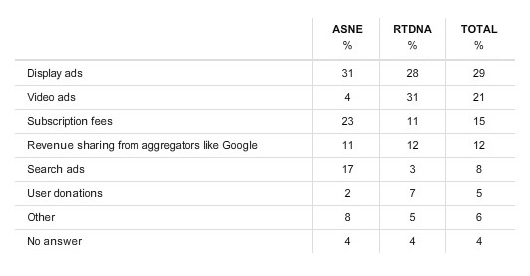 Question: “Thinking about online revenues, which do you think will be the most important source for your organization in 3 years? (Please select one.)

Broadcast executives put less hope in subscription revenue (just 11%) and instead think the biggest source will be video ads, 31%. That is followed closely by a good deal of hope in display ad growth, with 28% naming it first. Only 3% named search ads.

There was also a significant minority who sense that some kind of revenue relationship with aggregators will become the central form of revenue: 11% of newspapers executives and 12% of broadcast. But, only a small fraction of executives have high hopes for an option that relies on civic stewardship—user donations.

Next: New Revenue and Ethics
← Prev Page
Page1Page2You are reading page3Page4Page5Page6Page7Page8Page9
Next Page →