While there were many narratives connected to the financial crisis, from February 1 through August 31, three major storylines accounted for nearly 40% of the overall economic coverage. 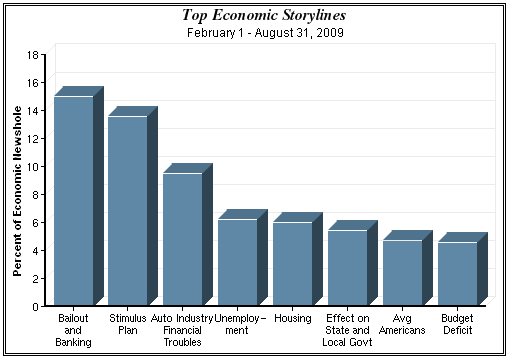 News about the banking industry and the government bailout was the most heavily covered theme and accounted for 15% of the newshole. The Obama Administration’s stimulus package was almost as large (14%). And the U.S. automobile industry’s financial troubles and plant closures was third, filling 9% of the economic narrative.

In general, the stories that got heavier coverage were those that involved institutions,   happened in New York or Washington, and involved deep-seated ideological passions. Consider the top three:

Less Coverage of some Day-to-Day Concerns

As the big three topics of banking, stimulus and cars dominated, there was less  attention devoted to issues that might have had as much, and in some cases more, direct and immediate impact on citizens.

m was more pivotal to the economic downturn than the housing market, which encompassed the sub-prime lending crisis, the home foreclosure epidemic and the dramatic decrease in home values. While U.S. home sales already stood at a 12-year low in February, the situation worsened over time: foreclosures in April rose 32% compared with the same month a year before, and by June, home prices had declined 21% from one year earlier.  Housing accounted for 6% of the total economic newshole, making it the No. 5 topic; its high-water mark was 8% in February.

Another issue that drove the crisis for many Americans—unemployment—also filled just 6% of the newshole. From February through August, the jobless rate climbed from 8.1% to 9.7%, the highest in more than a quarter century. Thus the percentage of Americans who were looking for but unable to find work—the technical definition of unemployed—actually outpaced the attention the subject received in the press.

And stories that tried to explicitly examine the broader impact of the economic downturn on the lives of ordinary Americans filled 5% of the economic coverage.
Even within the financial world, the focus was quite narrow. While stories about the banking sector accounted for 15% of the newshole, coverage of businesses not related to the financial industry was only about one-quarter as large, at 4%.

If one looked inside some of larger narratives for a focus on ordinary lives, it was elusive. The narrative about the auto industry’s hard times and plant closings, for instance, accounted for almost one-tenth of all economic coverage. Yet the storyline devoted about labor issues and worker layoffs in the car industry was negligible, filling less than 1%.

And only 3% of the economic newshole was devoted to the impact of the recession on America’s international trading partners and the world economy.

Next: Who Drove the Economic News (and Who Didn’t)?
← Prev Page
Page1You are reading page2Page3Page4Page5Page6Page7Page8
Next Page →

Covering the Great Recession
Story Lines: Banks, Stimulus and Detroit Dominate the Narrative
Who Drove the Economic News (and Who Didn’t)? “Meme Tracker” Analysis: What Ideas Reverberated in the Media? Why Did Coverage of the Economy Decrease? How Economic Coverage Varied by Media Sector Methodology Topline