To monitor the forces having the greatest impact on the economic narrative, this study broke down economy stories from February 1 to July 3 to examine several different variables. One of those was what or whose actions actually triggered the publication or broadcast of a story.

PEJ found that nearly half of the stories studied (49%) were triggered by government action of some sort. And in most cases (32% of all stories), the action came from the new Obama team—the White House or a federal agency under Obama’s control.

The second-biggest driver of coverage was the media themselves. Nearly a quarter of all stories studied (23%) were generated by press initiative, primarily through investigative or enterprise journalism (17% of all stories).

Business was the third leading catalyst of coverage (triggering 21% of the stories), often through corporate actions or representatives acting on behalf of the company.

Often this Obama-centric approach to economic coverage came from following the president as he tried to sell his policies to the American public and quell political opposition. The economy thus became a proxy for examining Obama’s young presidency as well as tracking the country’s economic status.

On February 5, for example, CNN correspondent Jessica Yellin reported on Obama’s efforts to build support for the stimulus, noting that the White House is “on a belated campaign to sell stimulus and to answer charges that it’s just a whole lotta’ pork…It has been a rough week, dominated by stories about Cabinet-level tax flaps. When the president fanned out across the TV networks to combat attacks on the stimulus, the interviews were dominated by the Daschle news.”

The dominance of the Obama White House as a news generator began almost immediately after the inauguration as the administration unveiled a series of dramatic policy initiatives. On February 10, Treasury Secretary Timothy Geithner unveiled the broad outlines of his TARP II financial bailout plan. One week later, February 17, the president signed the $787 billion stimulus package, forged after a tough and partisan
legislative battle. Just one day after that, Obama introduced his multi-billion dollar housing recovery plan. 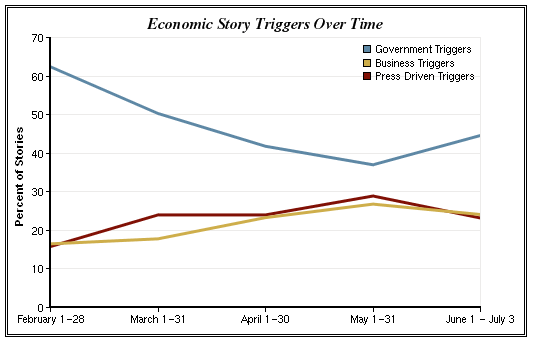 In February and March in particular, when the fight over the stimulus package and the controversy over the TARP program were at their height, fully 56% of the economy-related news stories were triggered by a government entity such as the White House, Congress, a federal agency or a state government. That means more than half of the economy-focused stories during that time were reported as a direct result of some government action or statement. 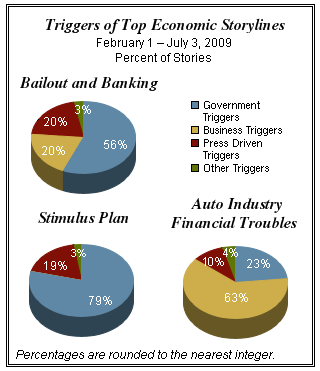 ome light on the question of how aggressive and proactive the press itself was in covering the economy story. Overall, about one-fifth of the economic stories were triggered primarily by the initiative of journalists. But the degree of media enterprise varied notably depending on the topic—and the bigger topics tended to have less press enterprise while the smaller ones had more.

When it came to the biggest economic storylines, the media were more reactive. In coverage of the banking sector problems, for instance, press enterprise and investigations triggered only 14% of stories, and on stimulus coverage, 15%.

The media were more pro-active in monitoring the housing crisis (23%) and quite aggressive when it came to covering the unemployment picture, with press enterprise and investigation accounting for 35% of the triggers.  And in one significant storyline, the crisis’ impact on ordinary citizens, press enterprise proved to be the trigger for more than half (54%) of the stories.

In short, when the coverage was heavily institutional and based on government action, the stories were coming at the press. To cover the lives of ordinary people, journalists had to go out and find the stories for themselves.

One example was a March 12 story in the Kansas City Star that illustrated some unorthodox ways in which the recession was affecting crime. The story told of a man who stole a bank’s overnight deposit box in an economically hard-hit county in Southwest Missouri only to return the following night and give back that part of the loot that belonged to regular citizens. The local sheriff was quoted saying the robber apparently could not bring himself to keep the “little people’s money.”

A wide range of players, however, including some with substantial clout, triggered very few stories at all, including organized labor and unions (less than 1%) and interest groups (less than 1%). Even public opinion polls, often a driver of political coverage, were triggers in only about 1% of the economic stories. This may reflect the fact that certain groups and individuals who may play a public role on other national issues ranging from the Iraq war to the health care debate, do not organize and advocate as aggressively on an issue as complex and multifaceted as the economy.

Whose Voices Were Heard (and Whose Weren’t)?

If story triggers tell us who generated the economic news that the media covered, the sources cited in stories provide insight into the angles and perspectives journalists highlighted. President Obama may have been un 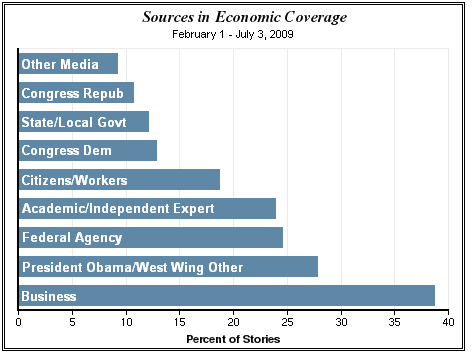 iquely positioned to drive the narrative by proposing federal initiatives and implementing policy. But a far more diverse group of people could comment and react to the implications and wisdom of those actions. [1]

In analyzing sources in stories, however, the fundamental pattern is the same. Those in government, and especially Obama administration staffers, dominated the conversation. Representatives of business and industry came next, followed by academics and independent observers. But the voices of ordinary citizens and people in the workplace trailed behind, appearing in only about one in every five stories.

The president himself or key staffers in the West Wing of the White House were sources in 28% of the stories. Representatives from federal agencies were in 25%. And fully 61% of stories included a government representative of some kind, including those from state and local government.

Representatives of business, those identified as clearly speaking on behalf of the company or corporation, were the next most prominent sources, figuring in about 40% of the stories.

One subset of the American workforce was virtually shut out of the coverage entirely. Representatives of organized labor unions were sources in a mere 2% of all the economy stories studied.

Ground Zero for the Economy Story: New York and Washington

If a handful of storylines tended to dominate economic coverage, the tilt was even more pronounced when it came to geography. As the media covered the economic health of the nation, they did so largely through the eyes, and from the terra firma, of New York and Washington. 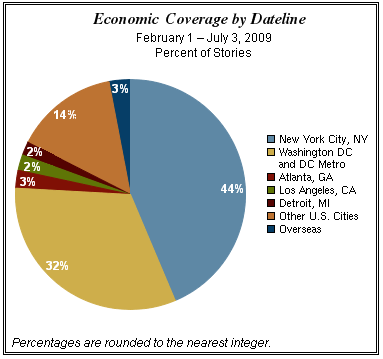 There are some obvious reasons why the nation’s biggest city and its capital would figure prominently in economic coverage. New York is the center of the financial and banking industry that imploded last fall and imperiled the entire economy. And Washington is the seat of the government that quickly scrambled to craft a response to the crisis. Both cities are also home to a very large media contingent and major reporting bureaus. Even so, the percentage of economic coverage that emanated from those two locations, identified in stories by datelines, was overwhelming.

Fully 76% of the datelines on all economic stories were either New York (44%) or metro Washington, D.C. (32%). Only about one-fifth, 21% of the stories, originated in any other city in the U.S. And just 3% were reported from overseas locations.

The New York-D.C. coverage axis was even more evident in the economic storylines that generated the most overall media attention. Fully 90% of stories about the No. 1 economic theme, the troubled financial sector, originated from either New York (50%) or Washington (41%). The numbers were similar when it came to the second-biggest theme, the $787-billion stimulus package, with 83% of the stories datelined New York or Washington.

The third-biggest theme, financial problems be 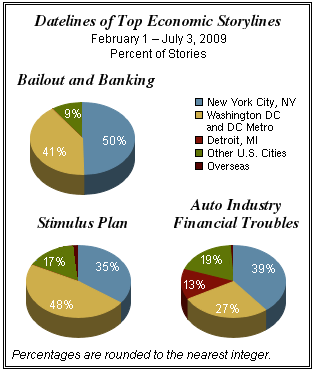 setting the U.S. automotive industry, would seem likely to generate more widespread geographic coverage, given that it affected dealerships and consumers throughout the country. Yet only about one-sixth of those stories emanated from Detroit, headquarters of the automotive industry, while two-thirds came from New York or Washington.

Several other economic storylines that affected Americans in communities around the U.S. were similarly reported out of New York or Washington, including:

One narrative more likely to have reporters fan out from the media capitals into cities and towns was the impact of the downturn on average Americans—a theme that generated relatively modest portion of the overall economic coverage. But even in that case, more than half the coverage originated from Washington or New York. When you subtract two other significant media centers—Atlanta (the home of CNN) and Los Angeles—only a little more than one-third of the stories examining how ordinary Americans were coping originated from the rest of the country.

There is one other metric for identifying who was controlling coverage—the lead newsmaker in each story. (A lead newsmaker, in this study, is someone who is featured in at least 50% of a story.) The findings also suggest the dominance of key Obama Administration players in the news narrative on the economy.

The visibility of the president and his administration far exceeded that of any other newsmaker. Obama was a lead newsmaker in 14% of the economy stories from February 1-July 3. (That included stories that generically referred to “the White House” or “the administration” as well).

That represented nearly five times as much coverage as the No. 2 newsmaker—convicted Ponzi scheme swindler Bernard Madoff (3%). The No. 3 and No. 5 newsmakers were also top Obama officials—Treasury Secretary Timothy Geithner (2%) and Press Secretary Robert Gibbs (1%). The fourth leading newsmaker, Federal Reserve Chairman Ben Bernanke (also 1%), is an independent official, but he has played a key role in crafting a federal response to the crisis and was recently re-nominated for another term in that job by Obama.

1. To be counted as a source, someone needed to be quoted directly or paraphrased in the story.

Next: “Meme Tracker” Analysis: What Ideas Reverberated in the Media?
← Prev Page
Page1Page2You are reading page3Page4Page5Page6Page7Page8
Next Page →

Covering the Great Recession Story Lines: Banks, Stimulus and Detroit Dominate the Narrative
Who Drove the Economic News (and Who Didn’t)?
“Meme Tracker” Analysis: What Ideas Reverberated in the Media? Why Did Coverage of the Economy Decrease? How Economic Coverage Varied by Media Sector Methodology Topline