One inescapable finding about coverage of the economy is the degree to which it began to subside when the sense of worry began to ease slightly.

On the afternoon of April 3, the Dow Jones Industrials closed over the 8,000 mark for the first time in two months. It was the fourth straight week that stocks had risen and marked a 20% increase over the market’s low point back in March. 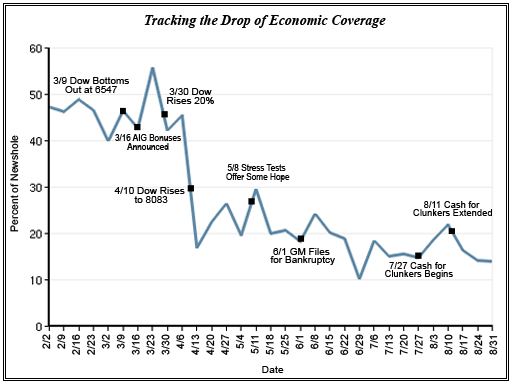 For some in the press, the upswing in the stock market signaled small but real progress on the road to economic recovery—or at least evidence the worst may have ended.

And with those early spring signs of promise, something else happened: Media coverage dropped off dramatically. Prior to April, the economy overwhelmed all other subjects in the news agenda.  During February and March, almost half (46%) of the media space in print and online and time on radio and television studied was devoted to economy-related stories. That was almost eight times as large as the next biggest topic—developments with the new Obama administration, which registered 6% of the coverage.

From April on, however, the media’s attention to the economy dropped by more than half. From April through June, 21% of all media coverage studied was devoted to the economy. That was still three times the next largest subject, terrorism at 7%, but it was no longer sweeping away coverage of a wide swath of other subjects.

The same trend continued deeper into the summer. In July and August, economic-focused coverage fell further to 16% of the newshole as the issue of health care reform began to emerge as a major topic.

What were the causes for this drop in coverage?

Several reasons seem to explain why, beginning in April, the media devoted less attention to the economy.

The Dow, Signs of Hope and the Media: Good News Equals Less News

Above all, the drop off in coverage coincided with signs that the recession might be bottoming out. That began with the beginning of the bull market in stocks in March, followed by other signs, and then rising public opinion about the economy in its wake.
The stock market offers one of the easiest and most carefully watched indicators for journalists covering the economy. Now monitored minute-by-minute on cable, the markets have become something of a measure of the country’s economic blood pressure. 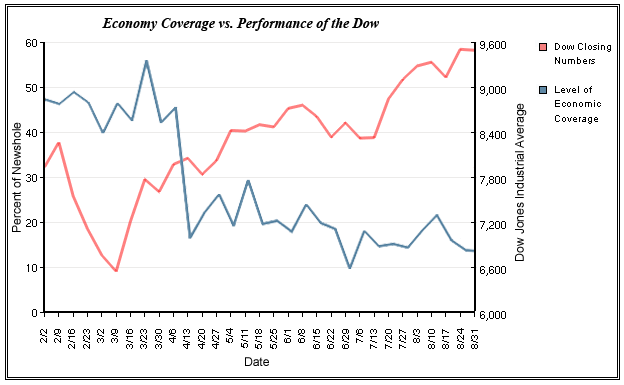 In the early weeks of the year and the new presidency, those readings were down, and the pronouncements in the media were accordingly grim.

On March 6, financial mogul Donald Trump appeared on CBS’ The Early Show, made a fleeting comparison to the Great Depression and added, “I think probably it gets worse, eventually it’ll get better. The question is when.”

Three days later, much-respected investor Warren Buffett declared on CNBC that the U.S. economy had “fallen off a cliff” and that a turnaround “won’t happen fast.”

But later that month, the stock market began to reverse course. After the Dow plunged below 7,000 in the beginning of the month, it finished March on a strong upswing. By early April, it had crossed the 8,000 mark and exceeded 8,500 in May in a long and steady march past the 9,000 milestone.

And in turn, with a slight time lag, media coverage began to move in inverse relationship with the markets. As stock 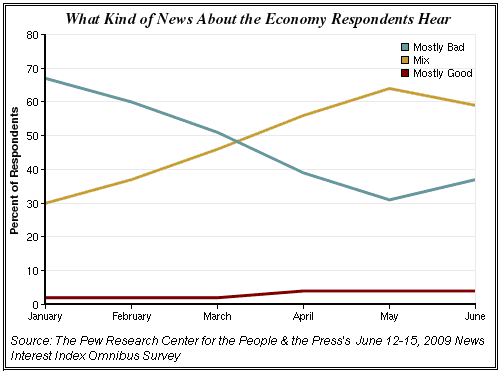 began their steady climb, press coverage of the economy generally began falling off.

One dramatic example occurred in early April. As the Dow moved over the 8,000 mark, coverage of the economy from April 6-12 plunged to 17%, down almost two-thirds from the previous week. Other factors were certainly at play in the diminishing coverage, including Somali pirates hijacking a U.S. ship. But a general pattern was set. As the markets moved up, coverage of the financial crisis began to slow.

As the markets turned, the media also began to report on what were still small signs of economic progress. “The reason that they’ve [investors] been optimistic or buying stocks is because a lot of indicators that tend to tell us where the economy is going are starting to improve or look a little bit better,” declared Hugh Johnson, chief investment officer at Johnson Illington Advisors, on PBS’ May 5 edition of the NewsHour with Jim Lehrer.

The change in coverage was also apparent to news consumers. According to surveys conducted by the Pew Research Center for the People & the Press, Americans said they were getting more mixed signals and less bad news about the economy as time went on.

In the case of the economy, signs of good news began to coincide with the decrease in economic news.

Another key reason coverage of the economy declined over time was that the Washington-based battles over issues like the stimulus package subsided, and with them, so did much of the political-focused coverage.

Most of the political battling took place in February and March when Congress debated the president’s stimulus package signed into law on February 17, the administration dispersed more TARP funds and the AIG bonuses created a furor that put the White House on the hot seat.

The coverage of the stimulu

s was so great that in February, 36% of the economic-related coverage and 17% of the overall news coverage monitored by PEJ was devoted to the stimulus package alone. That was more than twice as much as the next largest story, coverage of Obama’s new administration, which filled 8% of the media newshole that month.

The TARP funds along with the government plan to assist struggling banks accounted for 15% of the economic-focused coverage and 7% of all news coverage in February and March.

And the AIG bonuses controversy, while short-lived, was intense. That  storyline  alone made up 30% of the overall newshole during the third week of March and 8% of the news coverage for the entire month—with some of that coverage focused on when the administration knew about the bonuses.

As these economic storylines dissipated, few others emerged in their place. Instead, coverage overall declined to 24% in April, 22% in May and remained below 20% through August.

Rise of Other Events

Another reason for the decline in financial coverage may be the emergence of a number of other dramatic non-economic stories that also competed for attention as the year moved on. For example, the April release of the so-called “Torture Memos” by the Obama administration, which detailed harsh interrogation techniques used during the Bush presidency, accounted for 21% of the newshole the week of April 20-26, compared with 27% for economy-related news that week. And thanks to dueling national security speeches by Obama and former Vice President Dick Cheney on May 21, the terrorism issue made up 19% of the media’s newshole compared with 21% for the economy during the week of May 18-24.

From April 27 to May 3, the spread of the H1N1 virus was a bigger story (31% of the newshole vs. 20% for the economy). The nomination of Judge Sonia Sotomayor was the largest story the week of May 25-31 (24% vs. 18% for economic coverage). The unrest that followed the Iranian election topped the newshole the week of June 15-21 (28% compared with 19% for economic coverage.)

From June 22-28, pop star Michael Jackson’s death topped the economy (18% vs. 10%). Coverage of Jackson’s passing was large enough to account for 6% of the newshole for the entire month of June, despite occurring during the last week of the month.

Then later in the summer, another issue arose that would soon overshadow the economic crisis.

Another major domestic concern driven largely by a pitched political battle in Washington had emerged to supplant the financial crisis as the primary focus of the media’s attention and energy.

Next: How Economic Coverage Varied by Media Sector
← Prev Page
Page1Page2Page3Page4You are reading page5Page6Page7Page8
Next Page →

Covering the Great Recession Story Lines: Banks, Stimulus and Detroit Dominate the Narrative Who Drove the Economic News (and Who Didn’t)? “Meme Tracker” Analysis: What Ideas Reverberated in the Media?
Why Did Coverage of the Economy Decrease?
How Economic Coverage Varied by Media Sector Methodology Topline