In addition to examining the content on three of the most popular user-based news Web sites, PEJ also closely examined one outlet that offers both an editor-based news page as well as lists of user-ranked news: Yahoo News. Yahoo’s main news page, (http://www.news.yahoo.com/), the most popular news Web site in the U.S. according to both comScore and Nielsen//Net Ratings, is controlled by editors who select stories from 7,000 different news outlets, according to Yahoo News’s Web site. In addition, the site offers three user-driven lists of stories: the most viewed, the most-recommended, and the most emailed.

We closely examined the top stories on each of these pages from June 24 to 29to get a sense of how different (or similar) the user stories were from the editor-selected stories and also to see if there were differences in the stories that were recommended versus those that were highest read or the most emailed.

Looking at the broad topic areas, both Yahoo News and its user-organized pages (emailed, viewed and recommended) were more focused on international events not involving U.S. interests that week than the overall media studied in the News Index. A third (32%) of all stories on Yahoo News main page and 28% of those on its user-organized pages was coverage of events from overseas, such as the Israeli-Palestinian and Lebanese conflicts. 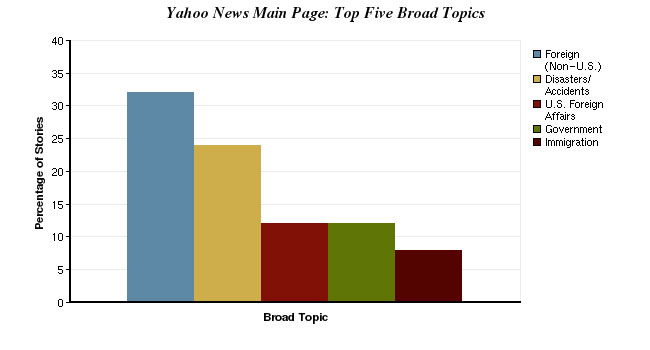 The specific story selections varied even more. On each day studied, at most two or three stories out of the 30 across these three lists corresponded to top stories on the main news page.[1] 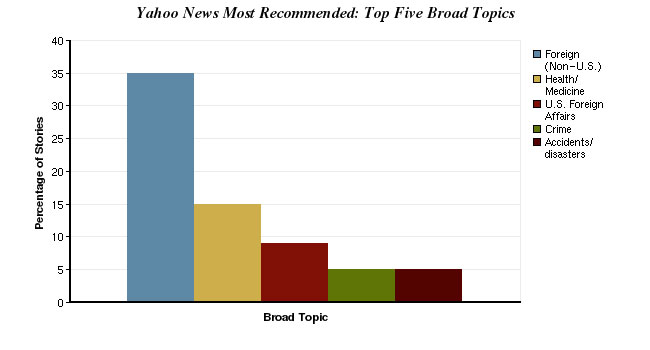 For example, on June 27, Yahoo News’s main page at 9 am led with news of Tony Blair’s resignation. The resignation was nowhere to be found on the user-lists. Instead, it was the death of fashion designer Liz Claiborne as the Most Viewed; a health tip about antioxidants as the Most Recommended story; and the Justice Department subpoena of the White House and the Vice President’s office as the Most Emailed story. 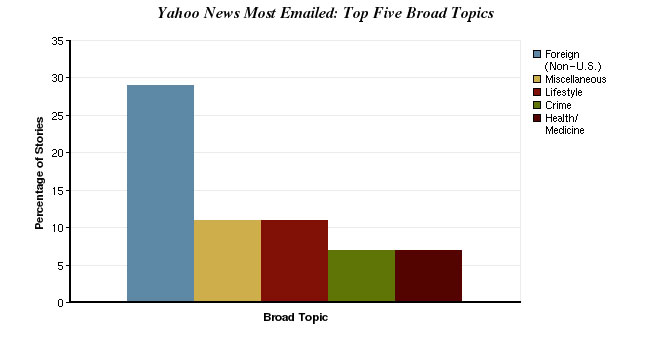 Meanwhile, some stories remained on the list for more than one download. For example, an article about a study that found California to be the state with the worst traffic in the country appeared on Yahoo’s Most Viewed on the evening of June 28 and then again, the next morning.

If users, then, are making different selections than editors, are they also emailing different stories than they view? How do their recommendations to others fit in?

The broad topic areas were similar across the three with the greatest percent of stories that week devoted to foreign affairs that did not involve U.S. interests. This topic accounted for 35% of Most Recommended, 29% of Most Emailed and 22% of Most Viewed. 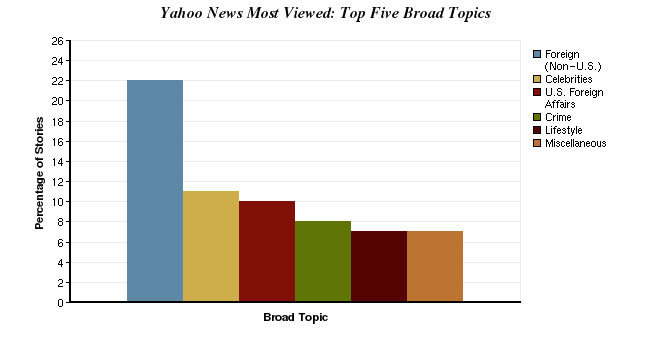 The real flavor of the lists comes from looking at the specific stories. Just under a quarter (22%) of the 314 stories appeared more than once. Most often, this meant it was included in two of the different rankings at the same time. For example, a story about the indictment of four men for allegedly trying to blow up JFK airport appeared on Yahoo’s Most Recommended and on Yahoo’s Most Viewed list on June 29 at 5 pm.

These individual stories reflect the subtle differences between the three most popular pages.On Yahoo’s Most Recommended Page, the highest percentage of coverage was on foreign events not involving the U.S. (it was also the most popular category across the other two user-driven sites but considerably less prominent).

Beyond that, the Most Recommended page was most likely to include “news you can use,” such as articles on the Chinese pet food recall story which enumerated types of food that could be life-threatening to one’s cat or dog. In fact, one in ten (10%) stories on the Most Recommend Page was devoted to this issue.

While the Most Emailed page also included a fair amount of news useful to readers, it was the most diverse and fragmented of the three pages, with just 21% of all stories on this page devoted to the big, continuous stories that dominate the Index (in contrast, 52% of the Most Recommended Stories and 55% of Most Viewed were big stories).Indeed, the most prominent stories, at 2%, were immigration, the story of a missing pregnant woman in Ohio, and the fire in the Lake Tahoe region.There were also a considerable number of oddball stories.The 5pm download on June 26 reflects this eclectic mix of hard and soft news, with stories on the immigration debate and Iraqi refugees heading to the U.S. competing with stories on the world’s ugliest dog and Peruvians’ appetite for eating guinea pigs.

Finally, the Most Viewed page was the most sensational of the three most popular pages, with the most breaking news on celebrity and crime stories. Eleven percent of all stories were celebrity-related stories, compared to 3% of Most Emailed and just 1% of Most Recommended. Meanwhile, crime accounted for 8% of all coverage on Most Viewed, slightly higher than what it was on Most Emailed (7%) and Most Recommended (5%).The lineup at 9 am on June 27 illustrates this trend, with stories on media coverage of Paris Hilton, an ex-marine teacher fending off a would-be pick pocketer, the singer Beyonce, the pro wrestler Chris Benoit accused of murdering his family, and concern that gas stations are ripe for ID theft.

[1] For comparison purposes, we compared the 9 am. list of stories on the main news page with those found on the user-based pages at 5 pm. This way, editor-selected stories had time to resonate with users.

Next: Conclusion
← Prev Page
Page1Page2Page3You are reading page4Page5Page6
Next Page →