In addition to blogs, users could also move to more traditional confines online that were no less opinionated—the Web sites of traditional opinion journals such as the National Review on the right, or the Nation on the left. How have venerable print publications that once focused on interpreting the news a week or more later transitioned to the age of instantaneous analysis on election night?

For the most part, these are not places for instantaneous information. They do not have the depth of either newspaper or TV sites. The National Review functions a bit like a blogging salon online, which might be a welcome environment for someone who wanted to get a rhetorical fix and get a sense of the conservative talking points that night. The Nation probably lags behind its conservative cousin in that regard. Whether this comes at the sacrifice of some greater deliberation is a question worth more consideration. One wonders whether some larger collaborative effort—an opinion magazine collective, one for conservatives and another for liberals, might be more satisfying, deeper and compete as a true destination for such breaking news events.

The Web site of the conservative National Review, the magazine William F. Buckley launched in 1955, had a special elections page on this night. The page was filled almost entirely with original content by National Review staff or columnists. There were some new articles (At around 2 p.m. the latest update was an hour and half old), but most of what someone settling in for an election afternoon and evening would find were links to archived pieces about the upcoming election. 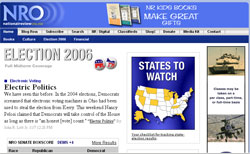 The page’s new content day-to-day was drawn from 10 different Weblogs the site calls “Blog Row.” Some are subject-based (i.e. Bench Memos about legal rulings). Others highlight well-known commentators (i.e. David Frum). Two were specific to the elections—dubbed The Corner and The Sixers. To an outsider, however, it was hard to distinguish the difference between the two. They were both updated frequently over the course of the night, with posts from a number of different contributors, most of which were on-staff. The only real difference seemed to be which staffer contributed to which blog.

The content was primarily musings about the significance of the night, some of them fairly transitory in nature. Consider John J. Miller’s remarks at 9:15:“I'm remembering that six years ago, Allen was a big favorite to beat incumbent Democrat Chuck Robb and, indeed, he won. But the margin was closer than many people expected, just four points. I'm thinking that maybe this guy has trouble finishing his races.”

Other postings were more harshly personal, such as contributor Katherine Jean Lopez at 9:28: “Shame on Pennsylvania. With Mark Dayton retiring and Lincoln Chafee defeated there was an opening for the Most Clueless Senator and Pennsylvania had to fill it?”

This was an environment for junkies, akin to sitting in a bar or a living room watching the returns come in with political junkies. But this was not an attempt to be a utility or resource for people trying to keep track of things. There were references to called races and who was up or down at the moment but no overall round-up or tally.

On the liberal side of the spectrum stands The Nation, the venerable self-styled progressive weekly long edited by Victor Navasky and now in the hands, like the National Review, of a new generation.

Its Web site, thenation.com, would offer a combination of staff material and outside links, material from the magazine and staff-produced blogs. But it was not high tech site in its election offerings. While it featured video and RSS options, it had none specifically related to the campaign on this day. It was rather a text-based environment, faster than the magazine, but not trying to exploit the high technology multi-media nature of the Web.

While the middle column contained the biggest headlines, it did not always offer the most recent news. Many times, these stories were a day or two old. The daily content seems to come primarily from the staff-blogs, though these are far from continuous conversations.

On Election Day, most of the updates were more about moving content around on the site than providing new information.

At 2:30, for example, a piece by Katrina Vanden Heuvel on Advertising Wars appeared in the blog section, but at 4:30 it was moved to the main column on the front-page under an Election06 header.

There were a few information links offered, such as a link at 8:18 to races called on MSNBC.com. Another link, this one to washingtonpost.com, promised “state-by-state election results,” but if users clicked there, the link turned out to be dead.

In the end, the Nation was less of a living room for transitory musings about the evening than National Review. Nor, like its ideological opposite, was it a destination for news of the hour (or even of the day). But it was a place to go for pre- and post-election analysis form the left perspective.

If the Web is populated by aggregators, bloggers, opinion journals, a new trend is specialty sites dedicated to politics. These are a kind of niche media, for people who can’t seem to get enough from the traditional press.

In the last two election cycles, a number of political Web sites have emerged for people who want each latest poll, and candidate comparisons, issues, details on district voting patterns, historical analogies or even an inventory of every poll in every race and every pundit prediction. These are more specialized, deeper and more of an archive than anything mainstream media or their sibling Web sites are approaching, even in an election season.

Come election night, however, these sights were eerily empty. Citizens almost got a sense that these were a one person show and that person was in line at the polling station.

The one-night verdict is that these sites, which can be so rich over the months that a campaign is building as a source for detail, opinion, archival material and more, are out of their element on election night. Neither site prevailed in comparison with other places, as a source for data and results, for nuance, or flat out blogger personality.

A site jointly run by C-Span and Congressional Quarterly magazine, campaignetwork.com was about as slow moving as the C-Span camera angle. Heading into the night, users could get a lot of information about the upcoming elections. There was an interactive map about the races up for grabs, C-Span videos of 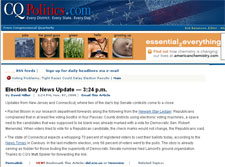 candidate debates as well as videos of candidate ads, and CQ analysis stories like “Voting Problems, Tight races could delay Voting elections” and “Battleground Dispatches for Nov 7-election day.” There were some AP headlines at the bottom of the screen but the bulk of the content originated in-house.

As the night heated up, though, the site failed to even get warm. (Often it seemed like only occasionally was there someone there to strike a match.) There were a few updates (7 in all from 6 until 10) but they were so odd and sometimes inconsequential—someone just called in with this rumor, or this outlet is reporting this random partial election result. The 6:30 update was snippets of what a reporter had heard. The updates seemed random and often trivial, not tied together and frankly just not interesting. At 7:30 the reporter informed any visitors that polls had closed in NC, OH and W.V. It was unclear what the purpose of this feature really was.

What was more remarkable was that despite the void, the site managed to crash twice. The CQ headline from early in the day instructed users to “Stay Logged on to CQ politics.com on Election Night and Day.”

The Conservative political site, Townhall.com, offered a blog that was a bit more active, but only a bit, and action here did not necessarily equal news. Blogger

Dean Barnett gave us more information about his own views, announcing the Santorum defeat to be, a “bloody blow.” He later shared: “In perhaps the final piece of good news we’ll have tonight, my pepperoni pizza was delicious and Frank J’s cat will get what it has coming.”

The other main blogger, Mary Katherine, started the night at the CNN “party” but at 9:20 told us there were technical problems so now she was at home “catching up.” Her posts, often attempted to give folks some numbers or at least link to them, but her solitary efforts were tended to understandably somewhat scattered, and at times proved inaccurate. At 9:56, for instance, she wrote: “Talent Lead Widening in Missouri . . . Katie sees 51-45. Nice.” And, the inside page called “Campaign and Elections” promoted as offering the latest updates in opinion, blogs, news, partners and audio was nothing more than a crudely designed list of columns.

Next: Conclusion
← Prev Page
Page1Page2Page3Page4Page5Page6Page7Page8You are reading page9Page10Page11
Next Page →