With events moving quickly, aggregator sites such as Google, in theory, might seem a perfect place to get a handle on everything that is happening. After all, they can provide users with material from any number of sources and are less burdened with trying to promote their own branded material, which might in the end not be as good as what is available from others.

Aren’t the aggregators a perfect way to navigate the richness of the Web, to help people find the good stuff? Aggregators, in effect, could be the online equivalent of the ultimate TV clicker, letting people know the latest, faster and from a greater variety of places and in a manner easier to digest than trying to flip around the TV dial.

We monitored the three most popular aggregator sites, Google News, Yahoo News and AOL news. From 2 p.m. to 11 p.m. we monitored (or refreshed) the sites every 20 minutes

Their success varied widely this night depending on which site one visited. Yahoo! was pre-arranged for the election in a manner that capitalized on the power of aggregation. Google made no accommodation at all to the special event, leaving it to their computers to edit, which proved less satisfying when something more discriminating was needed. And AOL prepared in such a way that was hard to follow. Depending on where one landed, the aggregators could provide a fairly disjointed and even contradictory account of the campaign’s culmination.

In the end, it was Yahoo!’s combination of computer algorithms, human editors and a simplified, easier-to-navigate approach that seemed to succeed most. A key, in other words, was making choices and leaving things out.

Google News on election night was the same as Google News always is—an algorithm of the top news stories based on which ones are linked to most at any given moment. There was no special place to go just for election news. (“United States” was as close as one could get). Still, from 2 p.m., when we began our monitoring, the top story link almost always happened to be about the election, with several other related links underneath.

What kind of election stories did the computer search deliver? The flow was drawn from an extremely wide array of outlets, more perhaps than any other source. The flow, moreover, was constantly updated.

But tracking what was actually new became fairly disjointed. The articles pulled were from new sources, but were often about the same thing and gave citizens little sense of flow, or timing, about what was happening at the moment. Google News was aggregating press narratives, not information, which on this occasion may not have been optimal.

And if one wanted background on the races or a quick education in what to look for, it would have required reading through until one happened upon just the right story.

It was not until 8:05 that users got any headlines related to exit polls, and the source was not from an American source but The Australian, Australia’s national daily newspaper and Web site (“Early exit polls show Democrats in lead,”).

The first two election calls (Indiana and West Virginia Senate seats, no surprise) came in shortly thereafter in the form of an AP story in the Prescott Herald, a wire-based Web site that calls itself “the voice of rural North Arizona.” A visitor to Google News would not see another race called until 8:45.

In addition to lagging behind other sites, stories were also sometimes contradictory. In the same line-up users saw: “U.S. voters head to polls despite glitches,” Xinhau (8:48 p.m.) and “Electronic Voting Machines Confound Some Poll Workers, Prime Extended Voting Hours,” (International Herald Tribune, AP) was followed moments later by “No Widespread Election Problems Seen,” (NPR, 8:51). The user has to be their own gatekeeper editor here, deciding for themselves whom to believe, and whom to consider less credible. In this context, with events moving quickly, that is probably a tall order.

How did Google fare when it came to the call of the night—the Democratic capture of the House called on network news around 11 P.M.? Google’s report came from Boston’s ABC affiliate, WCVB-TV, at 11:05, “Democrats New Control of House.” 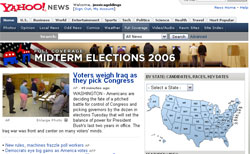 Unlike Google, Yahoo! News had a special Election page, http://news.yahoo.com/fc/US/Midterm_Elections_2006, which contained a wide range of content from various sources, was easy to navigate, clearly labeled, and inviting to probe more deeply. What people would find here, moreover, was a combination of stories, multi-media, interactive features, and even separate pages for more specific tracking of races or party news.

The main election page, for instance, led with AP stories, plus links to live streaming video from ABC News, a slideshow of pictures from Reuters, and a discussion board on posted articles. An interactive map made it easy to search information by state or candidate and to find specific information about them. There were also loads of other features such as “interactives” and even a poll locater tracking women voters.

The page also led to separate pages for all of the more specific issues such as Senate Races, House Races, Gubernatorial Races, U.S. Electoral Process, Democratic Party, Republican Party, and U.S. Congress. There was also was an option to personalize the page and sign up for RSS.

Though packed, the site struck our coders as surprisingly easy to navigate, helped by shading and highlighting. Each story was clearly labeled. If one wanted more specific information about a particular race, it was easy to search by state or race. The interactive features struck our testers as engaging and clearly one of the site’s strong points.

The site was also current. Largely due to its use of AP and Reuters wire updates, Yahoo! was posting race calls as soon if not sooner than cable. One of the closely watched races, the Pennsylvania Senate seat was posted at 8:35—about the same time as Fox, approximately 4 minutes behind MSNBC, 4 minutes earlier than cbsnews.com, and roughly 30 minutes ahead of CNN. From 9:40 until our final check at 11:20, the lead AP headline (and photo) remained “Democrats gain ground in Senate, House,” but the story was continuously updated with the latest calls.

All in all, Yahoo! came closer to meeting the potential that aggregation might offer on this night than any site monitored. 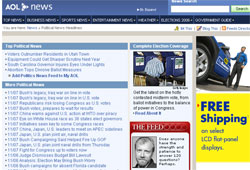 Users of the newly recast AOL might have felt that they had to spend as much time clicking and hunting around the site as they did actually learning about the election. Its coverage struck our coders as disorganized, harder than others to navigate and seemed to suffer from an attempt to perhaps cut the news up too many different ways.

The main election page, for instance, was buried two links deep—links not so easy to find—and once there users were greeted by confusing features. AOL’s various election blogs, called The Stump, for instance, were divided into six areas (All Races, Senate, House, Governor, President 2008, Ballot Issues) and each of these, in turn, were broken up further into sub-issues.

There was a good deal here, if one probed hard enough, from a somewhat hard to find section on “Key Races to Watch,” to a “Newsmakers” box, featuring a picture of Julia Roberts that focused on who she was stumping for, plus a second small box with a feature called “Ask Sam Donaldson.” It took some diligence to find the small boxes with headlines on different races, including the presidential contest of 2008, but generally the content was divided into too many parts and was hard to find.

The lead image at 2 p.m., for instance, was headlined “Iraq weighs heavy on voters minds.” But when users clicked it they were taken to a page of “Latest News” headlines that were all about people at the polls. There was no story with the Iraq headline. Also confusing, the stories here were almost identical to the stories on the main election page that fell under the heading “more Election News.”