The broadcast networks, which have reduced their special event political coverage over the years, played a cameo role Nov. 7. They tried, to varying degrees, to foreshadow the eventual outcome on their evening newscasts, had brief chances for updates at the top of each hour, and then capped off the night with a one-hour prime time special (90 minutes in the case of ABC) that were a showcase for their top anchors.

This limited role has put these programs into an odd but interesting position. On television, the networks have ceded the more committed audience to cable. They also each had their own Web sites for those who wanted more information—and wanted it sooner.

So what is the target audience of the network election shows? Are they to program for the politically interested or assume those people are lost? Should they focus on audiences that might have a more passing interest, and less knowledge, and could use background pieces on the war, the election, the corruption scandals and more? Or are somewhat perfunctory shows now, headline programs designed mainly to attract curious viewers to the networks’ regular news shows, but with minor significance otherwise. Where, in the new landscape, do programs that are on briefly fit in? Can you program successfully for both? Or do you serve neither?

All three of network anchors —ABC’s Charlie Gibson, CBS’s Katie Couric, and NBC’s Brian Williams—were experiencing their first election night in the big chair. ABC, with the strong lead-in of “Dancing with the Stars,” won the night’s ratings battle handily.

Given their limited time on the air, moreover, the broadcasts arguably rely more heavily on the star power of these anchors to carry these election shows and convey a sense of authority and credibility than they did in an earlier era. The networks, according to insiders, have gradually dismantled over the years of the size of their once-formidable election desks, staffed by in-house experts who knew the political landscape county political chairman by county chairman and who could read the political map in their heads. The reduced number of seasoned political hands to draw on was evident on the air.

What we saw, in a sense, was that the networks aren’t quite sure. The programs were not squarely for the uninformed. If a viewer was not particularly interested in politics, there wasn’t much in the way of background pieces or anything out of the usual. Nor were the programs distinctly different in character from what viewers might have found on cable. They were just more abbreviated.

What we saw, not unlike the cable channels, was networks focused on producing a live program, with results flashing by, a quick dissection of exit polls, the effect on the House and Senate, and some live discussion with experts. The emphasis was on the big, broad picture as opposed to the dynamics of important individual races, or background pieces on how and why the election played out as it did. Viewers may have gotten a synopsis of events, but they were more likely to remember a good line uttered by Gibson or the aggressively low-tech white board Tim Russert used to track the results than any reportorial work or interviews, either with politicians or voters. The emphasis seemed to be on picking who would be on the air—featuring the now reduced number of personalities who make up the brand of the news divisions.

The 6:30 newscast, with Gibson solemnly warning that there would be no early calling of races, remained studiously neutral about what was happening in the voting booth.

After reporting on exit poll data reflecting attitudes about the president and the war, Correspondent George Stephanopoulos curiously suggested a “long, tough night ahead for the Democrats,” either an apparent misspeak or was it a misreading of the data? A few minutes later, Gibson, however, talked about “a challenging year for Republicans.” Reports from the extremely tight battleground Senate races in Tennessee and Montana added to the sense of uncertainty and deadlock. The broadcast ended with a look at a roster of possible 2008 presidential contenders. It was, however, substantially free of the “we know something you don’t know” vibe that sometimes accompanies early election night reporting.

By the time the 9:30 special aired, ABC had some catching up to do. It made quick calls of Democratic Senate winners in Michigan, Pennsylvania, Ohio, and New Jersey—projections that had been made earlier on the cable networks with their continuous coverage.

Almost an hour later, at 10:22, correspondent Terry Moran gets off one of the night’s better lines by describing Democrats in Washington: “They can feel it. Taste it. Smell it. And they’re starting to drink it.” Thirty-six minutes later, the network called the House for the Democrats.

The tone set for most of the night by ABC was one of institutional caution along with Gibson’s comfortable conversational tone that evinced a familiarity with key races. In general, this was a glitch-less broadcast that highlighted the professionalism on the news team—even if there was nothing dramatic or particularly revelatory in the coverage.

Gibson also displayed a flash of wit that got picked up in the next day’s newspaper accounts of the coverage by noting that Hillary Clinton’s big New York Senate win “had all the surprise of a Doris Day movie.” A nice line, but it was also one that, for better or worse, probably meant most to the aging network news demographic that can actually remember Day’s celluloid frolics with leading man Rock Hudson.

If ABC was tilting toward caution, NBC was more willing to lean toward prediction, or at least hint.

In beginning the evening, NBC’s half-hour evening newscast seemed determined to give voters an early sense of the trends by leading with correspondent David Gregory’s report that privately, he’d been told that Republicans won’t hang on to the House.

That was followed two segments later with some exit poll data indicating voters were displeased with the handling of the war in Iraq and the broader direction of the country. Tim Russert was next with a report that Democrats “believe” they can carry the key Midwestern races that will determine the fate of the House. That led into Tom Brokaw’s segment concluding that voters were angry about “dysfunction in Washington.” A message, and a not-so-subtle one, was being sent.

During the brief 8 o’clock network one or two minute update, NBC reported that Jim Webb was winning narrowly in the Virginia Senate race with about a quarter of the votes counted. The problem was that the local NBC affiliate in Washington broke in immediately after that with very different numbers in that same Virginia race.

It wasn’t long into the 10 p.m. special—which included the power troika of Williams, Brokaw and Russert—that the latter’s white tote board—first noticed during the tight presidential contest in 2000–made its appearance. At this point, the focus seemed largely on the Senate contests with Williams, trotting out one of the classic election night clichés: “We still have a long night ahead of us.” Perhaps, but not for viewers, as NBC would be off the air by 11:00 to make room for local news and then Jay Leno.

With little specific breakdowns of the individual races, this broadcast opted for broad thematic narratives. The Democrats had tacked toward the center with moderate candidates. They had taken a pragmatic approach and made inroads into the middle of the political spectrum. The Midwest is proving to be the new battleground. It was a national network given a national context to a nationalized election. But the real energy and excitement was attached to the dozens of incredibly hard fought and breathtakingly close local and state battles.

Like NBC, the “CBS Evening News” got out of the box quickly with potentially good news for the Democrats and bad news for the Republicans. Veteran Washington watcher and former interim anchor Bob Schieffer led the broadcast with some of the anti-war numbers in the exit polls and the declaration that “If our exit poll is right, the wind is blowing very much for the Democrats and it is a strong wind.”

Correspondent Jim Axelrod, hammering on the same theme, then weighed in from the White House where he characterized the mood as “not exactly optimistic.” 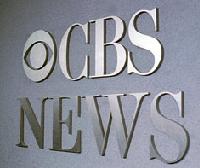 During the 8 p.m. update, the network made an aggressive, early projection that Democrat Sherrod Brown would unseat Republican Senator Mike DeWine in Ohio, an expected but hugely important Democratic pickup. The CBS call of that race came well before any of the cable networks even picked a winner in that contest.

As the prime time special begin, Couric opened with broad promises, vowing to tell viewers the what, why, and what it all means of election night.

Whether the program that followed delivered, or whether news is really in the business of delivering meaning, is another question. Much of the information —Schieffer’s review of the exit polls, Gloria Borger’s backgrounder story on the Senate races and Sharyl Attkisson’s primer on the House battles—didn’t offer substantively more than what had aired at 6:30.

The night moved slowly and as a result, the show seemed to lose some momentum along with it. The special opened with CBS showing the Democrats with a nine-seat House pickup—something repeated at 10:30—and three quarters of an hour later, the tally had only inched up to 11. And despite the aggressive tone set by the first few pieces of the evening newscast, CBS became the last of the broadcast networks to actually project the Democratic takeover. For analysis, Couric reached out to a former Democratic and a former Republican operative.

As for Couric, the reviews were generally polite, if mixed. CBS’s recent house cleaning meant that Schieffer was the single veteran voice, followed by Borger, who is relatively new to viewers as a television presence. As if to illustrate the obstacles Couric faces, consider this excerpt from journalist turned memoirist turned screen writer Nora Ephron’s election-night blog on the Huffington Post: “I don't mean to be sexist about Katie Couric. I think she's brilliantly talented and totally appealing. Every time I turn her on I want to be able to evaluate how she's doing, and I want to be hopeful and positive. But it's impossible for me to make any sort of evaluation at all about her, BECAUSE I CAN'T BELIEVE HOW BAD HER MAKEUP IS.”

Next: The Television Websites
← Prev Page
Page1Page2Page3Page4You are reading page5Page6Page7Page8Page9Page10Page11
Next Page →