True to its reputation and playing to its strengths, public broadcasting outlets provided a balanced diet of election night news and incorporated a lot more outside voices into their coverage than many media platforms. Those sources ranged from the Memphis Commercial Appeal staffer who discussed the Tennessee Senate race on the PBS NewsHour to the Maryland voter who complained about a faulty election machine on WAMU’s call-in show.

On balance, the kind of depth brought to some of the battleground background reporting on PBS, the live pieces capturing the atmosphere from candidate headquarters on WAMU and quality of Robert Smith’s blog on the NPR Web site were refreshing alternatives on a night when some television outlets suffered from too much commentary and not enough basic reporting.

Conversely, public broadcasting probably wasn’t the destination of choice for those focused on the electoral horserace or wanting a nod and a wink about what the exit poll results portended. It didn’t deliver the kind of high-metabolism coverage that often marks election nights on other media. Even the NPR Web site wasn’t geared for the task delivering instantly updated information for those anxiously awaiting the latest numbers.

Not surprisingly, the NewsHour hosted by Jim Lehrer was not the place to be on election night if you were looking for insider punditry or fevered speculation about whether or not Congress would change hands on Nov. 7. There was little of that “we can’t wait to call winners” undercurrent to its sober election eve broadcast.

But true to its nature as the long-form version of the daily television newscast, the program included a combination of reported pieces and interviews (it is not afraid to interview journalists from other media outlets, for example), a wide-ranging look at a number of Election Day issues, and even some historical context.

The newscast paid considerable attention to the question of voter fraud and possible problems in the voting booth, covering it in the first few minutes and then retuning to the subject about a half-hour later during an interview with someone from electiononline.org, an election reform organization. There was a package on voter turnout that included Gwen Ifill reporting from Philadelphia on how both parties had tried to get their partisans to the polls. Ifill then updated that, in an interview with Lehrer, by chronicling the high turnout in battlegrounds states like Virginia and Connecticut.

Back in the studio, panelists Ramesh Ponnuru and Mark Shields were left to handle the NewsHour’s very civilized version of the kind of partisan bickering that is a staple of much of television’s coverage of politics. They also put the issue of voting irregularities into a historical framework by recounting how close and controversial the results in the 1960 Kennedy-Nixon race were. The program closed out its political coverage with a piece on election humor that included everyone from Stephen Colbert to the Capitol Steps.

While the show did not emphasize the horserace aspect of the election it didn’t completely ignore it either. A Margaret Warner story in the middle of the newscast reported on the exit poll data revealing the electorate’s unhappy mood and suggesting a good night for Democrats. But it also warned that exit polls are no substitute for actual voting results.

The heart of the election night programming on this Washington area NPR outlet was a three-hour call-in/talk show—from 8 to 11 pm—hosted by Kojo Nnamdi with three primary guests—David Hawkings, Jonathan Broder, and Jim Asendio.

The show relied on national reports from NPR, local campaigns being covered by WAMU correspondents, Nnamdi’s conversation with his guests, and of course, the input from the callers themselves.

But most of the focus was on the local races – Virginia and Maryland – which turned out to be a fortuitous given the competitive senatorial and gubernatorial races in Maryland and the Virginia Senate cliffhanger which ultimately determined which party controlled that body. Shortly after 9 p.m., a report from Jim Webb headquarters described a “celebratory feeling in the air,” a prescient piece of news that wouldn’t prove truly accurate until George Allen conceded two days later.

The tone was casual and intelligent, especially between Nnamdi and his three chief analysts, with roughly 20 percent of the airtime was devoted to listener call-ins. For all of the media outlets who used their online platforms to invite citizen emails, there’s still something more compelling and authentic about a citizen speaking on the air. And although problems in the voting booths were not a big part of the Election Day story, it was fascinating to listen to one caller describe waiting two hours at a Maryland facility with only eight machines and to hear a Bethesda recount the experience of having the machine switch her Democratic vote to Republican. (She was allowed, with the help of a poll worker, to change that vote.)

Shortly after 10 o’clock a Pakistani-American and first time voter called to discuss how important the ability to cast a ballot was for him. Then assuming the role of amateur media critic he blasted television saying it does a “disservice” to Americans. On an election night where television didn’t particularly distinguish itself, it was the kind of comment that resonated on talk radio. 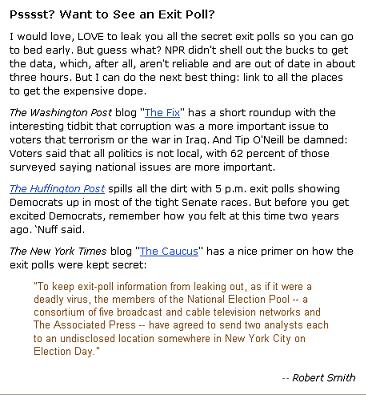 There was a variety of content posted early in the day on the special election 2006 site including audio versions of past programming, analysis pieces by Daniel Schorr and Cokie Roberts, and election-related podcasts. NPR Political editor Ken Rudin also had the courage to post his overall prediction (“Dems Take House, GOP Keep Senate” was only 50% right) as well as his race-by-race calls.

There were also a dozen wide-ranging election related stories—covering everything from the impact of Iraq on the campaign to predicted Election Day surprises—that had links to audio versions as well as transcripts that could be purchased. In addition, there was an RSS feed for election coverage.

The site got off to a sluggish start on Election Day, but at around 6 o’clock, it introduced a well-written blog by correspondent Robert Smith that was updated roughly every 15 minutes and which made for good reading with posts such as “Psst? Want to See an Exit Poll?” (not posted until 7:26 p.m.) and “Red Meat for a Blue Candidate.”

The site also had an updated interactive election map (with a handy icon for “change of party”) although it seemed to lag a bit in making projections in key races, making it not the best place to be for the up-to-the-minute electoral scorecard. This was a venue that offered more value in the quality of its analysis and reporting than through the instant delivery of fresh information.

Next: Magazines and Political Websites
← Prev Page
Page1Page2Page3Page4Page5Page6Page7You are reading page8Page9Page10Page11
Next Page →