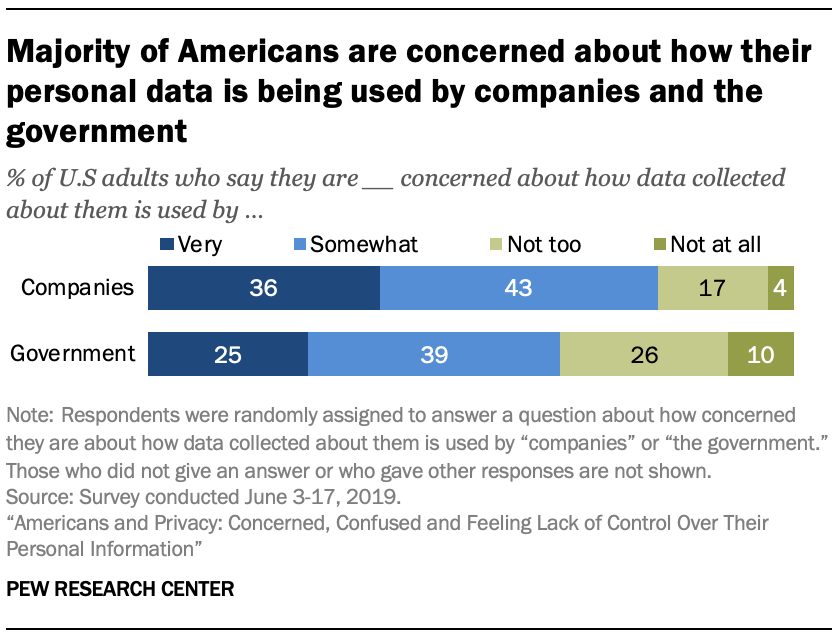 Americans leave traces of their activities, preferences and personal information in many places, both online and off. And this personal data can be fodder for both companies and the government alike. This chapter explores the public’s own experiences and attitudes about their personal data and finds that large shares are worried about the amount of information that entities, like social media companies or advertisers, have about them. At the same time, Americans feel as if they have little to no control over what information is being gathered and are not sold on the benefits that this type of data collection brings to their life. 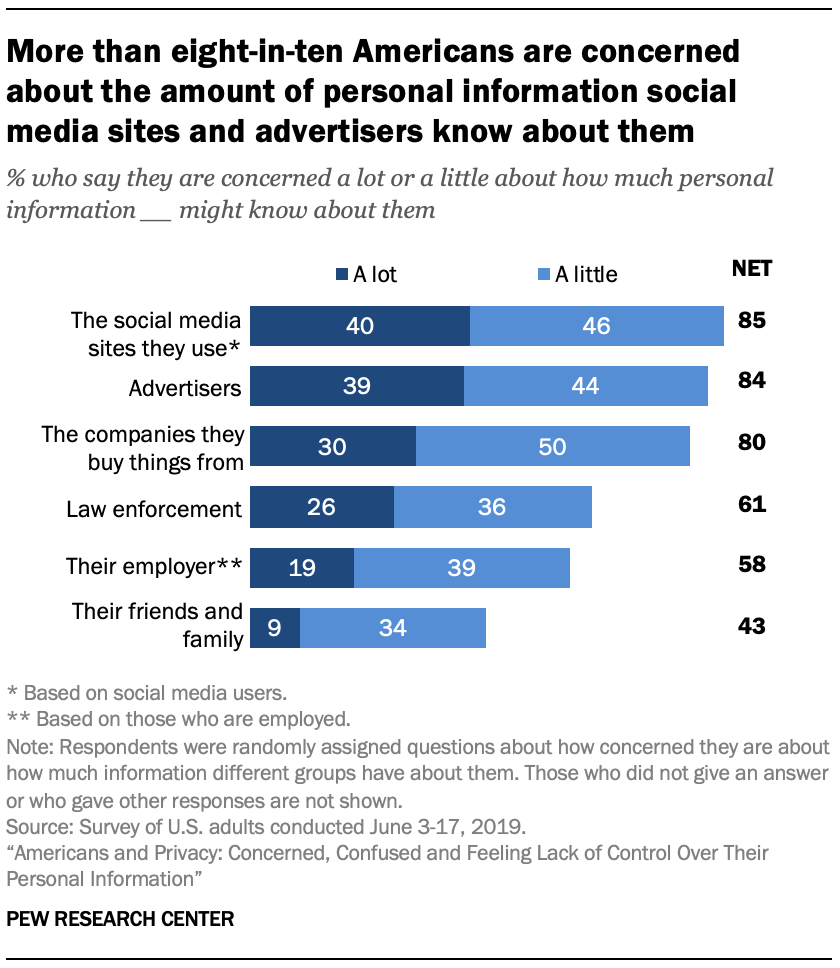 But even as the public has general concerns about data collection, Americans are more wary of certain groups having access to their data than others. At least eight-in-ten adults say they are at least a little concerned about how much personal information social media sites (85%), advertisers (84%), or companies they buy things from (80%) might know about them. The level of concern is felt most acutely when asked about social media sites or advertisers: About four-in-ten Americans say they have a lot of concern about how much personal information these respective groups have about them.

Smaller shares – though still a majority – of the public say they are concerned about how much information law enforcement (61%) or their employer (58%) know about them. And 43% of Americans feel this way about their friends and family. 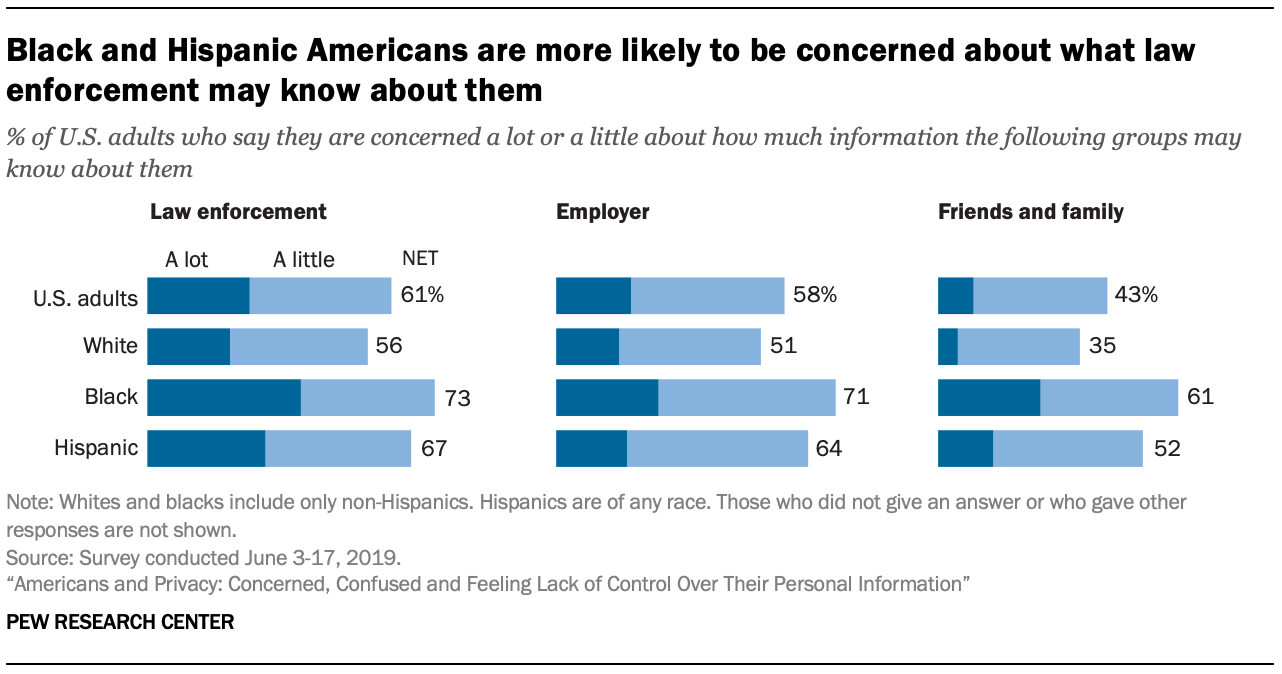 There are some worries that are prevalent among black Americans. For example, black adults are far more likely than their white counterparts to say they are at least a little concerned about the information that their friends or family (61% vs. 35%), employer (71% vs. 51%) or law enforcement (73% vs. 56%) know about them. 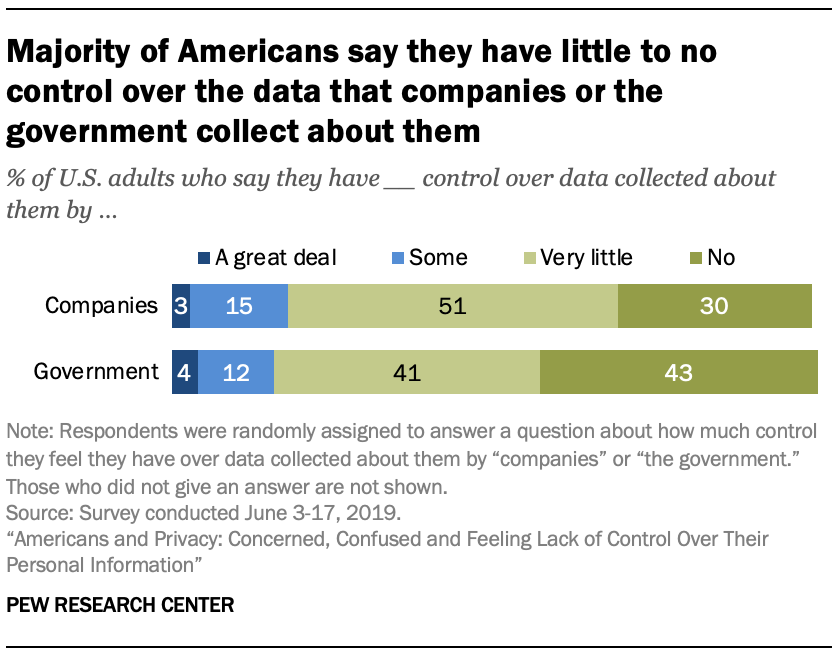 The broader conversation of data collection often centers around an individual’s ability to safeguard and manage who gets access to their personal information, as well as how certain groups use it. This survey – along with previous Center surveys – finds that relatively few Americans feel as if they are in control of the information that is gathered about them. Only 19% of adults say they have a great deal or some control over the data that companies collect about them. And 16% express similar sentiments when asked about the personal data that the government gathers. Put another way, eight-in-ten Americans say they have very little or no control over the data collected about them by the government (84%) or by companies (81%). 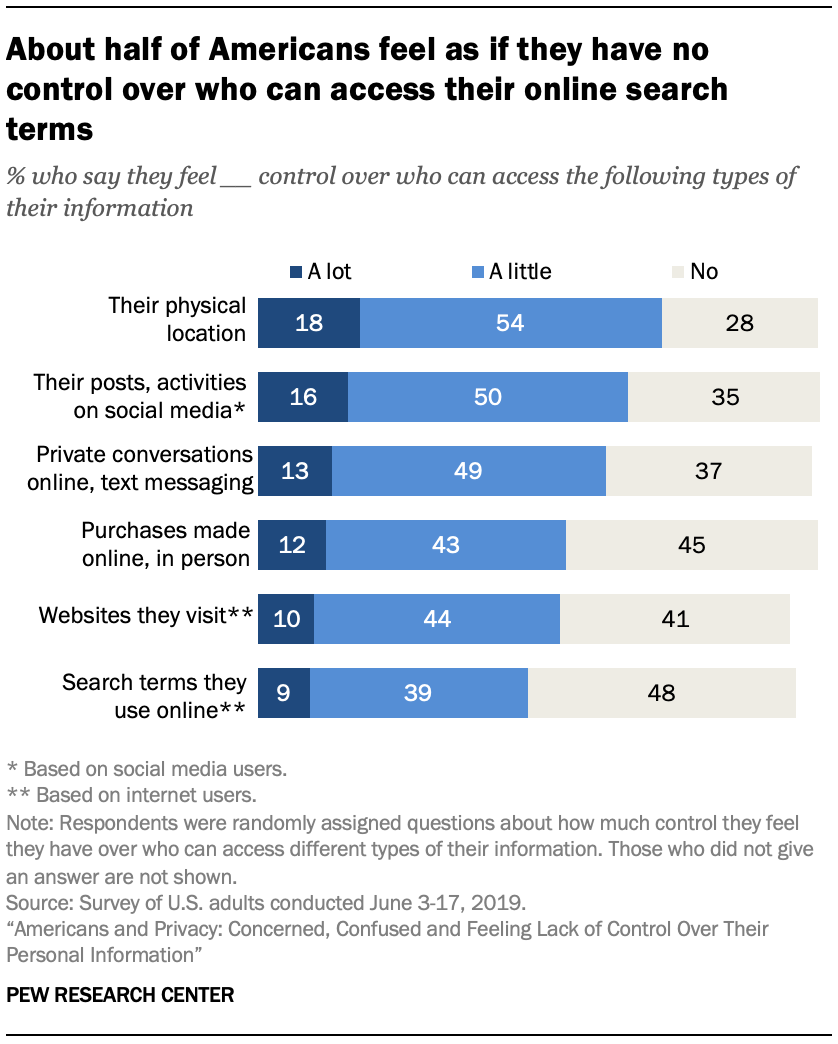 Older Americans feel less control across all six information types when compared with younger groups. When considering how much control they have over who has access to the websites they visit, 37% of Americans ages 65 and older say they have a lot or a little control, compared with 67% of those ages 18 to 29. Adults 65 and older are also less likely than adults under 30 to say they have control over who knows their physical location or has access to their private online or text conversations, for example. 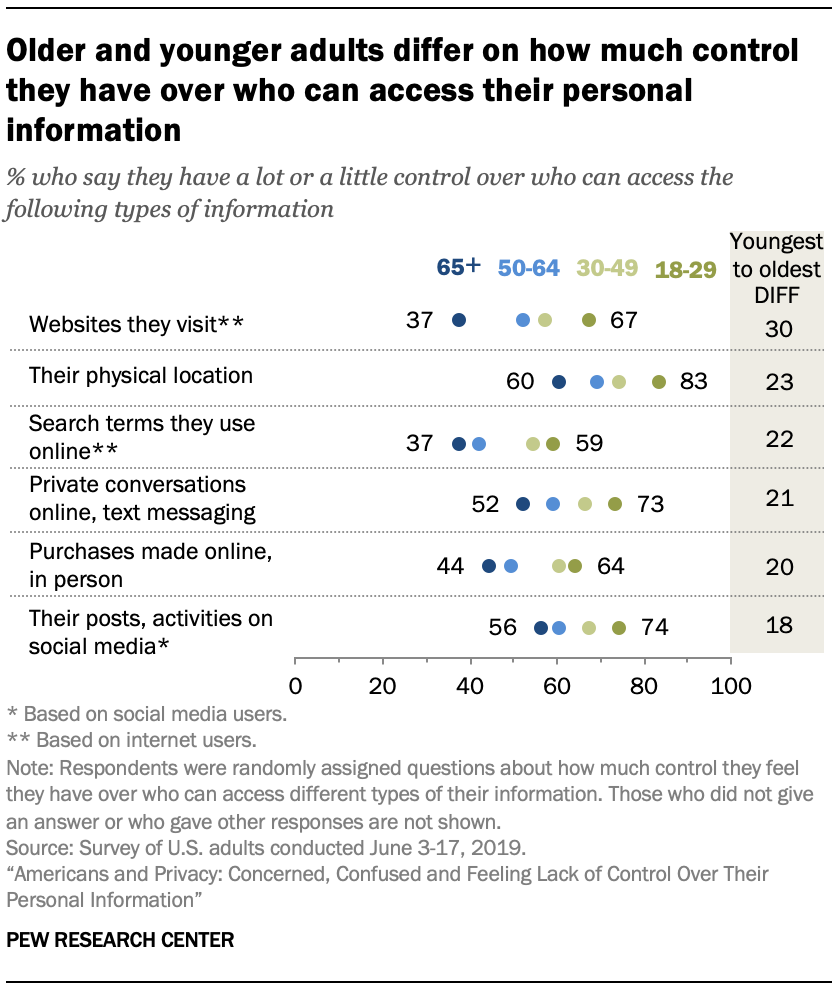 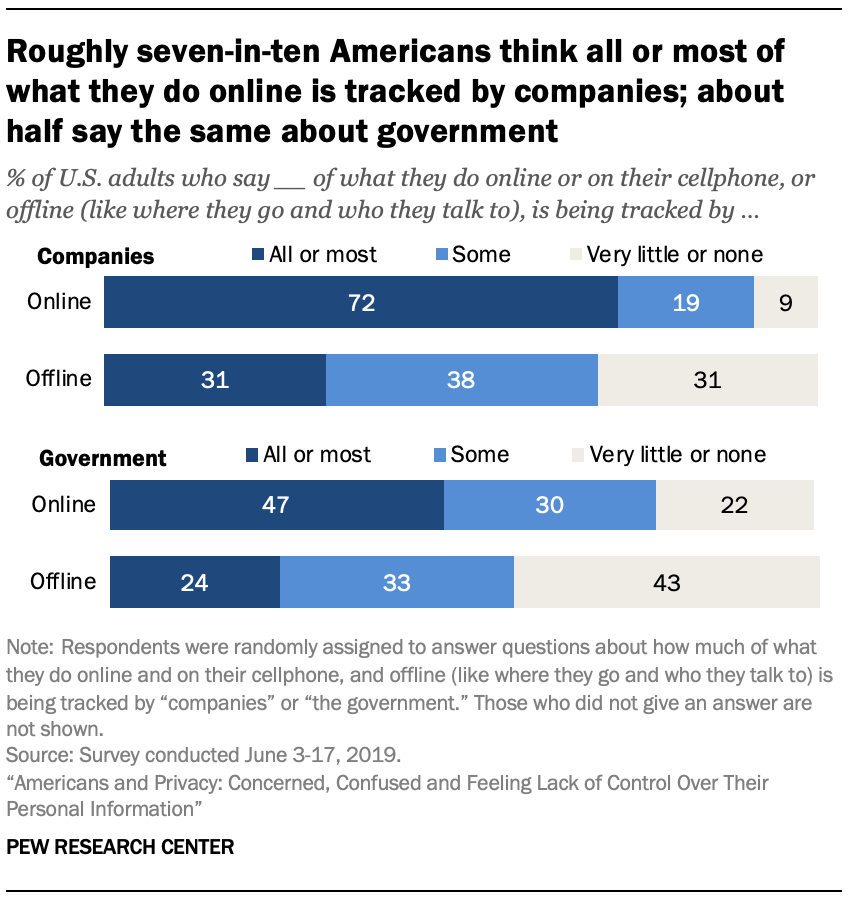 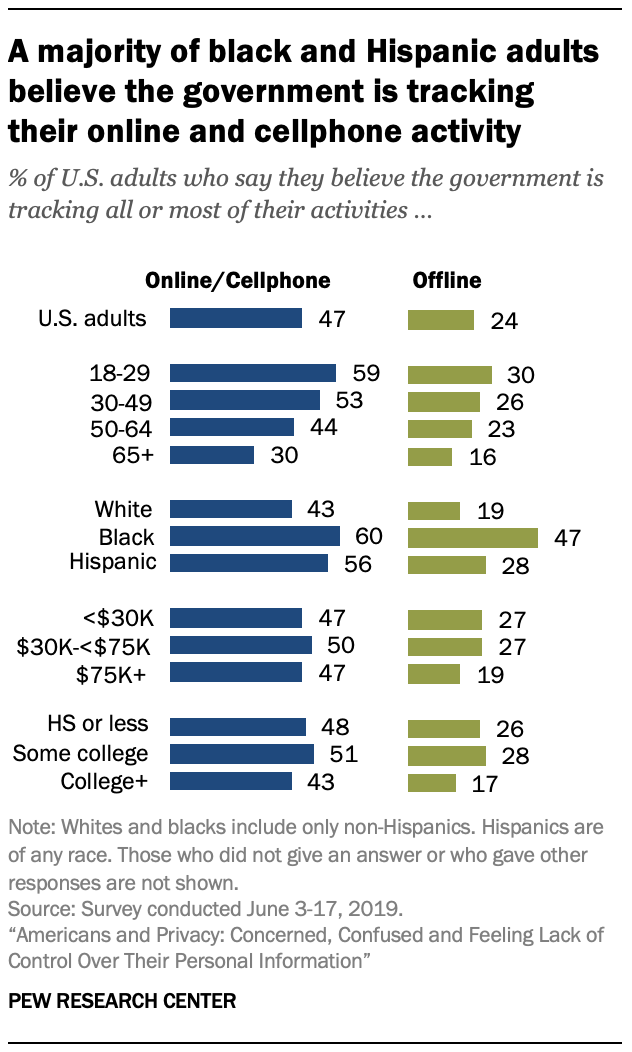 When it comes to Americans’ beliefs about whether the government is tracking them, there are differences by race and ethnicity, as well as by age. 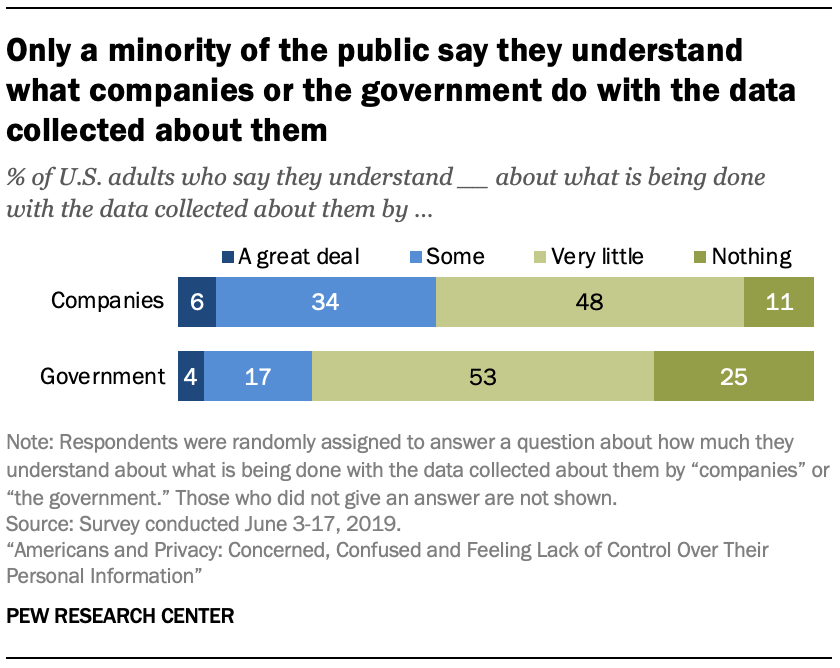 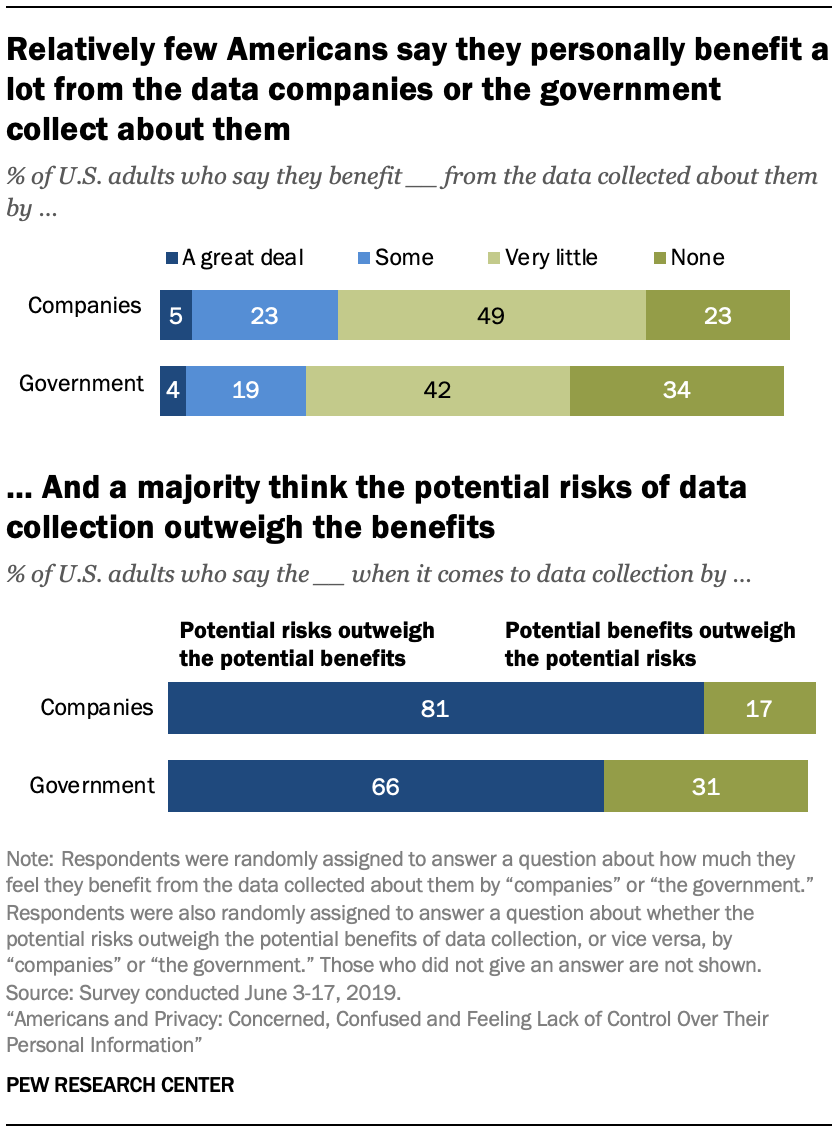 Significant shares of Americans are not convinced they benefit from this level of tracking and data collection. Roughly three-quarters of adults say they benefit very little or none from the data that companies (72%) or the government (76%) collect about them. On the other hand, about three-in-ten Americans (28%) say they get a great deal or some personal benefit from companies’ collecting data, and 23% say the same about the government’s efforts.

When asked which of the following statements best described how they feel, 81% of of adults say that the “potential risks of companies collecting data about them outweigh the benefits,” and just 17% say the benefits they get from companies outweigh the risks.

A similar pattern is seen when asked about the government. Two-thirds of Americans say the potential risks from data collection outweigh the benefits, while about one-third (31%) say the benefits outweigh the risks. 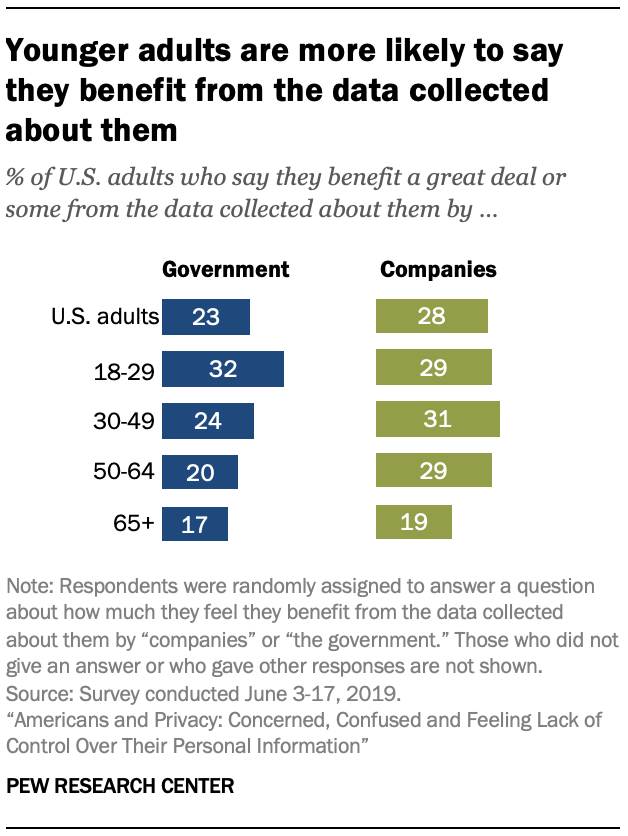 Older Americans also feel they benefit very little from government and corporate collection of data, with just 17% of those 65 and older believing they benefit from the data government collects about them and only 19% thinking the same about data collected by companies. 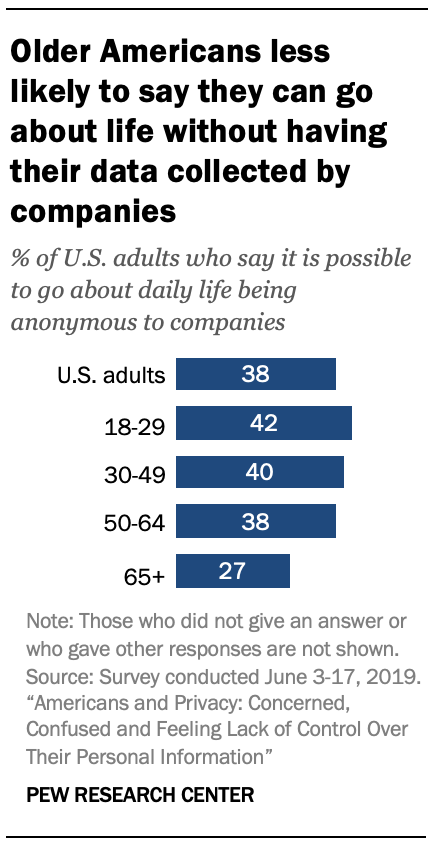 There are some differences by age, with older adults being more skeptical than their younger counterparts about the possibility of anonymity. While 27% of adults ages 65 and older say it is possible to go about daily life and remain anonymous to companies, that share rises to around 40% among adults under the age of 65.

When considering the idea of anonymity from the government, only 33% of adults in both older demographics (50 to 64 and 65 and older) believe it’s possible, compared with a larger share (41%) of those 30 to 49.

Next: 3. Public knowledge and experiences with data-driven ads
← Prev Page
Page1Page2You are reading page3Page4Page5Page6Page7
Next Page →

Americans and Privacy: Concerned, Confused and Feeling Lack of Control Over Their Personal Information 1. How Americans think about privacy and the vulnerability of their personal data
2. Americans concerned, feel lack of control over personal data collected by both companies and the government
Most Americans are concerned about how companies are using their personal dataRelatively few Americans think they have a lot of control over their personal dataRoughly three-quarters of adults think companies are tracking all or most of what they do online or on their cellphoneRelatively small shares of the public say they understand what is being done with the data collected about themRoughly 80% of Americans think the risks of companies collecting data about them outweigh the benefitsAbout six-in-ten Americans do not think it is possible to go about daily life without having companies or government collect personal data
3. Public knowledge and experiences with data-driven ads 4. Americans’ attitudes and experiences with privacy policies and laws Acknowledgments Methodology