Regularly interacting with people of different religious views is the dichotomous dependent variable, where 1 denotes someone who frequently or occasionally interacts with people who hold different religious views than they do, and 0 means they rarely or never do so. The independent, or predictor, variables include age, gender, education level, income level and whether people use social media and smartphones. 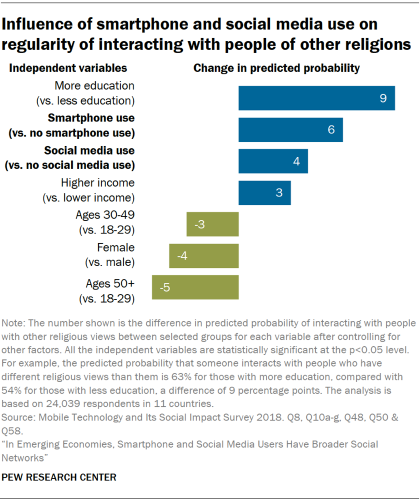 Overall, we find that education, income, age and gender are all associated with the likelihood of people interacting with those who hold religious views different from theirs. But, even controlling for these factors, there is a small but statistically significant relationship between smartphone use and people’s likelihood of interacting with those who have other religious views.

Holding everything else constant, a person with a smartphone has a 60% chance of frequently or occasionally interacting with people who have different religious views than they do in their country. In contrast, someone without a smartphone has a 54% chance – a difference of 6 percentage points.

Next: Appendix B: About the focus groups
← Prev Page
Page1Page2Page3Page4Page5You are reading page6Page7
Next Page →

In Emerging Economies, Smartphone and Social Media Users Have Broader Social Networks 1. Social activities, information seeking on subjects like health and education top the list of mobile activities 2. Social media users more likely to interact with people who are different from them Acknowledgments Methodology
Appendix A: How smartphone and social media use relate to social network diversity
Appendix B: About the focus groups