Digital work platforms allow users to earn money from their labor – in other words, their time or skills. But other platforms allow them to earn money from their capital (in other words, things that they own or possess). This survey examined two types of these capital platforms: home-sharing sites, where people can rent out all or part of their homes for a short period of time, and online selling platforms, where users can sell items ranging from used goods to their own personal handicrafts.

Ultimately, very few Americans (just 1%) have used home-sharing sites to supplement their income. But nearly one-in-five have sold something online in the last year – most often used or second-hand goods. As a group, online sellers tend to be older, wealthier and more highly educated than the gig platform workers discussed in the preceding chapter and are also generally less reliant on the income they earn from online selling. But much like gig workers, online sellers are fairly diverse: Around one-in-five rely heavily on the money they earn from selling items online, and these users tend to be older and less financially secure compared with more casual online sellers. 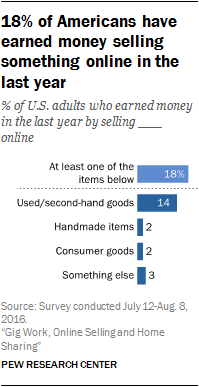 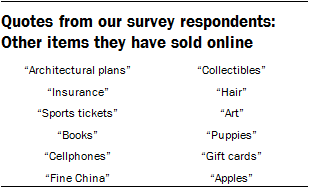 In addition, 3% of Americans say they have earned money in the last year by selling something online other than second-hand goods, handmade items or consumer products. And their descriptions of the items they have sold illustrate the wide-ranging nature of this corner of the digital world (a selection of their responses is included in the nearby table).

Americans under the age of 50, as well as those with relatively high levels of income and education, are especially likely to be online sellers

In comparison to digitally enabled gig work, online selling is also popular among a relatively wide range of age groups. Roughly one-quarter (27%) of 30- to 49-year-olds have earned money from online selling in the last year, as have 10% of those ages 50 and older. And the median age of online sellers is 37 years old – five years older than the median age for gig platform workers.

One-in-five online sellers say social media is extremely important for marketing their products and finding customers, although one-in-three say it is not important at all

Most online sellers describe the income they earn as nice to have, but not essential

Compared with the gig workers discussed in the preceding chapter, online sellers as a whole rely less heavily on the income they earn. A total of one-in-five online sellers describe their earnings as either essential to meeting their basic needs (9%) or as an important component of their overall budgets (11%). But a far larger share (80%) describe the income they earn as nice to have, but not particularly essential to them.

As in the case of gig platform workers, there are dramatic differences between online sellers who depend heavily on the income they earn and those who describe their online selling income as simply nice to have. 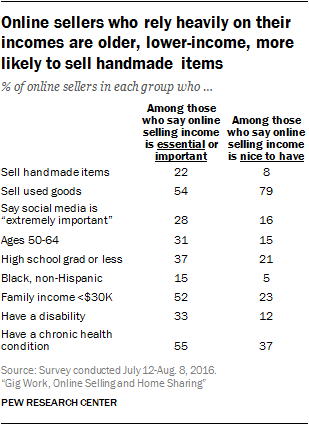 In terms of their actual experiences with online selling, those who depend on the income they earn are much more likely to gravitate toward selling handmade items (22% do so, compared with 8% of those who are less financially dependent) as well as selling items other than used goods, consumer goods or handmade items (35% vs. 12%). They are also more likely to rely on social media in the course of selling their wares, but less likely to gravitate toward selling used or second-hand items.

Compared with more casual sellers, these financially reliant sellers also tend to be older (nearly one-third are 50- to 64-years-old), are less likely to have attended college (37% have high school degrees or less) and have lower incomes more generally (52% say their household incomes are less than $30,000 per year). And many have health or other physical conditions that might make other types of employment difficult: 55% have some sort of chronic health condition and one-third have a physical disability that prevents them from fully engaging in common everyday activities.

Roughly one-in-ten Americans have used a home-sharing site to stay in someone’s home for a period of time, but just 1% have earned money renting out their own homes or properties using one of these sites.

This behavior is quite rare across a wide cross-section of demographic groups, even among those who are relatively likely to utilize home-sharing sites as users. For instance, 24% of Americans with annual household incomes of $75,000 or more per year have stayed in someone’s house after booking it on a home-sharing site – but only 2% of Americans at this income level have earned money themselves from home-sharing sites in the last year.