Social media influences and permeates many aspects of daily life for Americans today, and the workforce is no exception. These digital platforms offer the potential to enhance worker productivity by fostering connections with colleagues and resources around the globe. At the same time, employers might worry that employees are using these tools for non-work purposes while on the job or engaging in speech in public venues that might reflect poorly on their organization.

A Pew Research Center survey of 2,003 American adults (including 795 who are currently employed on a full- or part-time basis) conducted Sept. 11-14 and 18-21, 2014, finds that social media plays some role in the lives of many American workers – but that role is not always clear-cut or entirely positive.1

Workers turn to social media for a range of reasons while at work, with taking a mental break being among the most common

Today’s workers incorporate social media into a wide range of activities while on the job. Some of these activities are explicitly professional or job-related, while others are more personal in nature. The survey asked Americans who are employed full- or part-time about eight different ways they might use social media while on the job and found that:

Policies that regulate how employers present themselves online outside of work may be expected to influence whether these workers use social media at all. However, this does not seem to be the case: Fully 77% of workers report using social media regardless of whether their employer has such a policy in place.

On the other hand, workers are equally likely to say they use social media for a range of purposes regardless of their workplace policy, including:

Relatively few workers use specific social media platforms for work-related purposes, and the impact of that use is not always clear-cut

A relatively modest share of workers say they have incorporated specific social media platforms into their day-to-day work lives:

But among the group that answered yes to at least one of the items above – that is, the subset of workers who use at least one social media tool for job-related purposes – large shares see certain positive or beneficial impacts on their job performance:

On the other hand, these workers are divided on the utility of social media in other respects, especially when it comes to the impact of social media use on their own job performance:

In the end, a majority (56%) of these workers believe that using social media ultimately helps their job performance. One-in-five (22%) believe that it mostly hurts, 16% feel that it doesn’t have much impact either way and 4% see both the benefits and the drawbacks. 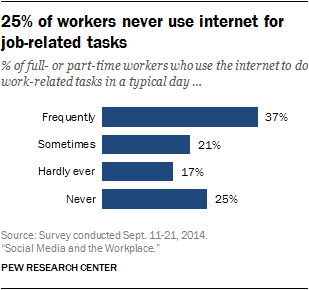