As a rule, libraries’ performance in learning arenas gets better marks from women, blacks, Hispanics, those in lower-income households, and those ages 30 and older. 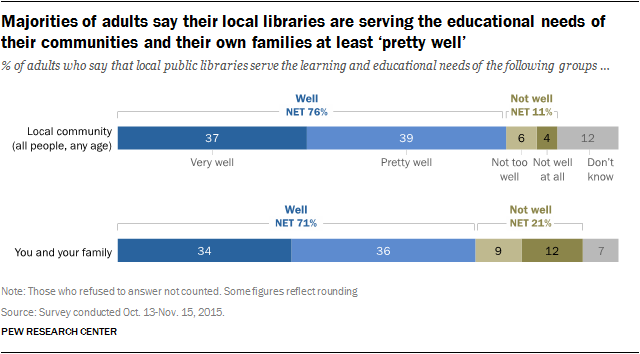 At the same time, many do not know that libraries offer learning-related programs and materials such as e-books, career and job resources, and high school certification courses.

Library users think of themselves as lifelong learners

Additionally, these views arise in a context where strong majorities of adults consider themselves “lifelong learners” and libraries around the country are working to fit their programs and services into local educational ecosystems – both the formal parts of it (such as schools) and the informal parts of it (such as “do it yourself” learning opportunities). A recent Pew Research report found that 73% of adults say the label “lifelong learner” applies “very well” to them. Additionally, 74% of adults have participated in personal learning experiences of various kinds in the previous 12 months – we call them personal learners. And 63% of full- and part-time workers have taken courses or done training on the job to improve their skills in the past year – we called them professional learners.

Recent library users overwhelmingly embrace those ideas and activities. Fully 97% of those who used a library or bookmobile in the past 12 months say that the term “lifelong learner” applies “very well” or “pretty well” to them and a similar share of library website users (98%) also strongly identified with being lifelong learners.

Moreover, 84% of those who visited a library in the past 12 months fit our definition of personal learner, compared with 66% of those who had not recently visited a library or bookmobile. Recent library users are more likely than others to read “how to” publications, take courses related to personal interests, attend learning-related events and meetings, and take online courses.

Interestingly, among workers, recent library users are no more likely than others to fall into the category of professional learners. 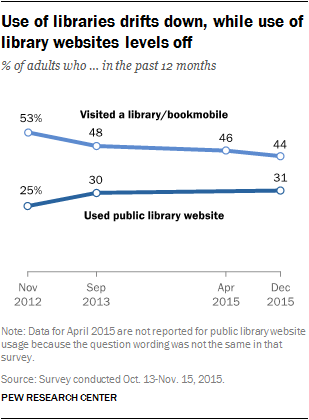 In addition to examining the role of libraries as contributors to people’s learning, this survey also continued the Center’s benchmarking of library usage. Some 78% of adults say they have ever gone to a library, while 44% say they went to a library or bookmobile in the past 12 months.

The findings indicate a downward drift in the number of those who use physical library facilities in any given year. In our first survey on this in November 2012, 53% of adults had visited a library or bookmobile in the past 12 months. 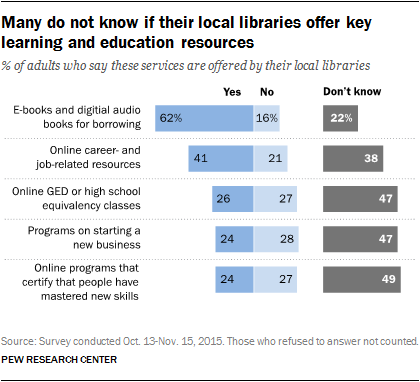 A significant number of libraries have added education- and learning-related material, often in digital form or available on the internet. This survey shows that a portion of adults are aware of those activities, but many do not know about them, including:

Next: 1. Library users and learning
← Prev Page
You are reading page1Page2Page3Page4Page5
Next Page →