The rise of smartphones has brought real-time location data into many aspects of Americans’ lives. Some mobile services use the smartphone’s location to offer directions, targeted recommendations, or other location-specific information to the user. Other services incorporate a location “layer” into other types of functions, while still others exist specifically to share the user’s location with friends or the general public.

To date, our surveys have tracked two types of location-based services: those that use people’s whereabouts to provide location-targeted information such as directions or recommendations, and geosocial services that let users “check in” to certain locations or share their location with friends. However, it is becoming increasingly difficult to delineate these two categories, as social media services incorporate location as an element of user activity and as location-centric services embrace varying degrees of social functionality.

Foursquare, a geosocial service that originally focused on location-sharing and points earned through “checking in” to locations, is now beginning to de-emphasize its system of points, badges, and social location-sharing.12 Instead, it is mining its previous check-in data to offer real-time location-triggered suggestions that incorporate friends’ and other users’ activities and recommendations. On its blog, Foursquare offered examples of the new approach, such as sending a user a note about a “can’t miss dish on the menu” when she arrives at a new restaurant, or suggesting “a few places that your friends love” in a new neighborhood or city.13

Meanwhile, social media services like Facebook, Instagram, and Twitter have added an optional location layer (in many cases built on Foursquare’s API) so that users can show where they are when they post material on the sites. And many information-focused services, from activity-tracking apps to rating sites such as Yelp, incorporate location-sharing and other social aspects as well. 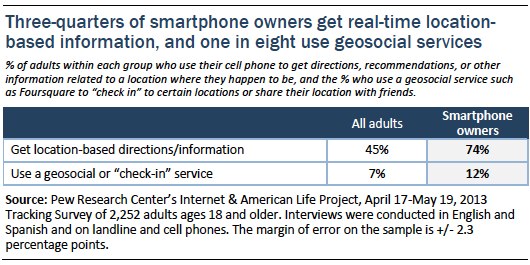 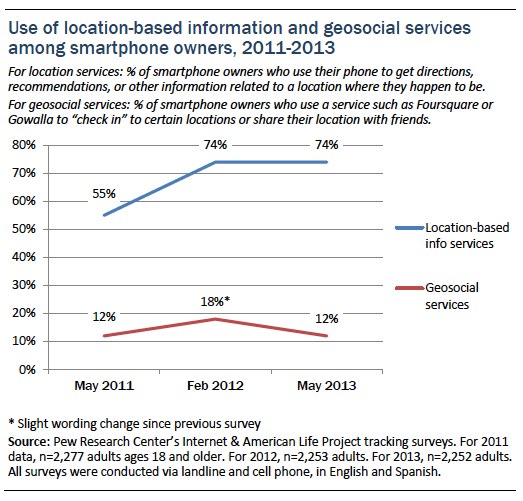 Many web services and apps incorporate a user’s location in order to offer relevant information. For instance, driving directions may rely on the user’s location to offer detailed turn-by-turn directions to another location, or a to-do list app might offer “geo-fenced” alerts, such as reminding the user to buy milk when she is near a grocery store.

Almost three-quarters (74%) of smartphone owners say they use their phone to get directions or other information related to a location where they happen to be. This percentage has held steady in the past year, but the increasing popularity of smartphones means that among all adults, the proportion who say they access location-based information has risen from 41% in 2012 to 45% in May 2013.14 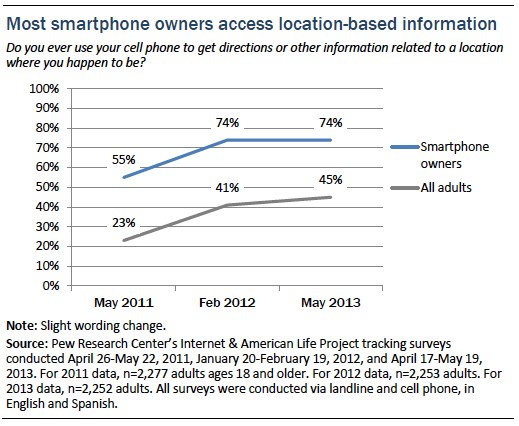 Smartphone users under age 50 are significantly more likely to say they get location-based directions and information than older smartphone users, and college graduates are more likely to do this than adults who only completed high school. There were no statistically significant differences among smartphone owners by gender, race or ethnicity, household income, or community type. 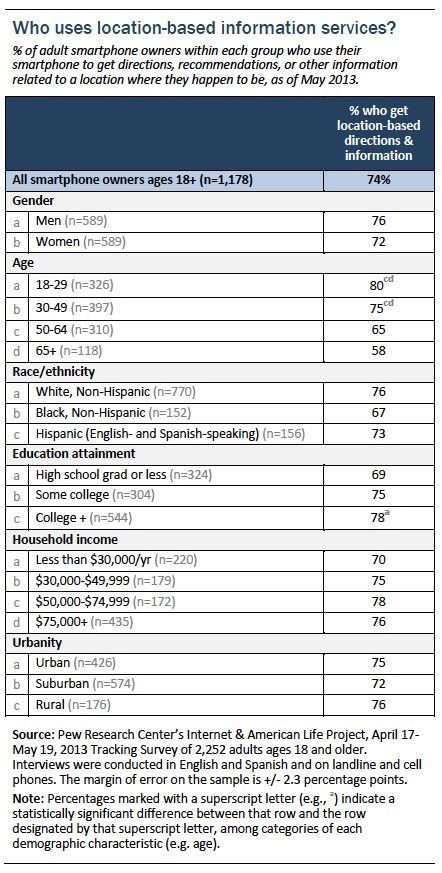 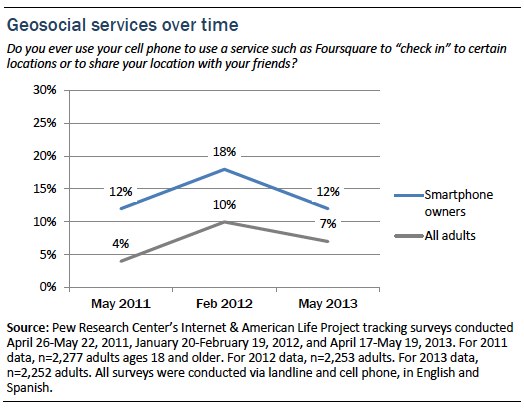 Finally, there were no statistically significant differences in geosocial service use among smartphone owners by gender or educational attainment. 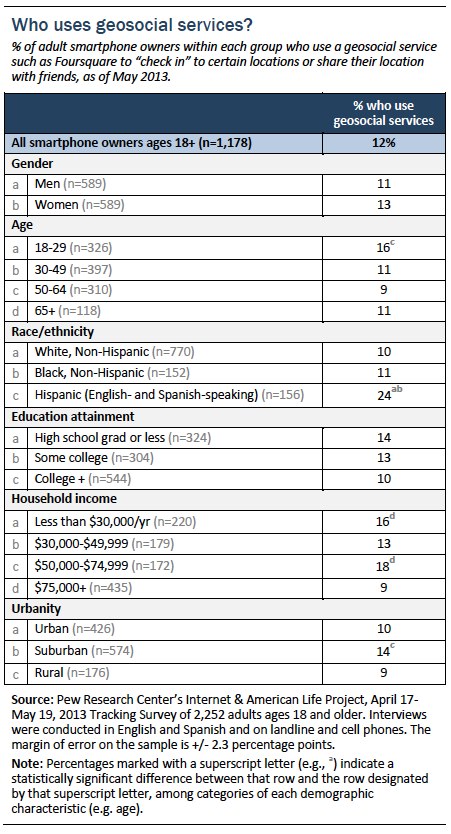 Which geosocial services people use 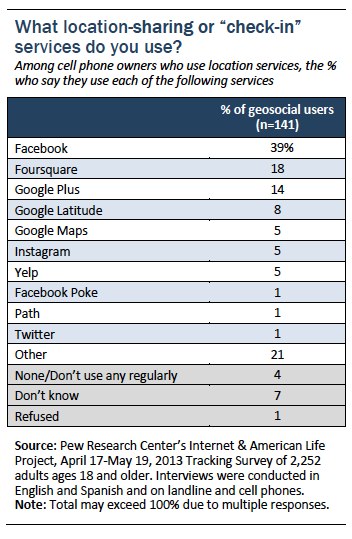 Many social media sites enable users to set up the service to automatically “tag” their updates on the site with the user’s current location. Our May 2013 survey found that 30% of adult social media users say that at least one of their accounts is currently set up to include their location in their posts, up from 14% who had ever done this in 2011.16

The demographics of social media users with automatic location-tagging have changed since we last asked about this activity in May 2011. At that time, we found that men, African Americans and Hispanics, adults in households earning less than $30,000 per year, and those who have not gone to college were significantly more likely than other social media users to use automatic location-tagging, and there were no significant differences between different age groups.17 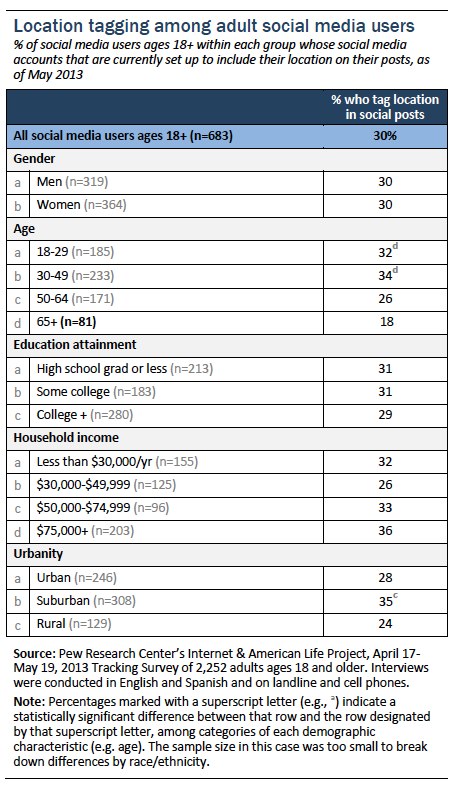 Previous surveys have also asked teens ages 12-17 about their social media practices, including location tagging. Our recent report on how teens share personal information and manage privacy settings on social media, “Teens, Social Media, and Privacy,” found that 16% of teen social media users said they set up their profile or account so that it automatically includes their location in posts.18

Boys and girls and teens of all ages and socioeconomic backgrounds are equally likely to say that they have set up their profile to include their location when they post. However, teen social media users living in suburban areas are significantly more likely to say they tag their location on social networking sites than teens living in rural or urban areas, as shown in the chart below.

Focus group data suggests that many teens find sharing their location unnecessary and unsafe, while others appreciate the opportunity to signal their location to friends and parents. 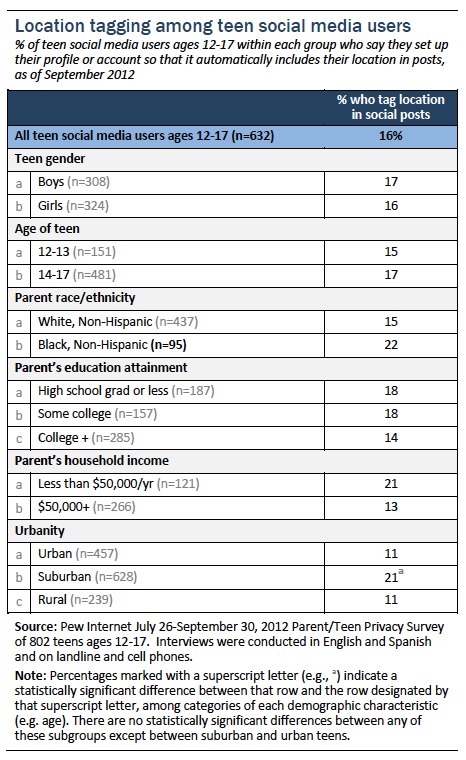 Even as most smartphone owners use their phones’ geolocation abilities to get location-specific information, data from earlier surveys also shows that many mobile users of all ages say they have turned off location-tracking features at some point due to privacy concerns.19

Among adult cell phone users ages 18 and older who have downloaded apps to their cell phone, 35% have turned off the location tracking feature on their phone at some point because they were worried about other people or companies being able to access that information. This works out to 19% of adult cell phone owners overall as of April 2012.20 For more information on cell phone owners’ activities, see our 2012 report “Privacy and Data Management on Mobile Devices.”

In a different report exploring teens’ mobile privacy practices, we asked teen app users ages 12-17 a similar but differently worded question. We found that as of September 2012, almost half (46%) of teen app users say they have turned off the location tracking feature on their cell phone or in an app because they were worried about other people or companies being able to access that information.

Yet as our earlier report on teens and mobile app privacy noted, some of the people those teens are concerned about may be their own parents. As early as 2009, the Pew Internet Project found that about half of parents of teen cell phone owners said they used the phone to monitor their child’s location in some way.21

Girls are significantly more likely than boys to say they have turned off location-tracking features, though there are no differences between younger and older teens. There are also no differences in the likelihood that a teen apps user will disable a location tracking feature according to household income, parent’s education level, or race and ethnicity (not shown in the chart below).22 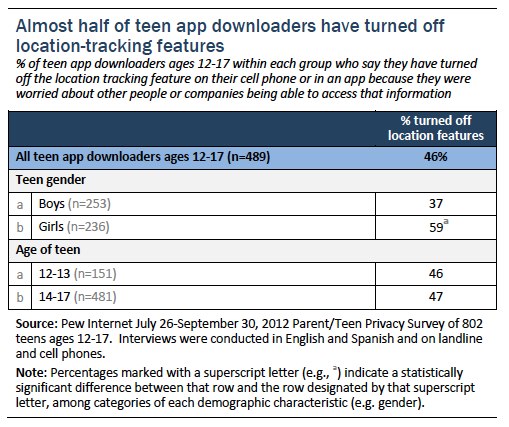