Six percent of online adults are reddit users,1 according to a nationally representative survey by the Pew Research Center’s Internet & American Life Project. This is our first survey that specifically examines reddit as a standalone platform, and it finds that young men are especially likely to visit the site. Some 15% of male internet users ages 18-29 say that they use reddit, compared with 5% of women in the same age range and 8% of men ages 30-49. 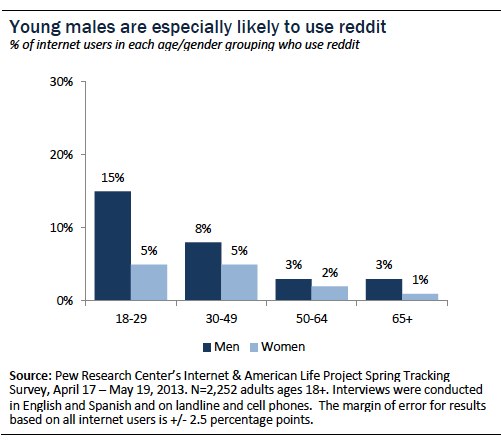 Self-described as the “front page of the internet,” reddit is a bulletin of user-submitted text, links, photos, and videos. The site hosts active sub-communities on a wide selection of topics, ranging from world news headlines, to animal GIFs, to fan forums and various niche topics. The popularity and prominence of material on the site is determined by voting from the reddit community. reddit gained widespread publicity when President Barack Obama took part in the site’s “Ask Me Anything” series in August 2012, and again in April 2013 when the site was used as a collaboration space for amateur sleuths attempting to identify the perpetrators of the Boston Marathon bombings.

Overall, men are twice as likely as women to be reddit users, those under 50 are significantly more likely to use reddit than those 50 or older, and the site is much more common among urban and suburban residents than among those living in rural areas. Indeed, just 2% of internet users ages 50 and older—and 2% of rural residents—say they use the site. 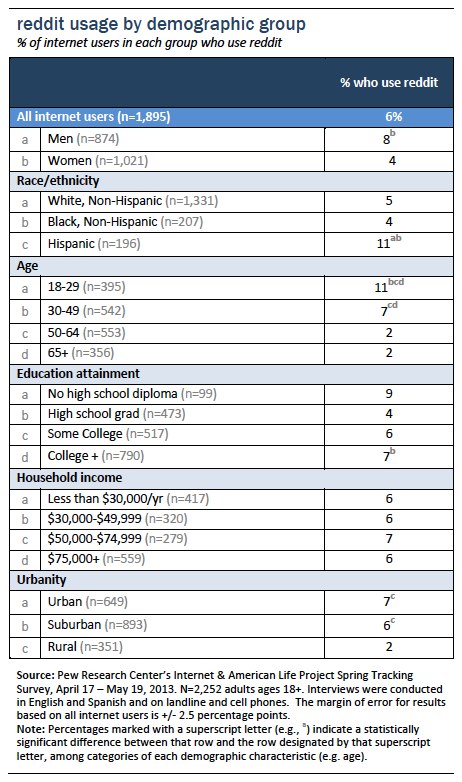 reddit features a user-voting system  (called up- and down-voting) to rank posts, comments, and links within its sub-communities (known as subreddits).  Subreddits and posts can range from the serious to the absurd, and from general topics to niche interests.  The front page of reddit features popular submissions from across the site and typically rotates top posts regularly throughout the day.  People who use reddit are called redditors.

One of the most popular subreddits, IamA (“I am a”) features a popular question forum called Ask Me Anything (AMA). redditors with “something uncommon that plays a central role in your life” or who have experienced “a truly interesting and unique event” host a session with the prompt “I am a…..ask me anything.”  Other redditors can then submit questions and comments.  Examples vary from “IAmA prison guard at a maximum security prison, AMA” to “IAmA wildlife cameraman. AMA” and “IAmA Liberal Saudi Woman Living in Riyadh, Saudi Arabia. AMA!”  Celebrities have also participated in AMA, including Stephen Colbert, Judy Blume, Paul Krugman, and Bill Gates.

For a more in-depth overview of the site, visit Mashable’s “Reddit for Beginners” or poke around the site at reddit.com.