The Mobile Giving Survey obtained telephone interviews with a sample of 1,003 adults who were listed in making donations via text messages on their cell phone and had consented to further communications on their cell phone at the time of their initial contribution. The survey was conducted by Princeton Survey Research Associates International. The interviews were conducted in English by Princeton Data Source from Sept. 19-Oct. 13, 2011. The margin of sampling error for the complete set of data is ±3.1 percentage points.

The universe for this study is cell phone users who contributed money to Haiti earthquake relief via text messages that were routed through the mGive.com servers after the earthquake in January 2010, and who consented to further contacts at the phone number used to make their contribution.

The universe contained 565,211 cellular phone numbers.  The numbers were randomized and then grouped into replicates. Replicates were released in order until the targeted number of completes was achieved. A total of 41,606 numbers were dialed.

Interviews were conducted from Sept. 19-Oct. 13, 2011. As many as 5 attempts were made to contact every sampled telephone number. Sample was released for interviewing in replicates, which are representative subsamples of the larger sample. Using replicates to control the release of sample ensures that complete call procedures are followed for the entire sample. Calls were staggered over times of day and days of the week to maximize the chance of making contact with potential respondents. Interviewing was spread as evenly as possible across the days in field. Each telephone number was called at least one time during the day in an attempt to complete an interview.

For each call, interviewers verified that that respondent was an adult 18 years or older. After confirming that the respondent has been using the phone number since at least January 2010, interviewers then asked the person on the phone if they would be willing to participate in a 15 minute survey.

Table 1 reports the disposition of all sampled telephone numbers ever dialed from the original telephone number samples. The response rate estimates the fraction of all eligible respondents in the sample that were ultimately interviewed. At PSRAI it is calculated by taking the product of three component rates:

Thus the response rate for the sample was 7 percent. 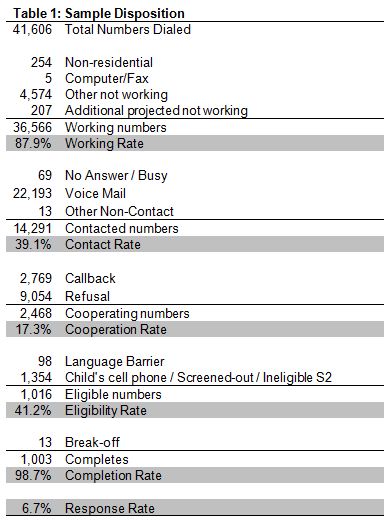