Teens are bigger users of text messaging than adults

Conventional wisdom suggests that teens are more enthusiastic users of the cell phone than adults. In practice, teens ages 12 to 17 are indeed more intense users of text messaging than older cell phone users, while they use voice calling in similar manner to adults. 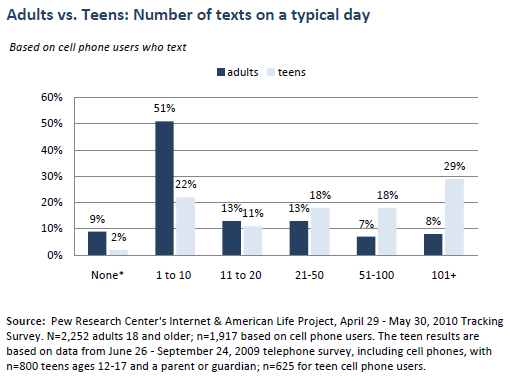 While more than half of all adults with cell phones who text send 1 to 10 text messages a day, just one fifth (22%) of teens send that many messages each day. Even though discrepancies remain between the age groups, adults have seen substantial increases in texting over the past months. Today, the median number of texts sent by adult texters is 10, up from 5 in September 2009. Looked at through a different statistical lens, the mean number of texts sent by adults as of May 2010 is 39.1 up from 29.7 in September 2009.

Teens also differ from adults in some of the purposes behind cell phone usage choices, particularly text messaging. More than half of teen texters (51%) text several times a day “just to say hello and chat” while only about a third (34%) of adults who text send “hello and chat” messages with that frequency.

Teens and adults are just as likely to have received unwanted to spam text messages, with 57% of adult and 54% of teen cell phone users receiving spam texts.

Adults and teens are much more alike in their use of voice calling from a mobile phone than their text messaging behavior might suggest. The largest segment of each group – 58% of teens and 44% of adults – make and receive 1 to 5 mobile phone calls a day.  However, cell-owning adults are more likely than teens to initiate and receive more than 20 calls a day, with 12% of adults making that many calls, compared with just 6% of teens. Consistent with these findings, teens and adults make and receive a median of 5 calls a day, while the mean number of teen calls is 10.7 and the mean for adults is 13.1. 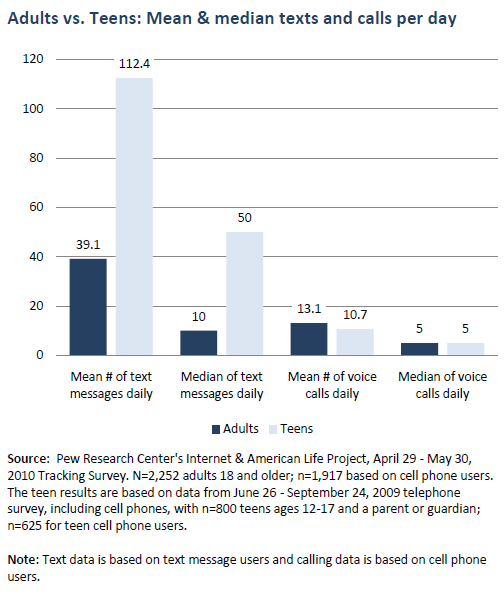 Overall, adults and teens are just as likely to have used their mobile phone to call someone just to say hello and chat, though adults are a bit more likely to do this more frequently, with 26% of cell-owning adults calling to say hello several times a day, compared with 18% of teens with cell phones.  Adults and teens show similar calling patterns when they use the phone to have long conversations on personal topics and when they use their cell phone to coordinate an in-person meeting.

Teens are more likely to use the phone to call and report where they are or check someone else’s location; 90% of teens have done so as have 81% of adults. Teens are also more likely to use the phone for school work than adults are to use their phone for professional work. However, of those adults that do use their phone to make and receive calls for work, they use it for that purpose more frequently than teens use their handsets for school.

Teens and adults agree that phones keep them safe and occasionally annoy, but teens are more likely to fight boredom with their phone.

For the most part, teens and adults share similar attitudes towards their cell phones. Both adults and teens nearly unanimously state (91% of adults and 93% of teens) that their cell phone makes them feel safer because they can always use it to get help.  Teens and adults are also just as likely to say that they feel irritated when a call or text on their phone interrupts them – with 42% of adults and 48% of teens expressing irritation. 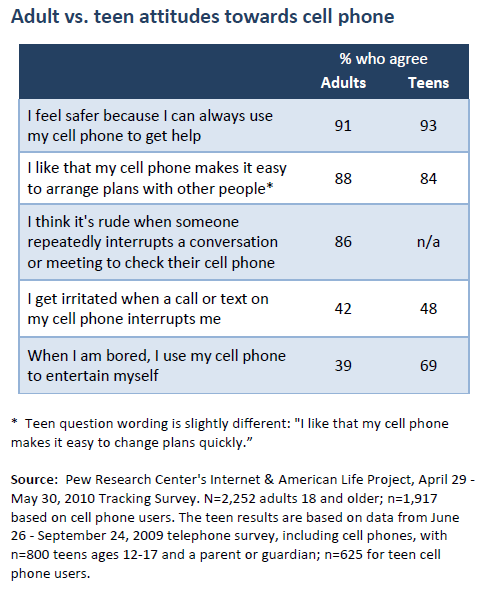 The one place where teens and adults diverge is over attitudes towards the phone as a stop gap entertainment platform for fighting boredom. Just about 2 in 5 adults (39%) say they use their cell phone to entertain themselves when they are bored. By contrast, nearly 7 in 10 teens with cell phones (69%) say they use their phone to beat back boredom.

Next: Methodology and Topline
← Prev Page
Page1Page2Page3You are reading page4Page5
Next Page →