Why adults call on cell phones

No longer just for communicating and planning while away from home or the workplace, the cell phone is increasingly a landline substitute. Recent research by the Pew Research Center suggests that 23% of Americans have only a cell phone available for making calls4 and another 17% have a landline but receive most of their calls on their mobile phone. For some subgroups, the findings are even more dramatic; nearly one-third (30%) of Hispanics and 49% of adults 25-29 are cell-only.5 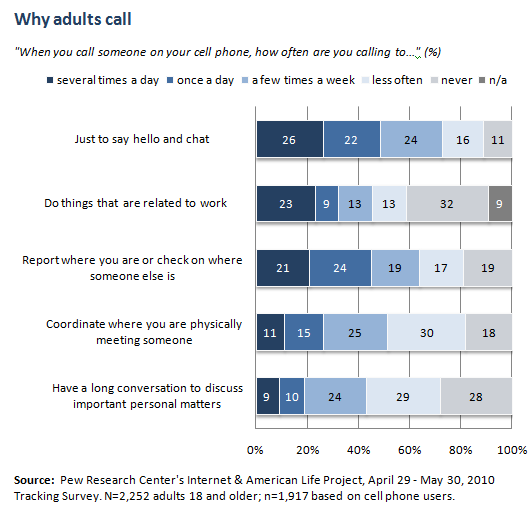 Men and women differ in the frequency with which they make different types of calls. Women are slightly more likely to place frequent calls to just say hello and chat and to report on where they are or find out where someone else is. Men are more likely to place frequent calls about coordinating where to meet others, and to make and receive calls about work. Men and women are just as likely to have long conversations to discuss important personal matters on their cell phone, though overall this is a low frequency activity for both men and women.

Adults ages 50 and under with cell phones are more likely to use their mobile phone to make voice calls for all purposes. The youngest users are generally the most likely to say that they make calls just to chat, to check in, to monitor or share their location, or to have long personal conversations. Work-related conversations on a cell phone are fairly equally shared by age, until retirement age, when the likelihood of making these types of calls declines substantially.

African-Americans and English-speaking Hispanics are also more likely to use the cell phone for all types of conversations more frequently than their white counterparts. The one exception is calls about work, where there are no differences by race or ethnicity.

Parents are also substantial users of voice calling for all reasons when compared with non-parents. They are more likely to use their cell phone several times a day for work calls, to coordinate a physical meeting, to check in with someone, to say hello and chat and to have long personal conversations.

Similar to voice calling, adults most often use text messaging to “just say hello and chat” with others. More than 4 in 5 (84%) text messaging adults send and receive texts just to say hello, and nearly half (49%) send these types of messages every day or more often. Text messaging adults are nearly as likely to use texts to report their location or check on someone else’s location as they are to say hello, with 79% of texters doing so, and nearly 2 in 5 (39%) saying they text to check in daily or more often.

Using texts to coordinate where you are meeting someone is another popular use of text messaging by adults, with three quarters (76%) of texters using texts for this purpose. But coordinating a physical meeting with someone is not done as frequently as checking in or saying hello – only a little more than a quarter (27%) of texters coordinate a meeting at least once a day or more often, and another quarter (24%) say they never do so via text message.

Sending and receiving text messages has one particular advantage over voice calling – with the proper phone settings engaged, text messages can transfer information silently between two or more people. Two thirds of texters (65%) say they take advantage of the ability to silently create and send text messages. A little less than a quarter (23%) of texters say they do this daily or more often, while another third (34%) say they never send messages under these circumstances. 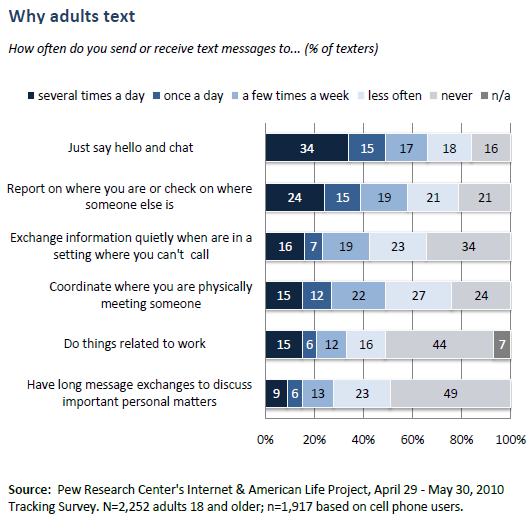 African Americans who send and receive text messages are more likely than their white counterparts to text several times a day for every reason queried in the survey. African Americans are more likely than whites to say they text several times a day just to say hello and chat, to check in on someone or report their own whereabouts, to coordinate meeting someone, to do things related to work, to exchange information quietly and to have long exchanges on important personal matters. In a similar vein young adults who text are more likely than older adults to text frequently for all the reasons probed, with the very youngest adults (18-24) the most likely to report these behaviors, except for texting about work and long exchanges. Lower income and lower education texters are more likely than those with higher incomes or education levels to text for social reasons – to say hello, to check in and to have long personal exchanges on important issues. 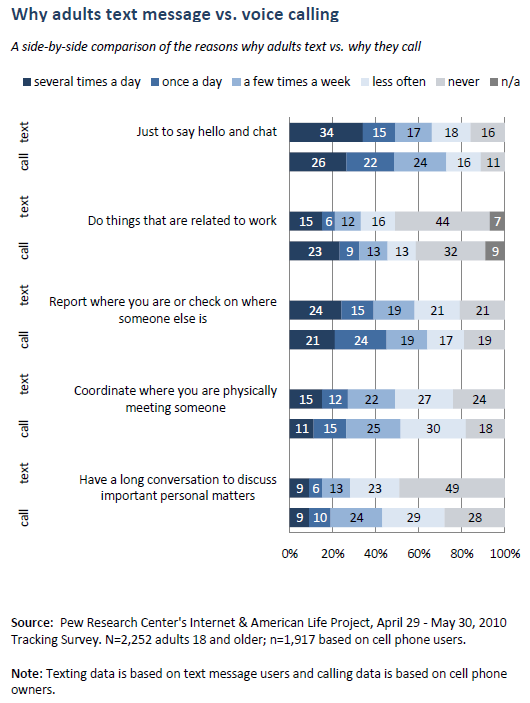 Where a person lives also relates to the frequency with which they use text messaging for different purposes. Texters who live in urban areas are more likely than suburbanites to say they report on where they are or check in with someone else by text, coordinate physically meeting someone, exchange messages quietly and have long exchanges of texts on important personal issues. Rural dwellers are more likely than suburbanites to use text messaging to say hello and chat.

Texting on your cell phone as an internet replacement?