As of May 2010, 59% of all adult Americans go online wirelessly. Our definition of a wireless internet user includes the following activities:

Taken together, 59% of American adults now go online wirelessly using either a laptop or cell phone, an increase over the 51% of Americans who did so at a similar point in 2009.[1]

Cell phone ownership has remained stable over the last year, but users are taking advantage of a much wider range of their phones’ capabilities compared with a similar point in 2009. Of the eight mobile data applications we asked about in both 2009 and 2010, all showed statistically significant year-to-year growth. 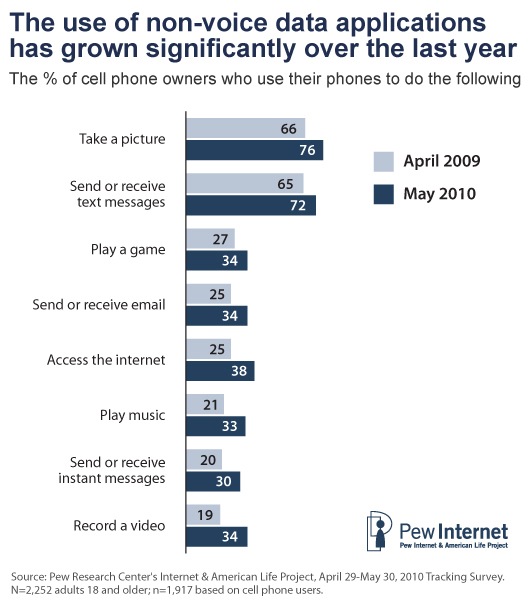 This year we also asked for the first time about seven additional cell phone activities. Among all cell phone owners:

African-Americans and Latinos continue to outpace whites in their use of data applications on handheld devices.

Continuing a trend we first identified in 2009, minority Americans lead the way when it comes to mobile access—especially mobile access using handheld devices. Nearly two-thirds of African-Americans (64%) and Latinos (63%) are wireless internet users, and minority Americans are significantly more likely to own a cell phone than their white counterparts (87% of blacks and Hispanics own a cell phone, compared with 80% of whites).  Additionally, black and Latino cell phone owners take advantage of a much wider array of their phones’ data functions compared to white cell phone owners. It is important to note that our data for Hispanics represents English-speaking Hispanics only, as our survey did not provide a Spanish-language option. 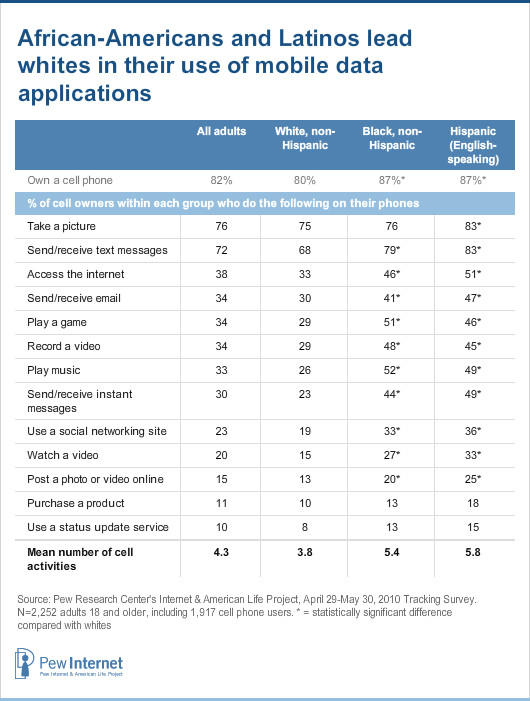 Young adults are heavily invested in the mobile web, although 30-49 year olds are gaining ground.

Nine in ten 18-29 year olds own a cell phone, and these young cell owners are significantly more likely than those in other age groups to engage in all of the mobile data applications we asked about in our survey. Among 18-29 year old cell phone owners:

This report is based on the findings of a daily tracking survey on Americans’ use of the Internet. The results in this report are based on data from telephone interviews conducted by Princeton Survey Research Associates International between April 29 and May 30, 2010, among a sample of 2,252 adults ages 18 and older, including 744 reached on a cell phone.  Interviews were conducted in English.  For results based on the total sample, one can say with 95% confidence that the error attributable to sampling and other random effects is plus or minus 2.4 percentage points.  For results based cell phone owners (n=1,917), the margin of sampling error is plus or minus 2.7 percentage points.  In addition to sampling error, question wording and practical difficulties in conducting telephone surveys may introduce some error or bias into the findings of opinion polls.

Data about sending photos or videos to others using a cell phone and texting charitable donations are based on telephone interviews with a nationally representative sample of 1,009 adults living in the continental United States. Telephone interviews were conducted by landline (678) and cell phone (331, including 104 without a landline phone). The survey was conducted by Princeton Survey Research International (PSRAI). Interviews were done in English by Princeton Data Source from June 17-20, 2010. Statistical results are weighted to correct known demographic discrepancies. The margin of sampling error for the complete set of weighted data is ±3.7 percentage points.

[1] Because of changes in question wordings over time, our current wireless internet user definition is not directly comparable to any pre-2009 findings.

Next: Part One: The current state of wireless internet use
← Prev Page
You are reading page1Page2Page3Page4Page5
Next Page →

Mobile Access to Data and Information
Generations 2010
Wireless Internet Use
Twitter and status updating
Biden Begins Presidency With Positive Ratings; Trump Departs With Lowest-Ever Job Mark
Defining generations: Where Millennials end and Generation Z begins
Five facts about the QAnon conspiracy theories
What Biden and Trump voters say they want the other candidate’s supporters to know about them
What the 2020 electorate looks like by party, race and ethnicity, age, education and religion