Nearly as many Americans now own laptops as own desktops, and just under half of all adults use a laptop to go online wirelessly 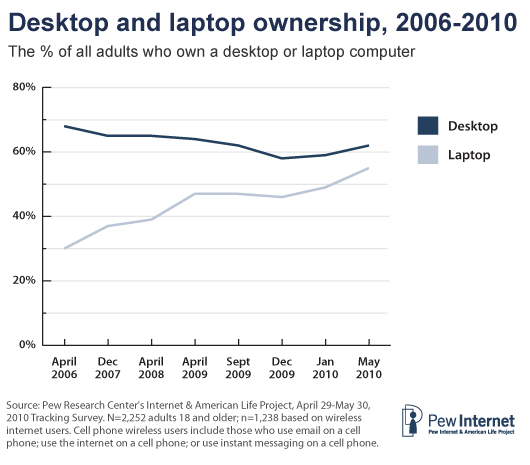 Not all laptop owners use their laptops to go online wirelessly, although the vast majority (86%) do so, using either a wi-fi or mobile broadband connection. That works out to 47% of all adults who use a laptop to connect wirelessly to the internet. Both of these represent a statistically significant increase from what we found at a similar point in 2009. At that time, 82% of laptop owners (representing 39% of all adults) went online wirelessly using a laptop computer.

Laptop ownership and mobile usage is most concentrated among the college educated, those younger than age 50 and those earning $50,000 or more per year. There are no major differences when it comes to race or ethnicity—blacks and English-speaking Hispanics are just as likely as whites to own a laptop, and to access the internet on a laptop using a wireless connection. Notably, laptop ownership and usage among African Americans has grown significantly since 2009; half (51%) of all black adults now own a laptop computer, up from the 34% who said this in our April 2009 survey. 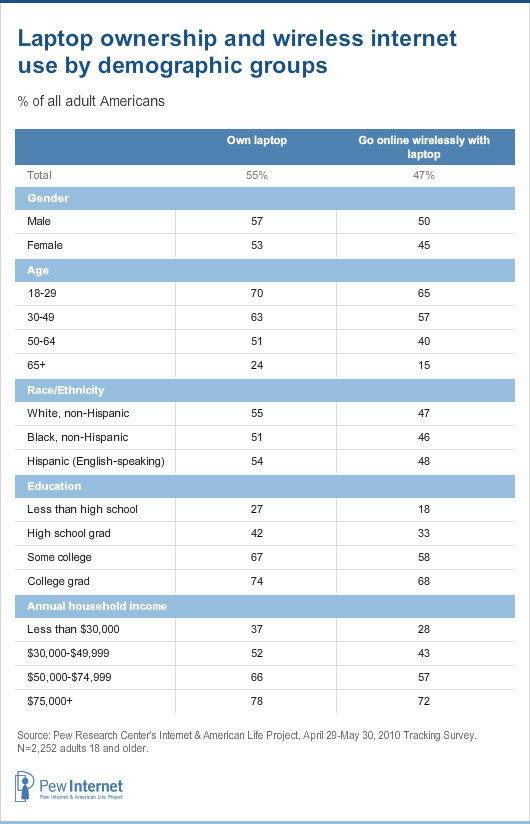 Laptop owners utilize the portable nature and wireless capabilities of these devices to go online from a range of locations. Among those who use their laptop to go online wirelessly (using either a wi-fi or mobile broadband card) 86% do so at home, 37% do so at work, and 54% do so someplace other than home or work.  Six in ten wireless laptop users (61%) go online from more than one of these locations, with two in five (20%) using their laptop to access the internet from all three locations (home, work and somewhere else).

Overall, there are relatively few demographic differences among laptop owners when it comes to where they use their devices to access the internet. The primary differences relate to access at work. Among wireless laptop users:

Mp3 players – Nearly half of all American adults (46%) own an mp3 player, and 16% of them use their handheld music players to go online. Not surprisingly, mp3 player ownership is strongly correlated with age: three-quarters (73%) of 18-29 year olds own this type of device, compared with 56% of 30-49 year olds, 33% of 50-64 year olds and just 7% of those ages 65 and older. Among mp3 player owners, men are slightly more likely than women to use their device to go online (19% vs. 14%), while internet use is also relatively high among 18-29 year olds (22% of mp3 owners in this age group use their player to access the internet).

E-book readers – 4% of Americans own an e-book reader like a Kindle, and nearly half (46%) of these owners use their electronic book reader to access the internet. At the moment e-book readers are largely a luxury item owned primarily by the well-off and well-educated, as one in ten college graduates (9%) and 8% of those with an annual household income of $75,000 or more per year own an electronic book reader. The number of individuals in our survey who go online using e-book readers is too small for detailed demographic comparisons of internet use on this device.

Game consoles – 42% of Americans own a game console like an Xbox or Play Station, and 29% of console owners use their gaming device to access the internet.8 Young adults are more likely than average to own a game console (62% of 18-29 year olds do so) as are parents (67%) and those ages 30-49 (56%). Although men and women are equally likely to own a gaming console, men are much more likely to use them to go online (38% of male console owners do so, compared with 20% of women). Additionally, nearly half of console owners ages 18-29 (45%) use their gaming to device to access the internet.

Tablet computers – This year for the first time we asked our respondents whether they owned a tablet PC such as an iPad, and 3% said that they do. Roughly six in ten of these individuals use their device to access the internet, although given the small number of tablet owners these findings are not reported in detail here.