Ambivalent Networkers: 7% of the general population

Ambivalent Networkers have folded ICTs into a lifestyle that relies a lot on mobile devices to connect socially with others or to entertain themselves. They do the most of any group when it comes to non-voice data applications on their cell phones and connect often wirelessly when they are not at home or work. Ambivalent Networkers are into social networking sites and are infrequent television watchers. When they do sample traditional media – radio or TV – it is likely to be done using a newfangled device such as a laptop or MP3 player.

Yet, perhaps because ICTs are so integrated into their lives and because of their youth, this group does not herald the upside of ICTs at a very high rate. Though well-equipped for mobile connectivity, Ambivalent Networkers are not enthralled by the intrusions this connectivity may create. Ambivalent Networkers like how gadgets let them stay up socially with others, but do not see them as central to their productivity.

This group has more ICT gadgets and services than average, with a tilt toward devices that can be taken on the go. Just about all (99%) have cell phones, and two-thirds have laptop computers (65%) and MP3 players (64%). Many use web cameras on their computers (24%) and most (74%) have digital cameras. A strong majority (85%) have broadband internet connections at home. The typical member of this group has been online for 9 years, just behind the average of 10 for all internet users.

Ambivalent Networkers have steady online habits, but are very active when it comes to using their cell phones for a range of things beyond making phone calls. Some 44% of this group go online at least several times a day, a bit above the 36% average and probably indicative more of their high rate of broadband adoption than anything else. They click over to YouTube while online (35% watch a video online on a typical day, just more than twice the average) and half get news online on the average day, compared with the 37% average for all online users. 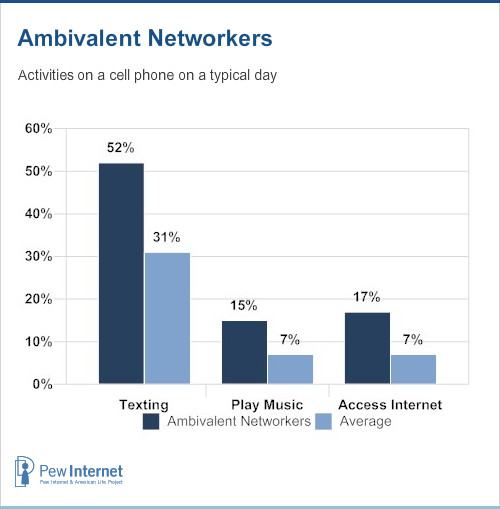 With their online behavior and very active cell phone use, traditional media is pushed aside for many in this group. Only 24% of Ambivalent Networkers say they watch television every day, far behind the national average for adults of 79%. When they do watch TV, they may not use a television set; some 48% in this group have watched TV programming on a non-TV device, more than twice the average.

Since half (49%) of this group has logged onto the internet wirelessly while away from home or work, it is not hard to picture a Ambivalent Networker in a café, laptop open, taking advantage of a free wireless connection, and watching a YouTube video. Perhaps, since 91% of this group rely on their cell phones for all their calls, they would be chatting on the phone and sharing the fun in the YouTube clip with a friend.

For Ambivalent Networkers, their online and mobile activities are a platform for social networking and sharing content with others. Some 54% of Ambivalent Networkers say they have a profile at a social networking site (SNS), the highest of any group, and well above the average of 33% for internet users in this sample. One-third (31%) in this group share digital content with others, and 29% post comments on websites. Both figures are above average and trail only Digital Collaborators as a group. Many in this group have their own blog (25%), which is twice the average for internet users and roughly the same as Digital Collaborators.

Ambivalent Networkers see ICTs as a convenient tool for connectivity with other people, but this does not translate into expressions of heavy reliance on the various gadgets and services they have. Members of this group strongly agree that ICTs are a great way to stay in touch with family and friends; 84% say this, trailing only Digital Collaborators in the typology and above the 65% average for the sample. Two-thirds of this group (66%) strongly agree that ICTs help them learn new things, above the average of 52%.

Yet members of this group are not particularly enamored of how ICTs make them more available to others; 31% agree strongly that they like this extra ICT-enabled availability, below the sample’s average of 47% and near the bottom for all groups. And a majority (52%) of Ambivalent Networkers says it is good to take a break from using the internet (ten percentage points above average), and just one-quarter (25%) say they would find it hard to get the information they need without their gadgets. That figure is about average (which is 27% for all gadget users), but the lowest among any of the tech-oriented groups.

Ambivalent Networkers also do not strongly associate gadgets with productivity – either personally or on the job. Some 38% agree that ICTs help them be more productive and 47% say it helps a great deal with their jobs. Although these figures are bit higher than the average, they are lower than those registered for several other tech-oriented groups. 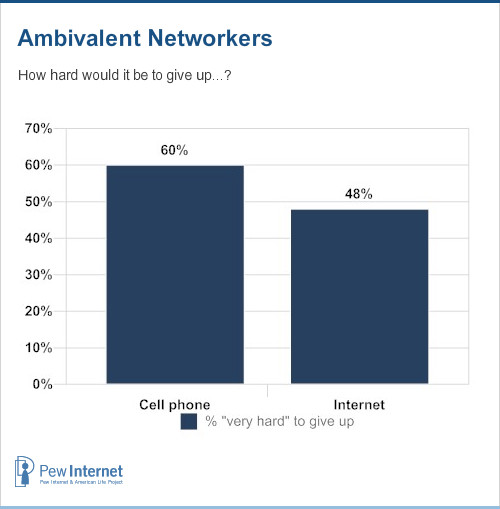 In spite of these sometimes tepid attitudes toward ICTs, Ambivalent Networkers feel strongly about their cell phones. Some 60% say they would find it very hard to do without their cell phone; by contrast just 9% say they would find it very difficult to give up their landline phone. Given that 91% of Ambivalent Networkers make most of their calls on their cell phones, this gap is not a surprise. The internet is the next toughest thing for this group to give up; 48% say it would be very hard to be without the internet, a figure that is on par with the entire sample. As noted, this group is not heavily into television viewing, and just one-third (32%) say it would be very difficult to give up their TV, which trails the 43% average.

This is the youngest of any of the typology’s groups; the median age is 29 and half of Ambivalent Networkers are adults under the age of 30. Its youth means many in this group are students (30%), and although 26% have college degrees, another 37% have had some college experience. The group has the fewest white Americans of any in the typology (67% versus 75% for the entire sample), and 11% are blacks, while 14% are English-speaking Hispanics.

This group has the smallest share of rural Americans of any in the typology (just 10%, about half the national average), and 64% are employed full-time (against the 52% average among the sample of adults). It is heavily male, with 60% men in the group.