The internet plays an important role in keeping in touch with loved ones both near and far.

Adults of all ages see the internet as an important tool for maintaining connections with family members, but young people are far more likely than older adults to go online in order to keep in touch with existing friends and make new contacts.6

As early and avid adopters of social networking, instant messaging and other social media applications, the internet is a key tool for young people to communicate, meet new friends and keep in touch with old ones:

The internet has led to more time working from both the home and office.

Despite the large number of people who now work from home, the blurring of work and family life has surprisingly few quantifiable effects with respect to the ways workers spend their private time. Individuals who work at home at least occasionally and those who are employed but do not work from home are similar in terms of their satisfaction with their time for family, friends and hobbies; the amount of time they spend with other household members; their tendency to socialize with others; and the perceived closeness of their family.

Roughly nine in ten internet users say that the time they spend online has had no impact on the amount of time they spend with friends, family, or at social events. These responses are almost unchanged since the last time we asked these questions in early 2001, despite the wide array of new online applications developed since then (and with the caveat that the online population is now much larger than in 2001). 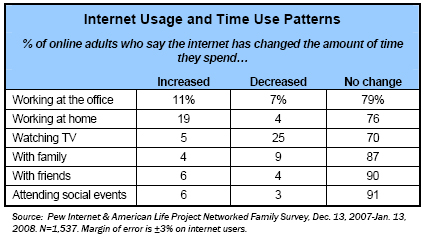 Cell phones and the internet are seen as positive tools for improving the quality of communications with family members, particularly those who live elsewhere.

Most adults consider their family today to be as close, or closer, than the family they grew up in as children thanks to the internet and cell phones.

Younger Americans, having spent much of their teens and early adulthood in a world of cell phones and internet access, tend to see little difference in the closeness of their current and childhood families. Two-thirds of 18-29 year olds and 62% of 30-49 year olds say that the internet and cell phones have not made much difference in how close their family is now compared with the one they grew up in. This drops to 55% for individuals age 65 or older.

Next: Conclusions: The networked household
← Prev Page
Page1Page2Page3Page4Page5Page6You are reading page7Page8Page9Page10
Next Page →