Married couples use a variety of tools to manage their schedules and stay connected.

Today’s married couples use a variety of tools—landline phones, cell phones, instant messaging, and email—to manage their schedules and stay connected with each other throughout the day. The adoption of cell phones is a particularly important component of the way today’s families stay in touch and coordinate their lives together.

The telephone – and the cell phone in particular – is the tool of choice for communication between spouses. Couples use the internet and cell phones to facilitate the personal interactions and routines of daily life.

Married couples use a wide range of technologies to communicate. Most of all, the telephone—especially the cell phone—is the tool of choice for couples to keep connected. One in five married adults (21%) say they contact their spouse several times a day using a cell phone, and an additional 26% do so at least once a day. In other words, 47% of married adults contact their spouse daily by cell phone, as compared with 35% who communicate daily by landline telephone.

Married couples use new communication technologies such as the internet and cell phones primarily to facilitate scheduling and to simply stay connected throughout the day. Compared with less tech-heavy couples, couples in which both spouses go online or own cell phones are significantly more likely to contact each other daily to say hello and chat, as well as to coordinate schedules and routines.

However, new communication technologies do not seem to play an especially important role in planning future events or discussing important matters. Couples using cell phones or the internet are no more likely to discuss these matters daily than those who do not use these technologies. These discussions are most likely taking place in-person or using traditional landline phones. 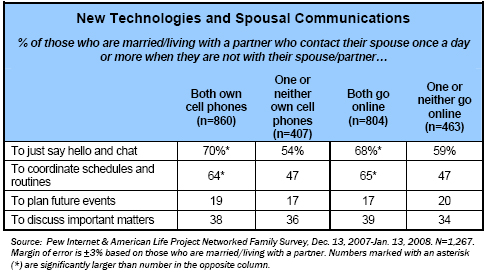 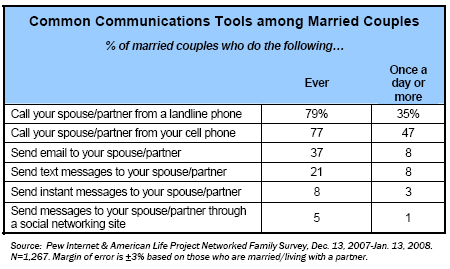 Parents rely on the telephone to keep in touch with children as well as spouses.

In addition to staying connected with one another throughout the day, couples also use communication technologies to stay connected with their children. As with adult-to-adult communications, cell phones and landline telephones are the primary technologies parents use to keep in touch with their children over the course of the day. Two in five parents (42%) with a child aged 7-17 call their child from a cell phone once a day or more, and 35% do so from a landline telephone. By contrast, only 7% send daily text messages to their child, and just 1% send instant messages or messages on social networking sites on a daily basis. 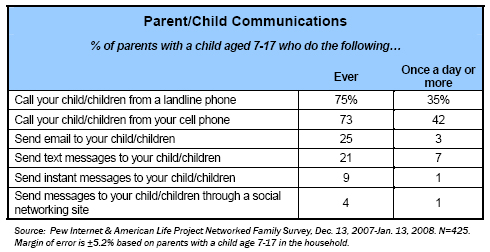 Most women and men share the job of staying in touch with friends and family, but in some families women are still the primary kin-keepers.

Past research has indicated that women often take a leading role in managing household communications, using the internet and other communications technologies to reinforce existing personal relationships and to cultivate relationships with their family and friends (Wellman 1985).

Next: The internet, cell phones, and family communication
← Prev Page
Page1Page2Page3Page4Page5You are reading page6Page7Page8Page9Page10
Next Page →