Americans focus on family time and work time, often limiting the time they have available for leisure and other activities.

Our survey found that Americans try to balance work, family and leisure activities:  for most, family time has the highest priority. A majority (55%) of all Americans reported that they are “very satisfied” with the amount of time they spend with their immediate families. Only 14% are not satisfied. 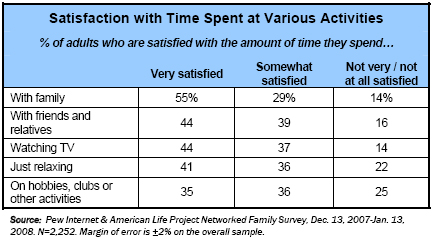 Married couples are generally satisfied with the amount of time they are able to spend with family members, despite the growth in dual-income households and corresponding increase in time spent working. In all, 89% of married couples (which includes those with and without children) are “very” or “somewhat” satisfied with the amount of time they spend with family, compared with 79% of adults in non-married households.

Being employed (whether full- or part-time) is highly associated with the level of a person’s satisfaction with his or her leisure pursuits. Those who are employed are less satisfied with the time they have available to spend with family, friends/relatives, engaging in hobbies or other activities, or just relaxing. 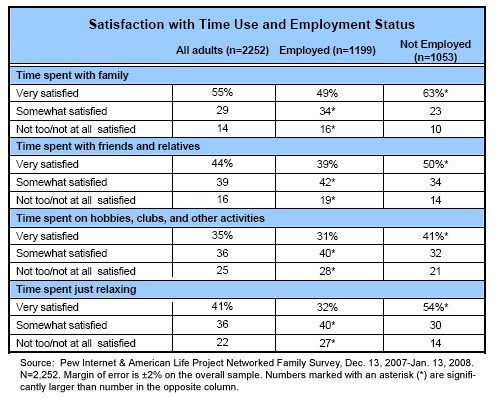 Most spouses and parents/children frequently eat dinner together. 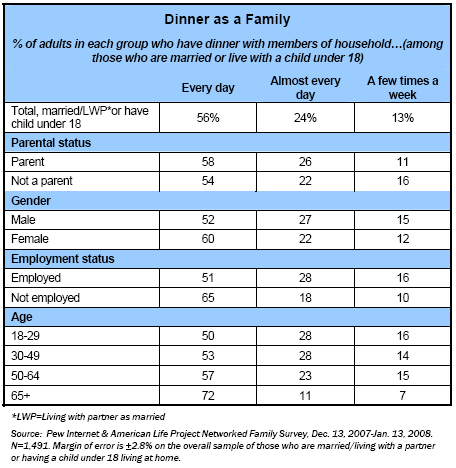 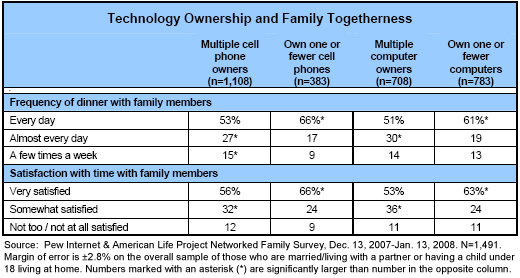 Television watching, though still a common household activity, has a greatly reduced importance among young adults.

While the relatively small number of 18-29 year olds in our survey (and the extremely high rates of internet usage within this group) prevents a robust comparison of TV watching by young internet users and non-users, it is likely that internet use is a big part of the explanation of why young adults are the least likely to watch TV. Fully 85% of 18-29 year olds go online, 39% of young internet users go online from home multiple times throughout the day, and 29% say that they watch less TV as a result of the internet.

The act of watching TV is a social one for many viewers.

Among those who watch TV, more than half (52%) usually do so socially—with other people. This is particularly true for those living in multi-person households, 63% of whom usually watch TV with others. Not surprisingly, solitary TV viewing is especially prevalent in the context of single-person households: 86% of those who live alone and watch TV usually do so by themselves.

Notably, there is little relationship between the number of TVs in the household and whether or not individuals usually watch TV alone or with others. Two-thirds (65%) of adults from multi-person households with 1-2 TVs say they usually watch television with other people; this differs little from households with 3-4 TVs (61%) or those with five or more TVs (64%). Even in households where individuals have the ability to watch television alone, family members often choose to gather around the TV with family members.

Many families go online together.

People lean back in their easy chairs to passively watch a TV screen that is several yards away. It is easy for others to watch with them. By contrast, people lean forward in their desk chairs to actively interact with a computer screen that is only a foot or two away. The common mode of engagement is one person at one computer. Hence, the internet has more of a potential than TV to be a solitary activity, isolating household members from one another.

Nevertheless, many internet-using adults spend appreciable time at the computer with household members. Among home internet users who live with a spouse and child/children, 13% go online with another person on a daily basis, 9% do so almost every day, and 30% do so a few times a week. Another one-third (34%) do so less often. Thus, nearly nine in ten (87%) home internet users in married with children households go online with another person in the home at least occasionally.

As with TV, the presence of multiple computers in the household does not necessarily lead family members to be in their own isolated technological corners. Indeed, married with children households with multiple computers have as much (if not more) shared time online with others than single-computer households. We surmise that household members often look over each other’s shoulders to see what interesting things are on the other’s screen. 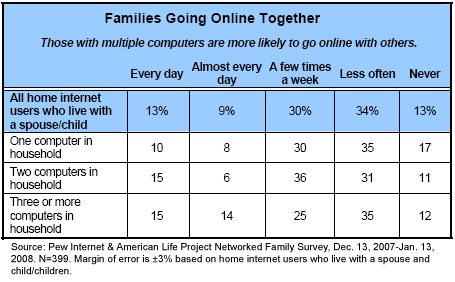 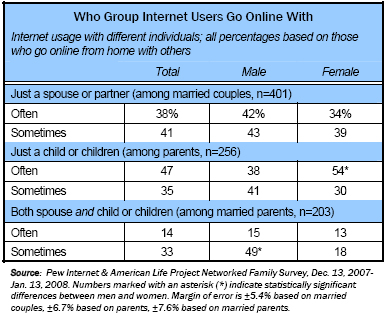 Socializing with others is a common activity, particularly among young adults. 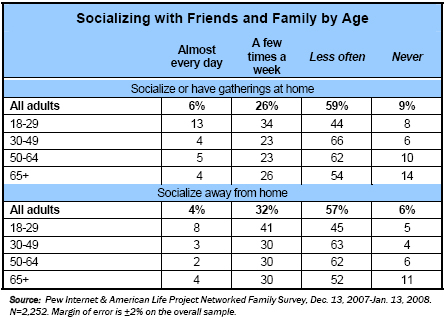 Men are more likely to socialize with their wives present. 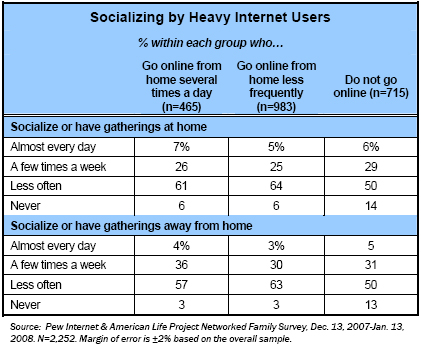 Networked Families Acknowledgments Introduction and previous research Household types and technology ownership
Family social activities and togetherness
Americans focus on family time and work time, often limiting the time they have available for leisure and other activities.Most spouses and parents/children frequently eat dinner together.Television watching, though still a common household activity, has a greatly reduced importance among young adults.The act of watching TV is a social one for many viewers.Men and women watch TV with different family members.Many families go online together.Men and women go online with different family members.Socializing with others is a common activity, particularly among young adults.Men are more likely to socialize with their wives present.Internet users socialize as often as non-internet users.
Spouses and children staying connected The internet, cell phones, and family communication Conclusions: The networked household Methodology References