Video gaming is so widespread among American teenagers that to paint a portrait of a typical teen gamer is to hold a mirror to the population of teens as whole. Nearly every teen plays games in some way, regardless of gender, age, or socioeconomic status. Opportunities for gaming abound, with teens owning multiple gaming devices themselves and playing games on devices owned by friends where they lack personal access. Not only is access to games ubiquitous, but game play is frequent, part of a typical daily experience for half of all teens. And if a teen is playing games on a particular day, he or she is likely to spend nearly an hour playing them. Understanding the nature of game play is vital to understanding how nearly every American teen spends at least a part of many of their days.

Virtually all teens play games. Half of teens who play games do so on any given day.

Nearly all American teens—97%—ages 12-17 play computer, web, console, or mobile games. Teens are also playing these games with relative frequency and duration. Nearly one-third (31%) of teen gamers play games every day, and another one in five (21%) play games three to five days a week.

Half of teens who play games do so on any given day. 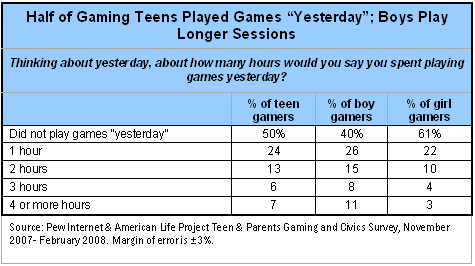 The stereotype that only boys play video games is far from true in 2008, as girls constitute a large (if not equal) percentage of total gamers: 99% of boys play games, as do 94% of girls. While almost all girls as well as almost all boys play video games, boys typically play games with greater frequency and duration than girls. Boys are significantly more likely to play games daily than girls, with 39% of boys reporting daily game play and 22% of girls reporting the same. Boys are also more likely than girls to play games on any given day (60% of boys did, compared with 39% of girls), and when boys do play, they’re playing for longer periods of time. Among teens who played games “yesterday,” boys and girls are just as likely to report that they played for an hour or less. Boys, however, are twice as likely to report playing for two hours or more each day, with 34% of boys playing for two hours or more per day; 18% of girls play games for that amount of time.

Younger teens are the most avid gamers.

The age of the teen is also an important variable in predicting game play frequency and duration, as well as the types of games played and experiences during game play. Unlike most other online or digital activities—where older teens are more likely to engage in an activity—older teens are less likely than younger teens to play games on a typical day. More than half (54%) of 12- to 14-year-olds played games yesterday, whereas 46% of 15- to 17-year-olds did so.

Broadband users are slightly more likely to play for longer periods of time than teens who reside in homes without broadband.

With the public debate about the potential positive and negative implications of game play as a backdrop, this report set out to unpack information about teens who play games frequently and who are thus exposed more often to the effects of video games. Who are these frequent gamers?31

More than three in ten (31%) teens say they play games on daily basis. Teens who game daily are largely boys—65% are male, 35% are female. These gamers also skew younger: 57% of those who play games every day are ages 12-14, and the remaining 43% of daily gamers are ages 15-17. Daily gamers are more likely to play on a portable gaming device (73% of daily gamers use a portable, compared with 57% of those who play less often), and are just as likely as other gamers to play on computers, consoles, or on a cell phone.

Traditionally, the image of a gamer is that of a loner who prefers spending his or her time playing video games over spending time with friends. Our survey refutes this stereotype, revealing that the most avid, frequent gamers are just as communicative and socially engaged as less-active gamers. The one exception is text messaging: daily gamers are somewhat less likely than those who play less often to send or receive text messages daily as a way of communicating with friends. Gamers do send texts, but are less likely to do so on a daily basis than those who game less often; 32% of daily gamers send text messages to their friends every day, while 41% of gamers who play less often text friends daily.

Beyond text messaging, however, daily gamers are just as likely as teens who game less frequently to use other methods to communicate with friends (landlines, cell phone, IM, email, and social network messaging) and to spend time with friends face–to-face. 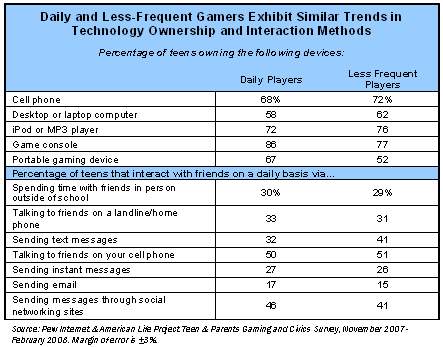 Teens, Video Games and Civics Acknowledgments Introduction
Part 1.1: Who Is Playing Games?
IntroductionVirtually all teens play games. Half of teens who play games do so on any given day.Almost all girls and boys play video games. Boys report playing games more often and for longer periods of time than girls.Younger teens are the most avid gamers.Broadband users are slightly more likely to play for longer periods of time than teens who reside in homes without broadband.The daily gamer: Young, male, and playing games onlineFrequent game players are not socially isolated.
Part 1.2: Basic Gaming Hardware and Games Played Part 1.3: The Social Nature of Teen Video Game Play Part 1.4: Parents and Games Part 2: Video Games' Relationship to Civic and Political Engagement Appendices Methodology