Video games provide a diverse set of experiences and related activities and are part of the lives of almost all teens in America. To date, most video game research has focused on how games impact academic and social outcomes (particularly aggression). There has also been some exploration of the relationship between games and civic outcomes, but as of yet there has been no large-scale quantitative research. This survey provides the first nationally representative study of teen video game play and of teen video gaming and civic engagement. The survey looks at which teens are playing games, the games and equipment they are using, the social context of their play, and the role of parents and parental monitoring. Though arguments have been made about the civic potential of video gaming, this is the first large-scale study to examine the relationship between specific gaming experiences and teens’ civic activities and commitments.

Video gaming is pervasive in the lives of American teens—young teens and older teens, girls and boys, and teens from across the socioeconomic spectrum. Opportunities for gaming are everywhere, and teens are playing video games frequently. When asked, half of all teens reported playing a video game “yesterday.” Those who play daily typically play for an hour or more.

Fully 99% of boys and 94% of girls play video games. Younger teen boys are the most likely to play games, followed by younger girls and older boys. Older girls are the least “enthusiastic” players of video games, though more than half of them play. Some 65% of daily gamers are male; 35% are female.

Most teens do not limit themselves to just a few game genres, instead choosing to play many different types of games. Daily gamers are more likely to play a wider range of game genres than non-daily gamers. 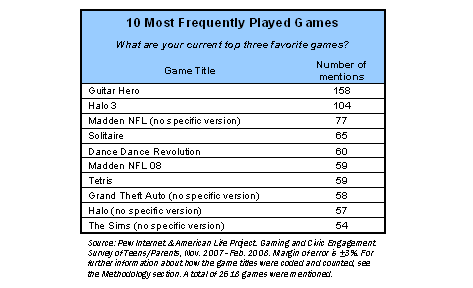 The most popular games played by teens today span a variety of genres and ratings.

The five most popular games among American teens are Guitar Hero, Halo 3, Madden NFL, Solitaire, and Dance Dance Revolution. These games include rhythm games (Guitar Hero and Dance Dance Revolution), puzzle/card games (Solitaire), sports games (Madden), and first-person shooter games (Halo). The ratings of these games range from E-rated “Everyone” games (Solitaire and Dance Dance Revolution), deemed suitable by the ratings board for players of all ages, to games rated Mature (M) for violence, blood and gore, and language (Halo). The range of genres spanned by the most popular games played by teens indicates they are not simply playing violent first-person shooters or action games. However, boys are more likely than girls to report playing these specific violent M-rated games. 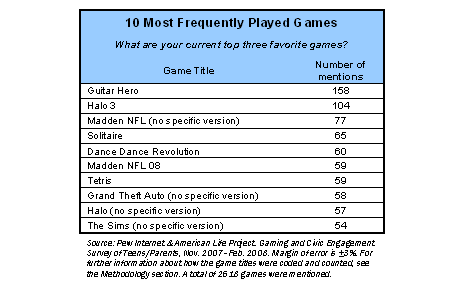 Gaming is often a social experience for teens.

And nearly 3 in 5 teens (59%) of teens play games in multiple ways—with others in the same room, with others online, or alone.

Close to half of teens who play online games do so with people they know in their offline lives.

Online gamers are more likely to report playing games mostly with people they know in their offline lives than with teens they met online. Of teens who play games online with others:

Teens encounter both pro-social and anti-social behavior while gaming.

As discussed above, games are often played with others. In multiplayer game play, different people control different characters in the game, and make individual choices about how to act and what to say in the context of the game. Nearly two-thirds (63%) of teens who play games report seeing or hearing “people being mean and overly aggressive while playing,” and 49% report seeing or hearing “people being hateful, racist, or sexist” while playing. However, among these teens, nearly three-quarters report that another player responded by asking the aggressor to stop at least some of the time. Furthermore, 85% of teens who report seeing these behaviors also report seeing other players being generous or helpful while playing. We found no relationship between parental monitoring and teens’ exposure to these experiences.

The most popular game genres include games with violent and nonviolent content.

The two most widely played game genres were racing and puzzle games, played by nearly three-quarters of teens in the sample. These genres are noteworthy because they have little to no violent content. However, two-thirds of teens reported playing “action” or “adventure” games, some of which contain considerable violent content.1 (See chart on page iii.)

While most parents engage in some form of monitoring, parents are more likely to monitor game play for boys and for younger children. Monitoring, as mentioned above, does not have an impact on whether or not teens are exposed to anti-social behavior or words in the gaming context. Among parents of gamers:

Parents of teens who play games are generally neutral on the effect of games on their children, with nearly two-thirds believing that games have no impact one way or the other on their offspring.

There are civic dimensions to video game play.

The quantity of game play is not strongly related to teens’ interest or engagement in civic and political activity.

Neither the frequency of game play nor the amount of time young people spend playing games is significantly related to most of the civic and political outcomes that we examined—following politics, persuading others how to vote, contributing to charities, volunteering, or staying informed about politics and current events. There is little evidence to support the concern that playing video games promotes behaviors or attitudes that undermine civic commitments and behaviors. At the same time, there is little evidence to support the idea that playing video games, in general, is associated with a vibrant civic or political life. The frequency of gaming was related to only two civic and political outcomes—political interest and protesting—with differences only emerging between the highest and lowest frequency of game play.

The characteristics of game play and the contexts in which teens play games are strongly related to teens’ interest and engagement in civic and political activities.

Playing games with others in person was related to civic and political outcomes, but playing with others online was not.

Among teens who play games with others in the room: 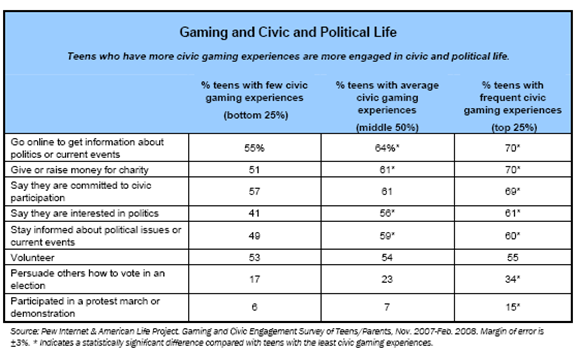 Teens who take part in social interaction related to the game, such as commenting on websites or contributing to discussion boards, are more engaged civically and politically.

Among teens who write or contribute to these game-related websites:

Civic gaming experiences are more equally distributed than many other civic learning opportunities.

Teens in this sample were equally likely to report having civic gaming experiences regardless of race, age, or income. Girls, who play a narrower band of games and spend less time gaming, were less likely to have these experiences. This stands in contrast to findings about the equality of access to civic learning experiences in high schools. Previous research has found that high school civic learning opportunities tend to be unequally distributed, with higher-income, higher-achieving, and white students experiencing more opportunities than their counterparts.2 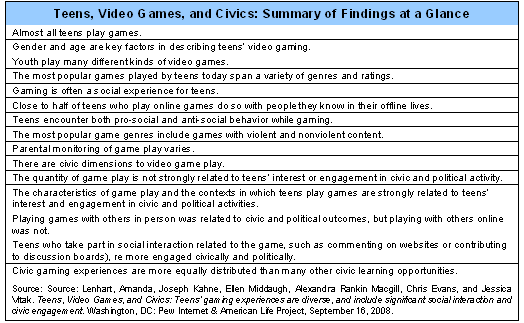