Technology suffuses the lives of teens. Almost all American adolescents use the internet, and those who go online tend to do so multiple times throughout the day. Moreover, technology is increasingly found in the classroom, and teachers and schools often expect students to have access and prior exposure to technology in addition to the training they receive in school.  In order to understand what it means to be a teenager today, one must understand the technological context of teens’ lives, and this chapter charts some baseline dimensions of teens’ technology ownership and use.

Nearly all teens use the internet.

The internet is fully entrenched in the lives of young people—94% of teens now go online to use the internet or email. While teen internet usage now approaches or exceeds 90% or more for nearly all demographic and socioeconomic categories, access is higher in some groups (such as whites and teens from higher-income families) than in others (such as Hispanics and those from lower-income households). 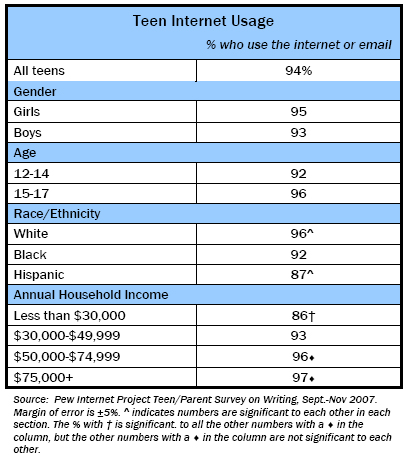 The location from which a teen uses the internet often determines the quality of his or her online experience. Factors that vary by location such as connection speed, hours of operation, and the presence of internet filters and other safety features often impact how long teens can spend online, which sites they can visit, and how easily they can access the technology. Among teenage internet users, 89% go online from home, 77% do so from school, 71% do so from a friend or relative’s house and 60% do so from a library. 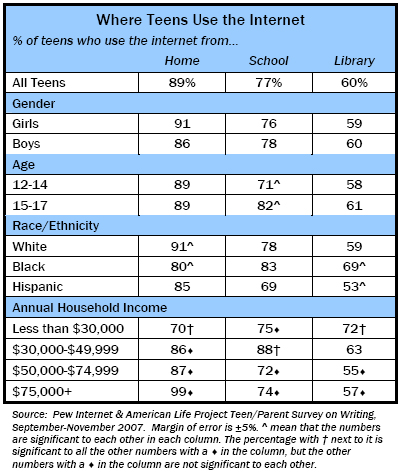 Similarly, one quarter of online black teens use the internet most often from school, while 63% get most of their internet access at home. In contrast, eight in ten white teens (81%) go online primarily from home and just 15% do so primarily from school. Age also plays a role in where teens go online, as older teens are more likely to go online from school or from a friend or relative’s house.

Our focus group participants indicated that where and how they use computers for their school work often depends on the requirements of their writing assignments as well as their access to technology:

Yes, at my school the library is open from like 6:45
till the bell rings in the morning and then after
school you can go in there for about an hour.
– 9/11th Grade Boy, Southwestern City.

A majority of teens have access to a broadband internet connection at home.

Previous research by the Pew Internet & American Life Project suggests that broadband internet access is qualitatively different from dial-up internet access, and fundamentally changes the way that the internet is used.13 High-speed, always-on internet access allows the internet to serve as a go-to resource for information, where large files and multimedia websites and content can be seamlessly enjoyed, shared and received. Conversely, dial-up access can limit the utility of even relatively simple online applications, as noted by one of our focus group participants:

I don’t use email too much either, just because my computer is slow. I have dial up.
– 11/12th Grade Boy, Northeastern City.

Two-thirds of teens (66%) live in households with high-speed internet access, although as with internet access in general home broadband access is highest among whites and teens from higher-income families: 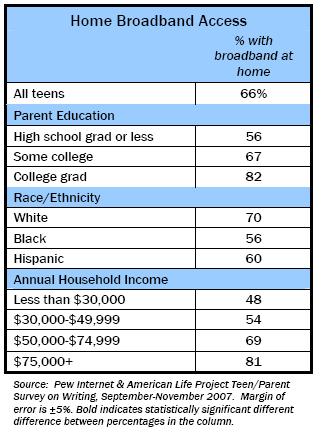 As highly interactive online activities such as blogging and social networking have grown in popularity, accessing the internet has become more and more a daily activity for teens—nearly two thirds of teenage internet users (63%) now go online daily, and more than a third (35%) of online teens use the internet multiple times per day.

Whites and teens from higher-income households go online more frequently than minority and lower-income teens. This may occur in part because these teens are less reliant on locations outside the home for internet access and because they are more likely to have broadband access at home. Two-thirds (67%) of white teens who go online do so daily (versus 53% for black teens), while three-quarters (75%) of online teens from high-income families go online daily (versus 39% of online teens living in households earning under $30,000 per year). Older teens also go online more frequently: 71% of online 15-17 year olds use the internet daily, compared with 54% of online teens ages 12-14.

Teen 1: I check [MySpace] like every day.
Teen 2: I check it like three times a day.
Teen 3: I check my Hotmail all the time.
– Exchange in 7/8th Grade Girls Group, Northeastern City.

Seven in ten teens now have a cell phone, and six in ten have a desktop or laptop computer.

Six in ten teens (59%) now have a desktop or laptop computer, but computers are not the only communicative technology at teens’ disposal. Cell phone use has grown rapidly among teens in recent years: 71% of teens currently have a cell phone, up from 45% in 2004 and 63% in 2006.  Overall, more than four in ten teens (45%) personally have both a computer and a cell phone with cell phone (81%) and computer (65%) ownership being particularly high among older teens. 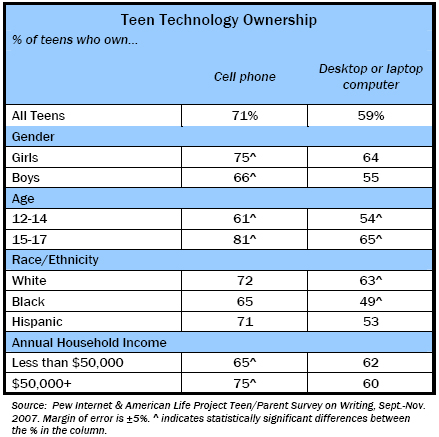 Teens put their cell phones and computers to a wide range of uses, from keeping track of friends and family to playing games or researching for school. While cell phone use is lowest among younger teens, many of our younger focus group participants had a cell phone that they used for safety purposes or for family communication only.

I also have to use my phone so one of [my parents] knows where I am at.
– 11/12th Grade Boy, Northeastern City.

Next: Teens and Their Writing Habits
← Prev Page
Page1Page2Page3You are reading page4Page5Page6Page7Page8Page9Page10
Next Page →

Writing, Technology and Teens Acknowledgments and Methodology Introduction
The Lives of Teens and Their Technology
IntroductionNearly all teens use the internet.Teens go online from a wide range of locations. Schools and libraries play important roles in teen internet access.A majority of teens have access to a broadband internet connection at home.Many teens go online daily.Seven in ten teens now have a cell phone, and six in ten have a desktop or laptop computer.
Teens and Their Writing Habits Electronic Communication The Relationship between Writing, Communication and Technology Ownership Parental Attitudes toward Writing and Technology The Way Teens See Their Writing and What Would Improve It What Teens Tell Us Encourages Them to Write