Americans are shoppers. On the typical day, Americans spend an average of 24 minutes purchasing goods and services – a figure that doesn’t include any time spent traveling to a place to shop.3 This is more than people spend relaxing and thinking (19 minutes per day on average) and about half the time people spend socializing and communicating with others (46 minutes).

Most Americans (72%) are undaunted by the choice of so many products in the marketplace, with just 19% feeling overwhelmed by it.

Our survey finds that most Americans (59%) find themselves shopping for things such as groceries at least a couple of times per week, while the remaining 41% shop about once a week or less often. And Americans are fairly evenly split as to whether or not shopping is a chore. Some 42% say they enjoy shopping while nearly half (48%) characterizing it as “just something they have to do.” Some people (22%) would shop more if they had more time for it and half (49%) of Americans would shop more if they had more money to spend. Close to one-third (29%) would do more shopping if there were more stores nearby.

This report presents a portrait of how many online users turn to the internet for research, browsing, and transacting, as well as people’s attitudes about shopping online. Although there is wide use and acceptance of the internet for shopping, worries about sending personal or credit card information online keeps some people – mainly low-income Americans – from doing transactions online.

Most internet users have done something online connected to buying products or researching things they may buy offline.

Online shopping has been a feature of online life since the late 1990s and has now become commonplace. Our September 2007 survey finds the following among internet users.

Overall, 93% of internet users have at one time done at least one of the above-listed activities relating to online commerce and purchasing, with 26% doing at least one on a typical online day (our “yesterday” readings).

The number of online users either buying or researching products online since 2000 has roughly doubled.

In our September 2007 survey, 66% of online users said they had bought something online, up from 46% of internet users had made a purchase using the internet in our June 2000 survey.

For doing research on a product, three quarters (73%) had done online research about products in June 2000, with 13% reporting they had done this on a typical day. That number grew to 81% in September 2007, with the number of people doing this on the average day growing to 20%. 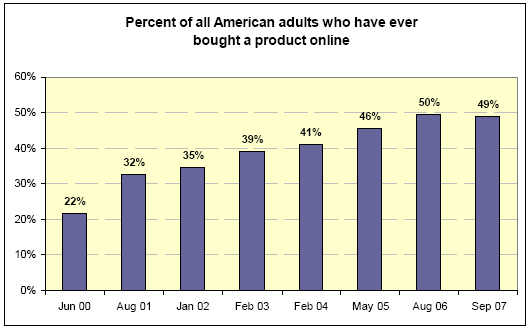 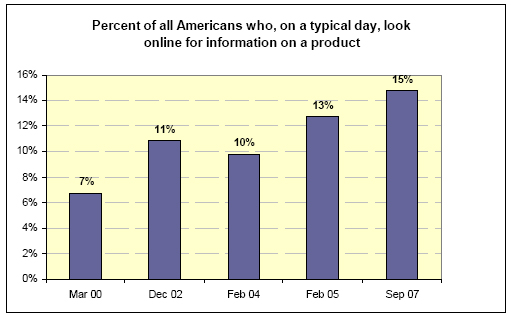 For travel information, nearly half of adult Americans have made a purchase of a travel service over the internet, significantly higher than was the case in the year 2000. 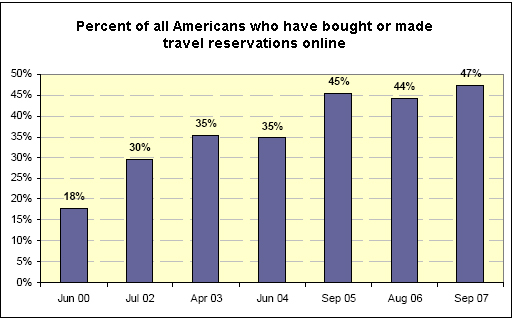 It is also worth noting that pace of change in the share of internet users having bought something online is very different from the rate of change in e-commerce revenues. As noted, the number of Americans who have bought something online has doubled since mid-2000. This has been fueled by the growth in the share of Americans who are online and, within the population of internet users, a higher percentage of users who have chosen to buy products online. E-commerce revenues, however, have grown by nearly fivefold (in comparisons of quarterly e-commerce sales) from $7.4 billion in mid-2000 to $34.7 billion in mid-2007.

As both trends in revenue and the share of online users engaging in e-commerce suggest, online commerce has reached a level of maturity in the United States. Some of this may be a reflection of trends in internet adoption and use. Internet adoption in the general population has remained steady at just above 70% according to recent Pew Internet Project surveys. Adoption of broadband internet connections at home has shown steady growth – today 50% of adults have high-speed at home – but the nature of the remaining non-broadband subscribers suggests that it will be hard to sustain the brisk broadband growth rates of recent years.5

It may also be the case that some consumers may be “experiencing internet fatigue and changing their buying habits” with less emphasis on online buying.6 It is also possible that the efforts of some firms to integrate online window shopping with offline purchasing play a role in this slowdown as well.

Rating and commenting on products

There is not a great deal of variation across age groups in this activity. Some 31% of online adults under 30 have posted a comment on a product, and 34% of internet users between the ages of 30 and 49 have done this. The 50-64 age group has 27% of internet users has done this, while 18% of online senior citizens have don this.

Although many Americans use the internet as a substitute for going to the store, some also purchase digital content over the internet. When asked whether they have ever paid to download digital content such as a newscast, sporting event, or a radio show, some 17% of internet users said they had done this.

Online adults under age 30 are more likely than other age groups to pay for content online.

Our September 2007 survey shows a jump in the number of online users who have done banking online to 53%, or 39% of all adult Americans. No doubt, the growth in the ease and number of online banking applications over the past several years has contributed to this growth, in addition to more acceptance of banking online from consumers. Here is how online banking breaks out by income group. 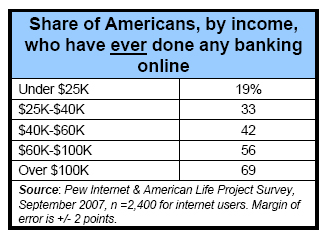 Online classified ads or sites such as Craig’s list

Not surprisingly, young adults are more likely to use online classifieds. 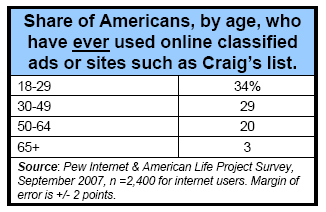 Next: Part 2. Online Shoppers: Who They Are and What They Think
← Prev Page
Page1Page2You are reading page3Page4Page5Page6Page7
Next Page →