American internet users have embraced online shopping because they say it is convenient and a time-saver.

Two-thirds (66%) of online Americans say they have purchased a product online, such as a book, toy, music, or clothing. Attitudes and perceptions play a key role in whether online users choose to purchase products online.

At the same time, most online Americans have high levels of concern about sending personal or credit card information over the internet.

While the number of e-shoppers continues to grow, there is still widespread concern in the internet population about the safety of financial and personal data online.

More than half of internet users encounter frustrations and other frictions in the course of online shopping.

This comes to 58% of internet users who have experienced at least one of these three feelings during online shopping.

More people would shop online if they trusted the e-commerce environment more.

Internet users’ attitudes about online shopping are not entirely consistent. They are willing to shop online because it is convenient and a time-saver, but they also do not like sending personal or credit card information over the internet. Our analysis suggests that if concerns about the safety of the online shopping environment were eased and if shoppers felt that online shopping saved them time and was convenient, the number of online shoppers would be higher.

It is possible to sort through these different attitudes to see what matter more in influencing people’s propensities to shop online.1 Using as the baseline internet users’ response to the question about whether they have ever bought a product such as a book, music, toy or clothing online, the analysis asks what would happen to levels of online shopping if certain attitudes were different. We find that concerns about sending personal or credit card information online loom largest in influencing whether to shop online. Specifically:

The estimates above are independent effects, showing the impact when the other factors noted above, as well as other demographic and socio-economic impacts are held constant. In fact, demographic factors such as race or gender have no significant impact on predicting levels of online shopping, and the impact of income is small; if low-income Americans suddenly had at least average incomes the incidence of online shopping would be one percentage point higher.

Finally, higher broadband deployment would also drive up the size of the e-shopper cohort by 6 percentage points.

Low–income online Americans are more likely to see the risks of online shopping than herald the time-saving or convenience benefits of using the internet to shop.

Internet users who live in lower-income households (defined as households with annual incomes below $25,000) are less likely to trust the e-commerce environment. Their concerns about their financial safety online make them reluctant to make full use of e-shopping. Their attitudes about online shopping stand in sharp contrast to those of upper income online Americans. 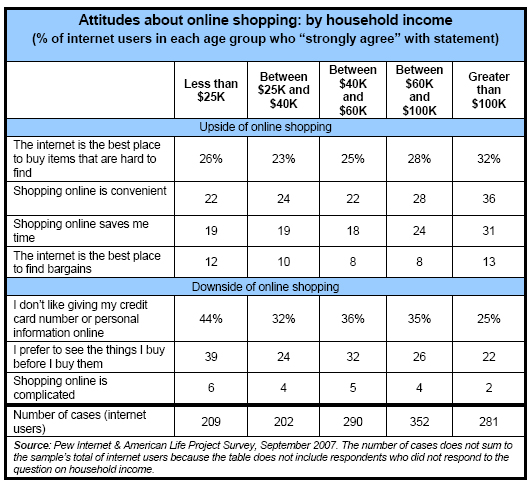 The number of people using the internet to do research about products or to do transactions online has grown since 2000, but revenues for online sales have increased at a much faster rate.

The big picture: Shopping on the internet has become commonplace among internet users for a number of different activities connected to researching and doing transactions online.

Four in ten Americans now use of the internet for banking, up from one quarter in early 2005.

When asked whether they have ever used the internet to do any banking online, some 39% of Americans said they had. This is an increase from 27% since February 2005.

One in four American adults now turns to online classified ads or sites such as Craig’s List, up from one in seven in early 2005. 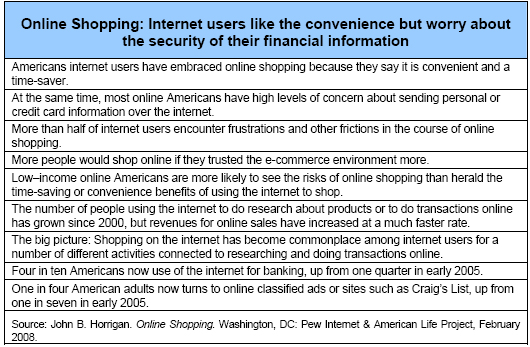