The table below compares the demographic characteristics of the two-thirds of online users who have bought a product online such as books, music, toys, or clothing to online Americans who have not made a product purchase on the internet. 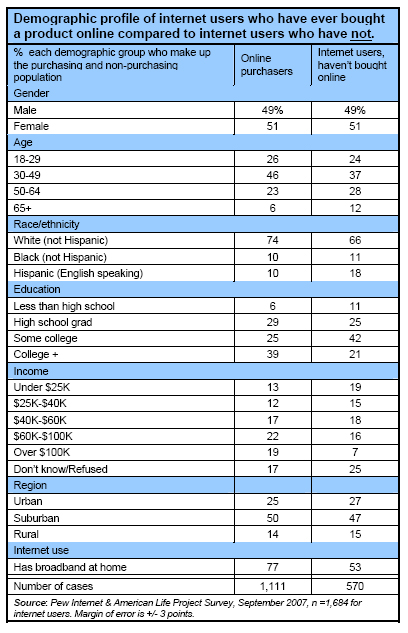 Some expected demographic factors account for some of the differences between online shoppers and other internet users. Online purchasers tend to be younger, better educated, and higher-income than those who have not bought a product over the internet. Technology may also play a role, as online buyers are more likely than non-buyers to have “always on” high-speed connections at home.

Nonetheless, several hypotheses about online shopping do not hold up. For instance, some have wondered whether rural internet users would be heavier participants in e-shopping because of the convenience of doing things online rather than driving relatively long distances. Our data do not bear that out, as 65% of rural internet users have at one time bought something online, about the average. Rural internet users are less likely, on the typical day, to do any of the online shopping activities listed earlier; 19% do one of those activities on the typical day compared to the 26% average for all online users.

It is also worth noting that internet users who have not bought a product online are hardly, as a group, suffering from an impoverishment of connectivity. More than half of non-purchasers have broadband at home. Readers interested in demographic detail on a range of online shopping activities should consult the table in the Appendix to this report.

The table suggests that demography and technology are not the entire story behind people’s predilections to purchase products online. Even though online Americans who do not shop online have lower incomes and are less likely to have broadband at home, the majority of low-income Americans have bought something online. Some 58% of people whose annual household incomes are below $25,000 have at one time bought something using the internet. Something else might explain differences between purchases and non-purchasers. Our findings suggest that attitudes play a critical role in shaping people’s tendencies to shop online.

Internet users like the convenience and time-saving potential of online shopping, but they also worry about sending personal or credit card information over the internet.

Americans find online shopping a convenience, a time-saver, and a good way to get items that would otherwise be hard to find. Solid majorities of Americans saying they either “strongly agree” or “agree” with propositions relating online shopping to these notions. 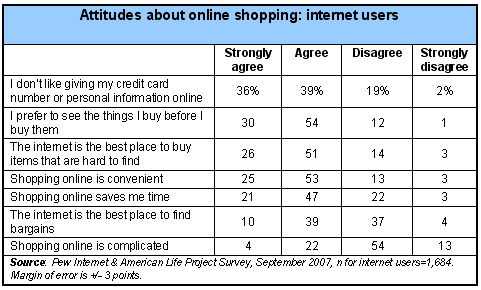 At the same time, tensions and concerns are evident in people’s perspectives on cyberspace as a place to shop. Fully three quarters (75%) either “strongly agree” or “agree” with the statement that they don’t like giving their credit car number or personal information online.

Young adult internet users see the internet as a place for finding bargains, things that are hard to find, and as a means to save time on shopping.

Although a majority (or near majority) of all internet users see the internet as a place to get bargains, the hard-to-find-item, or as a time-saver, these attitudes and other differ across age categories. 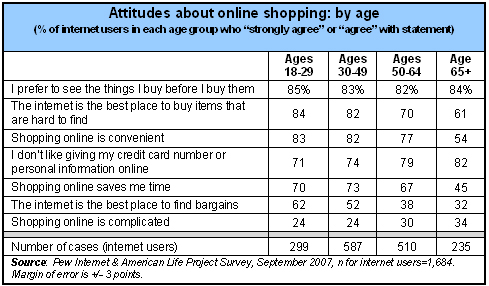 Online adults under age 30 are twice as likely as senior citizens to see the internet as a place for bargain shopping and far more likely than seniors to see the convenience and time-saving benefits of online shopping.

Fully 79% of internet users are confident that they will make the right purchasing decision as they gather information online in advance of buying something. Most (63%) report a sense of relief in the course of online information-gathering, as that key online nugget may clarify a specific need. Just more than half (53%) are eager to share what they have found online pertaining to shopping. 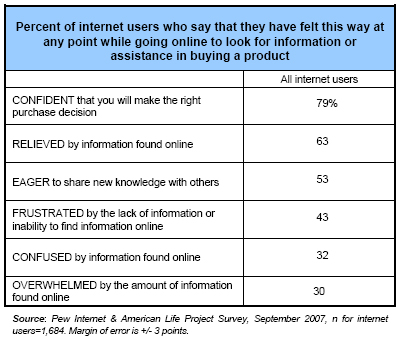 Perceptions about the convenience of online shopping and worries about sending personal information online are the biggest determinants of whether people shop online or not.

The preceding discussion shows that attitudes, technology, and socio-economic factors all come into play in influencing people’s choices to shop online. Which factors matter more? Statistical analysis that enables the relative effects of different factors to be pulled apart suggests that several attitudinal measures strongly shape whether or not people shop online.6 The baseline for analysis in this section is users’ response to the question about whether they had ever bought something online such as a book, toy, clothing, or music, to which 66% of online users responded “yes.”

The effects and their size listed below are independent of all other factors, that is, the figures show how the probability of someone shopping online would change if, say, he thought online shopping was convenient, while holding all other factors, such as other attitudinal measures, constant.

User concerns about sending personal or credit card information over the internet has the largest effect among several key attitudinal measures. If the 75% of internet users who “strongly agree” or “agree” that conveying this information online is problem for shifted their views on this proposition, the share of the online population engaging in online shopping would be 7 percentage points higher than the present level (or 73% instead of 66%).

Users’ perceptions of online shopping as a convenience has a significant impact on the chances internet users are participants in the online marketplace. As noted, most internet users already think online shopping is to some extent convenient; 25% strongly agree that it is, 53% agree, with 16% either disagreeing or strongly disagreeing that is. If the 16% of online users who disagree that it is convenient were tipped into the “agree” column, the share of the online population engaging in online shopping would be 3 percentage points higher than the present level (or 69% instead of 66%).

Improving online users’ comfort levels with sending personal or credit card information over the internet would have the biggest payoffs for expanding online shopping.

Finally, technology makes a difference in whether people buy things online or not. People with broadband at home are more likely than dial-up users to have bought something online, by a 74% to 59% margin, a difference that is significant even when socio-economic and demographic characteristics are taken into account. If existing dialup users had high-speed connections at home, the incidence of online shopping would be 6 percentage points higher than it presently is.

It is important to underscore that the above figures are estimates, but they do convey the magnitude of the different things that influence the probability that someone will execute a transaction online. If efforts were devoted to changing attitudes about online shopping, the greatest payoffs would come from improving online users’ comfort level with sending personal or credit card information over the internet.