Fifty-six percent of Latinos in the U.S. use the internet.

Latinos comprise 14% of the U.S. adult population and about half of this growing group (56%) goes online. By comparison, 71% of non-Hispanic whites and 60% of non-Hispanic blacks use the internet. Several socio-economic characteristics that are often intertwined, such as low levels of education and limited English ability, largely explain the gap in internet use between Hispanics and non-Hispanics.

Just one in three Latinos who speak only Spanish go online.

Differences in levels of education and English proficiency explain much of the difference in internet usage between Hispanics and non-Hispanics.

Internet use is uniformly low for whites (32%), Hispanics (31%), and African Americans (25%) who have not completed high school. However, 41% of Latino adults have not finished high school, compared with about one in ten non-Hispanic whites and one in five African Americans. The same pattern is evident at the other end of the spectrum of educational attainment. College-educated adults all have equally high levels (about 90%) of internet use regardless of race or ethnicity, yet the college educated make up a smaller share of the Latino population when compared with non-Hispanics.

A statistical analysis of the survey results shows education and language are each highly significant factors when other differences in group characteristics are taken into account. When the different levels of language or education are controlled statistically, Hispanics and non-Hispanics show similar levels of internet use.

Latinos are less likely than whites to have an internet connection at home.

Some Latinos who do not use the internet are connecting to the communications revolution in a different way – via cell phone. 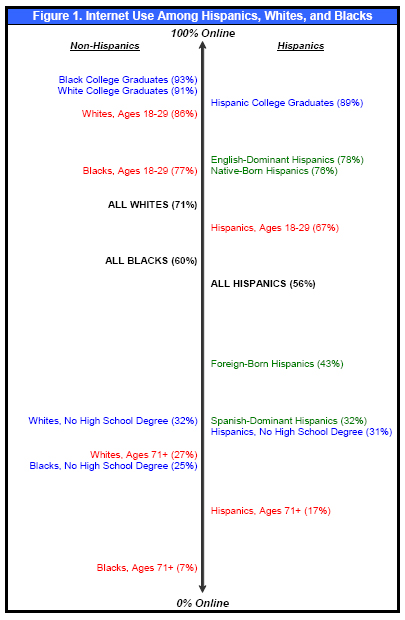