The type of community in which a person lives is not a very significant predictor for Internet use. Age, income and educational attainment are stronger.

Rural communities differ significantly from urban and suburban areas in terms of demographics such as age, income and educational attainment. These variables, among others, are strong predictors for Internet use. Statistical analysis that examines the principal drivers for differences in Internet penetration by geographical type suggests that some of the differences are driven by Internet adoption patterns among low-income rural individuals.  Living in a rural area in itself has little or no influence as to whether one goes online.  However, low-income people in rural areas are less likely to be online than low-income people living in urban or suburban areas; Internet adoption among middle and upper income people is similar across community type.7 Regression analysis shows that, in some (but not all) model specifications, living in a rural area is a modestly negative and significant predictor of Internet adoption at the 10% level of significance. The interaction of income and being a rural resident is, however, significant; this means that the significance on Net adoption of living in a rural area varies by income level. This is the basis for the finding that low-income residents of rural areas are less likely to be online than low-income residents of urban or suburban locations.] In each community type, Internet users are evenly split in terms of sex.

Rural residents are older than suburban and urban residents, and this probably affects Internet penetration rates.

The rural population is older than that of the suburbs and the cities. Rural populations are composed of a higher percentage of residents 65+ (22%) than are suburban (16%) or urban (14%) populations. In rural communities, seniors account for 22% of the population and about 6% of rural Internet users. Furthermore, rural seniors are less likely to go online than seniors in urban and suburban communities. About 17% of rural seniors go online. By comparison, 21% of urban seniors and 25% of suburban seniors do so.

Young adults are more likely to go online than middle-aged adults and seniors, but there are fewer young adults in rural areas. 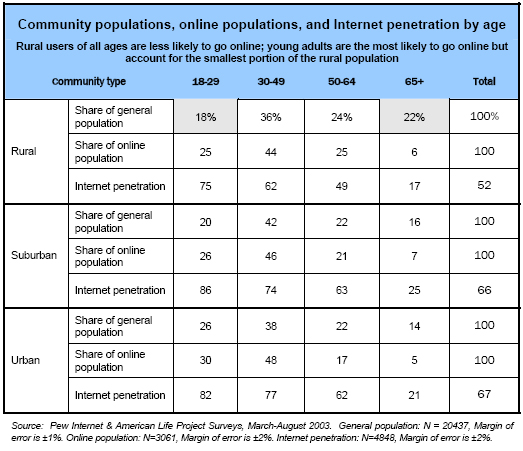 Educational attainment is associated with Internet use in rural communities as elsewhere.

Residents with advanced degrees make up a smaller portion of the rural population than the urban or suburban population.

A substantial percentage of rural residents have taken some college courses (20%), slightly fewer than suburban (25%) and urban residents (24%). Rural areas hold the highest percentage of residents who completed their formal education when graduating high school. College graduates, who are very likely to be Internet users, make up a smaller percentage of the rural population than they do the suburban and urban populations. About 10% of the rural population holds a four-year degree, while about 20% of the urban population and 18% of the suburban population are college graduates. Rural communities also contain larger percentages of residents with less than a high school education than do suburban and urban communities. These educational levels are correlated with low Internet penetration rates. A table displaying these figures can be found in Appendix B.

Nearly half of the rural households earn under $30,000, which is a significant threshold for Internet use.

In rural areas as elsewhere, the likelihood of going online rises as income rises. Lower levels of income than urban and suburban populations characterize the rural population as a whole. The percentage of the population living in households earning under $30,000 a year is larger in rural areas — 47% — than in suburban areas (29%) and urban areas (39%). This is significant because the $30,000 mark is a significant threshold for going online in all community types. While about 40% of rural residents living in households earning $20,000-$30,000 go online, 66% of rural residents who live in households earning $30,000-$40,000 go online. Similar increases occur in urban and suburban penetration at that $30,000 breakpoint. And, when income reaches the $30,000-$40,000 range, penetration rates in each community type exceed the national rate. A table displaying these figures can be found in Appendix B.

Rural residents who live in households earning under $10,000 a year are less likely than urban and suburban users with similar incomes to go online.

A difference appears when comparing Internet penetration rates in the lowest income bracket across community type. In urban and suburban areas, about a third of those adults living in households earning less than $10,000 go online. By comparison, in rural areas 19% do so. With income held constant, this gap of 17 percentage points can be explained in large part by age. 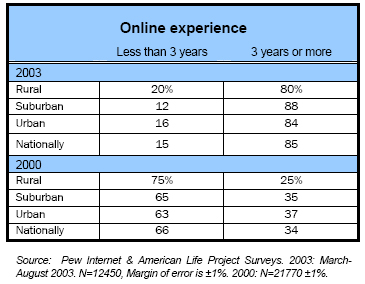 As the Internet matures, more newcomers are arriving from lower income brackets.

Among newcomers, about half of rural and urban newcomers have family incomes under $30,000. This represents a significant difference from the income portrait of newcomers two years ago. Then, in each community type, a larger percentage of newcomers lived in families who live in households earning over $30,000 a year.  These figures suggest that Internet use is diffusing into the lower income brackets as these users not only make the leap online, but also sustain their interest through the years. 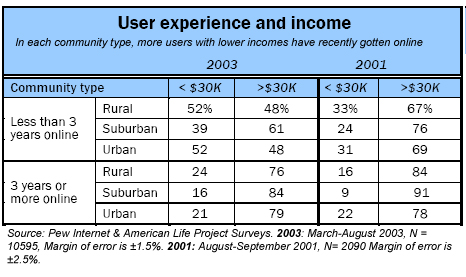 The ethnic makeup of urban and suburban user populations is changing as more African-Americans and Hispanics get online, but rural communities are relatively unchanged. 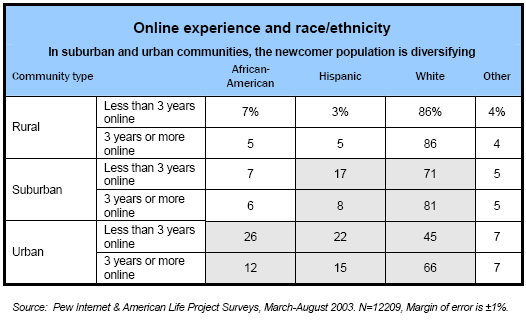 Rural Areas and the Internet Part 1. Rural Internet Access: Deployment and Availability
Part 2. Rural Internet Demographics: Who’s Online?
The type of community in which a person lives is not a very significant predictor for Internet use. Age, income and educational attainment are stronger.Rural residents are older than suburban and urban residents, and this probably affects Internet penetration rates.Educational attainment is associated with Internet use in rural communities as elsewhere.Nearly half of the rural households earn under $30,000, which is a significant threshold for Internet use.African-Americans who live in rural areas are much less likely to use the Internet than their urban and suburban counterparts and much less likely to be online than rural whites.Rural communities hold a larger percentage of Internet newcomers than urban and suburban communities.
Part 3. The Activities Rural Internet Users Pursue Part 4. Rural Attitudes Toward the Internet Methodology Appendices